Captain Smasher is one of the secondary antagonists in the 2016 third-person shooter game Plants vs. Zombies: Garden Warfare 2. He is a gargantuar pirate who takes parts in fighting plants.

In Gifts a Plunder, the players have to open Dave-bot 3000.1's gift in Sandy Sands. After the gift is opened, Captain Smasher comes out and attacks them. The players have to survive until Crazy Dave picks them up with his RV.

During the battle, Captain Smasher continuously attack the players with his cannon and his Pirate Zombies army. The players have twenty minutes to defeat him. However, if not, they will be defeated.

Captain Smasher also puts his curse on the players, as they should find curse proofs, which are Barrel Pirates. They have only a short amount of time to remove it by defeating them, or they will be defeated.

After defeating Captain Smasher, the players earn coins as a reward, and the achievement Curseproof. 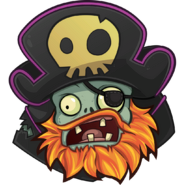 His icon
Add a photo to this gallery

Retrieved from "https://villains.fandom.com/wiki/Captain_Smasher?oldid=3583507"
Community content is available under CC-BY-SA unless otherwise noted.