Captain Spaulding is a major antagonist in House of 1000 Corpses, the tritagonist villain of The Devil's Rejects, and a minor yet pivotal character in 3 From Hell. He is a member of the group of killers known as the Firefly family.

He is the father of Baby Firefly (who he is fiercely protective of) and possibly Otis B. Driftwood, although this is uncertain. He runs a roadside attraction called Captain Spaulding's Museum of Monsters and Madmen near Ruggsville, Texas, which includes a murder ride detailing the acts of several serial killers. He dresses up as a clown and sells fried chicken. He often uses this establishment as means of directing more victims toward the Firefly house. Captain Spaulding's real name may be "Cutter", but it may just be another alias.

He was portrayed by the late Sid Haig.

Captain Spaulding is only a supporting character in the first film, and most of his scenes take place in his shop. He directs Jerry Goldsmith, Bill Hudley, Denise Willis, and Mary Knowles in the direction of the Firefly house, where they are terrorized by the Fireflies, especially Baby and Otis. When police Lt. George Wydell goes looking for them after Denise's father Don reports them missing, He directs him to the house as well, where Wydell, Willis, Deputy Steve Nash are killed. He later picks up Denise, the only survivor of the ordeal, and takes her right back to the house.

About one year after the events of the first film, Sheriff John Quincy Wydell, brother of George, led a police raid on the Firefly house. Captain Spaulding met up with Otis and Baby, the only two to escape, at the Kahiki Palms Motel. He then took them to the whorehouse owned by his friend Charlie Altamont. Wydell, who had been slowly going insane after learning of his brother's death, traced them to Altamont and pressured him into giving them up.

Wydell raided the whorehouse, taking the three fugitives back to the Firefly house, where he tortured them. Captain Spaulding had a picture of George Wydell stapled to his chest, while the others were tortured in a similar manner. Spaulding and the others were saved by Tiny, a family member who wasn't caught because he had been away from the house. When they tried to get away, they realized the police had blocked the road to arrest them. Knowing that one way or another they gonna die, the rest of the Firefly family drove directly at the blockage and opened fire at the cops only to be shot and wounded.

Captain Spaulding appears on the news coverage of the murder trials of the Firefly Family. Despite widespread protest, Otis B. Driftwood, Vera-Ellen "Baby" Firefly, and Captain Spaulding are all found guilty and sentenced to death. In a prison interview, Spaulding maintains his claim that he is innocent, and was railroaded by the system for being an average clown. The interviewer says that average clowns usually aren't convicted of 38 murders, like Spaulding was, causing him to laugh hysterically. Shortly after, a breaking news bulletin announces that Captain Spaulding was executed via lethal injection. 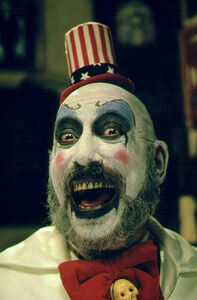 The portrait of Captain Spaulding.
Add a photo to this gallery 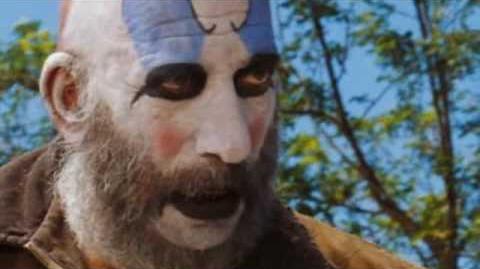 "Why do you hate clowns?" The Devils Rejects
Add a photo to this gallery

Retrieved from "https://villains.fandom.com/wiki/Captain_Spaulding?oldid=4120573"
Community content is available under CC-BY-SA unless otherwise noted.