Suppress dissent and resistance to the Franco regime (failed).

Captain Vidal is the main antagonist of the 2006 Spanish dark fantasy film Pan's Labyrinth and its 2019's novelization.

He was portrayed by Sergi López, who also portrayed Harry Ballestero in With a Friend Like Harry....

Captain Vidal is Ofelia's new stepfather and the father of Carmen's unborn child, as well as the son of a famed commander with the same name who died in Morocco, who believes strongly in fascism and was assigned to root out any anti-fascist rebels.

When Ofelia met Captain Vidal after she and her mother Carmen arrived at the mill, she tried to greet him nicely with a simple handshake. But Vidal firmly grabbed her left hand and tells her that she'd always give out a left handshake. From that moment on, he shows severe dislike for the girl.

Later one night, Vidal's cruelty and sociopathic nature is revealed when he brutally and mercilessly murders two innocent farmers, a father and son, who had been detained on suspicion of being rebellious allies. In truth the men were hunting rabbits but Vidal refused to allow them to finish their story, instead mercilessly beating the son's face in before killing the father and almost killing one of his own men in the process.

Ofelia becomes worried about her mother, whose condition is worsening. The faun gives Ofelia a mandrake root, which instantly begins to cure her mother's illness.

Meanwhile, Vidal becomes increasingly vicious and aggressive, torturing a captured rebel and then killing the doctor who euthanized the tortured prisoner to stop his pain. Vidal catches Ofelia tending to the mandrake root, and Carmen throws it into the fireplace, where it then begins to writhe and scream in agony. Instantly, Carmen develops painful contractions and dies giving birth to a son. Vidal eventually discovers that his maid Mercedes is a spy, and he captures her and Ofelia as they attempt to escape. Ofelia is locked in her bedroom, and Mercedes is taken to be tortured; however, she frees herself, badly injures Vidal with a knife, and flees into the woods, where her brother Pedro and his fellow rebels rescue her.

The faun returns to Ofelia and gives her one more chance to prove herself. He tells her to take her baby brother into the labyrinth. Ofelia steals the baby after sedating Vidal; although enduring massive blood loss and disoriented, the evil and treacherous man continues to chase her through the labyrinth while the rebels attack the mill. The faun tells Ofelia that the portal to the underworld will open only with an innocent's blood, so he needs a drop of her brother's blood. Despite her hatred towards Vidal, Ofelia refuses to harm her brother, and the faun leaves Ofelia to her choice. Around the same time, Vidal arrives and takes the baby away from Ofelia, then pulls his gun and fatally shoots her to death.

When Vidal leaves the labyrinth, Mercedes and the armed rebels are waiting for him after finishing off his remaining soldiers. Realizing now that he has lost and knowing that he will die as he is completely outnumbered, Vidal surrenders himself by calmly handing over his son to Mercedes. He takes out his pocket watch and tells Mercedes to inform his son about his own death so that he can carry on his legacy. However, Mercedes refuses by coldly telling him that his son will never even know his name, implying that she won't carry on Vidal's legacy to his son, much to Vidal's shock. Pedro draws his gun and shoots Vidal in the right cheek, killing him and avenging those (including Ofelia) who perished by his hands.

Despite being a simple human being, Captain Vidal is much more terrifying than the fantastical monsters in the same work. He was an authoritarian and despotic fascist with a strong belief that all men are not born equal. Over the course of the film, multiple interactions with other characters show that Vidal exerts dominance over everyone he interacts with and enforces it with brutal violence.

He was a sadistic, cruel, ruthless and treacherous madman who killed, tortured, and defiled for sheer enjoyment. He cared little for nearly anyone or anything, having no compassion for human life and was rarely depicted as anything other than a force of great evil. In fact, his speech regarding his growing trust of his victims as he tortures them implies that he best relates to others when he is inflecting agony on them and his power is absolute.

Vidal only seemed to care about his authority and his son. While he did display a charming and concerned side towards his wife Carmen, there are many implications that he only cared about his wife because she was carrying his son. He grew extremely threatening and aggressive when his enchantment's doctor suggested his, then unborn son, might be born a girl. Also, it is strongly implied that his concern for his son is only because he projects his own father problems onto his child and therefore, Vidal is more concerned with preserving his inheritance than with actually taking care of a child.

Vidal immediately dislikes Ofelia, possibly because she is a girl or because she is not his child. As the Ofelia acts as a free spirit outside of his authority, Vidal's dislike of her grows. This dislike finally turns to murderous intent when Ofelia tries to take her brother away from Vidal.

Captain Vidal is also obsessed with military culture and ethics. He took to heart that his own father, a general of the same name, died bravely and broke a watch so that Vidal had the knowledge of the exact time his father died. He tried to repeat the gesture for his own son when he found himself at the mercy of his rebel enemies. When he was told by Mercedes that his son would never know his name, Vidal despaired and died in fear. Vidal died as a cruel and oppressive madman with his worst fear being realized: he would leave no legacy for his son.

He seems to think he is morally superior to those around him and seeks to control everyone he comes in contact with. He has delusions that his actions will result in a "clean, pure Spain" for his son to grow up in. Del Toro has said that in Vidal's own mind, he is convinced that he is acting for the good of the community, and he is incapable of seeing anything he does as wrong.

Another of the few positive qualities in him (though not enough to redeem him) is that he is undeniably brave as he leads his troops in the front against the rebels, extolling the virtues of an honorable death in battle, and faces his death with almost inhuman detachment.

He's relatively decent and professional to his subordinates. However, the reality is he doesn't care for them much. For example, when he questions the hunters, he asks his men to detain them. When his patience gets tired, and he shoots the elder, he doesn't even bother to warn the soldier who is holding him back to moving. If the soldier had not noticed it alone, he would have been killed with the hunter. Also, later in the movie, he shoves Garcés away in mid-sentence when he informs him that the compound is under attack. 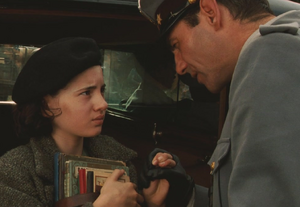 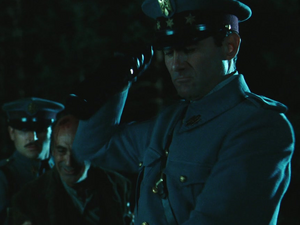 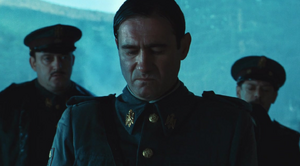 Captain Vidal and his thugs. 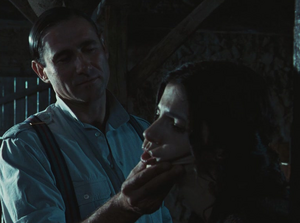 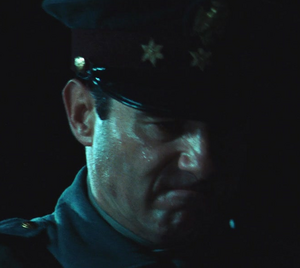 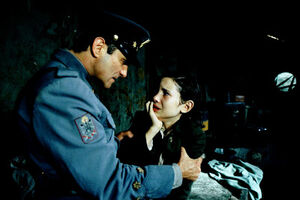 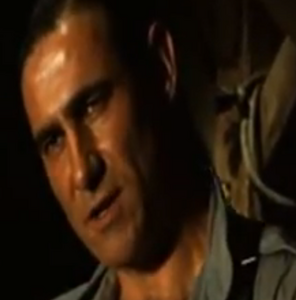 Captain Vidal smirking evilly as he interrogates his hostages. 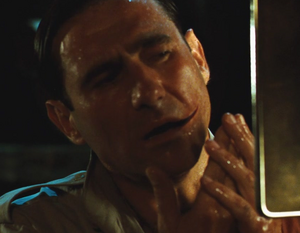 Captain Vidal slashed across the face. 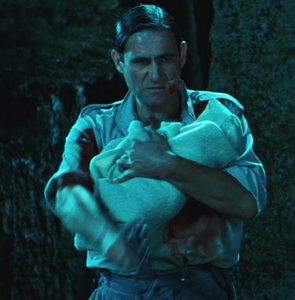 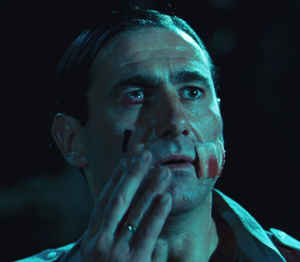 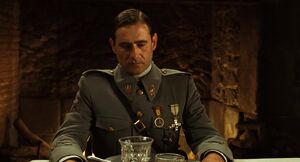 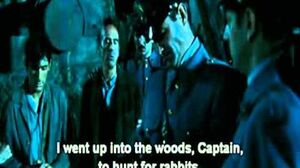 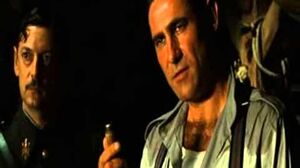 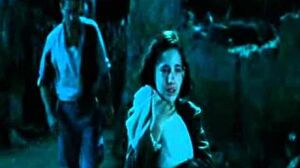