Capungo is a minor antagonist of the 1964 James Bond film Goldfinger. He is a thug who works for a drug lord named Mr. Ramirez.

He was portrayed by the late Alf Joint.

Capungo was involved in Mr. Ramirez's plot of selling heroin through bananas. However, this was not the case when British agent James Bond raid the heroin laboratory by blowing it up. Upon being told by his contact that he needs to leave the scene, Bond meets a cabaret dancer named Bonita in her dressing room.

Needless to say, Capungo is hiding inside the dressing room, being order by Mr. Ramirez to kill Bond in revenge for destroying his business. However, Bond notice Capungo through the reflection in Bonita's eye and engages into a fight, eventually pushing him into the bathtub filled with water. Capungo tries to reach for Bond's gun, but Bond throws an electric fan into the water, fatally electrocuting Capungo to death. 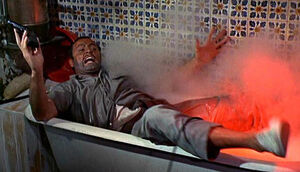