Capture Ciri for his king Eredin.

Over centuries, Avallac'h bred the most talented navigators and ice wizards and combined their offspring in order to create the perfect navigator. The result was Caranthir, who was trained by Avallac'h himself.

Geralt first spots Caranthir while investigating old elven ruins for Ciri. Accompanied by Eredin and Nithral, Caranthir searches the ruins as well. Geralt recognizes Caranthir as a navigator and Caranthir indeed uses his powers to teleport the Wild Hunt through the ruins, giving them an advantage as Geralt has to travel through the ruins to catch up to them. Eventually, Geralt catches up with the Wild Hunt and Caranthir creates portals through which the White Cold, an ice storm created by the Hunt, bursts in. Geralt and Keira Metz are forced to close the portals before following Caranthir further. After realising that Ciri can't be found in the ruins, Caranthir and Eredin leave through a portal. Nithral stays behind to battle Geralt.

During the battle of Kaer Morhen, Caranthir joins in mid-battle. Arriving through teleport, Caranthir and members of the Hunt arrive inside the castle where they are confronted by the witcher Eskel. Eskel engages Caranthir and, during the battle, cuts off part of Caranthir's staff. By using his teleport magic Caranthir gains the upper hand and knocks down Eskel. Before he can strike the witcher down, Ciri appears to continue the fight. During their battle, a horn sounds which acts as a signal for Caranthir. He leaves the yard through a portal but leaves his men to fight Ciri. Caranthir then rejoins Eredin and uses his enormous magical powers to break the barrier Yennefer built around the castle. He succeeds and immediately creates a snowstorm which blasts the castle gates and freezes every fighter inside, except Ciri and Vesemir. Caranthir and the Wild Hunt enter the castle, Caranthir casually strolling past Geralt. He watches as Imlerith executes Vesemir.

However, the grief over the death of Vesemir unleashes Ciri's powers and knock the Wild Hunt off their feet. Watching the hunters fall one after one, Caranthir decides to act. He at first creates a portal for Imlerith to escape through and, despite the pain Ciri's magical scream is causing, grabs Eredin, who tries to get to Ciri, and drags him through another portal.

When Geralt and his companions use the sun stone to draw the Wild Hunt to Undvik, their ship 'Naglfar' indeed arrives on the shores of Undvik. However, Caranthir then steps close to the railing and reveals that he anticipated the trap. He once more releases the White Cold which freezes the nearby ocean and the shore, creating a vast ice plateau around the coast of Undvik. While Geralt and the Nilfgaardian fleet are frozen by the White Cold, Ciri, who is watching from a distance, enters the ice plateau to stop Caranthir. Meanwhile, Caranthir uses his navigator magic to bring hordes of Aen Elle from their world to Geralt's.

Battling through the hordes of Wild Hunt warriors, Ciri eventually arrives on the ice platform underneath the Naglfar where Caranthir awaits her. During their fight, the two use their powers to teleport around to ambush the other from behind and are thus both forced to anticipate the others' moves. Outsmarting Caranthir, Ciri manages to slash the wizard's chest and to break his staff. This closes the portal through which the frost leaks in. The resulting energy blast also knocks Ciri off her feet. Caranthir tries to grab the knocked-out Ciri but in the last moment she teleports to safety. Turning around, Caranthir sees that Geralt has freed himself out of the ice. Geralt then continues Ciri's fight with Caranthir, dodging the energy blasts the wizard lunges at him while also duelling the ice golems Caranthi creates mid-battle. After defeating the golems, Geralt drives his sword into Caranthir's chest and twists the blade. Caranthir falls to his ground but, although mortally wounded, manages to teleport himself and Geralt to the ground of the ocean in the hope to drown the witcher. However, Geralt reaches the surface in time while Caranthir's corpse sinks to the ground.

This Aen Elle elf was one of Eredin's advisors and also, on account of his extraordinary abilities, an important officer of the Wild Hunt. Calling on arcane magic Caranthir would guide the Riders of the Hunt along mystic pathways through time and space in order to reach other worlds.
He was also a master of more immediate forms of transport, such as the teleportation he made ample use of during the attack on Kaer Morhen.
Yet even with his tricks and spells Caranthir still died during the final battle against the Wild Hunt, his body swallowed up by the cold waters of the ocean. 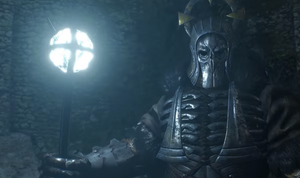 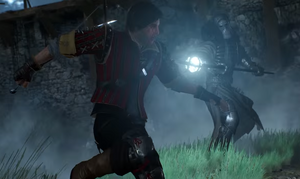 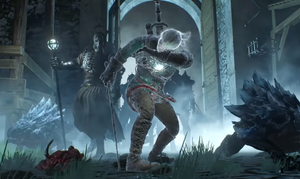 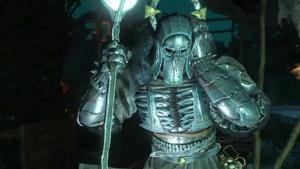 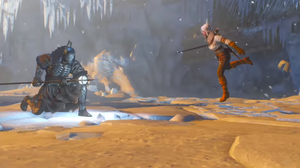 Caranthir battling Ciri on the shores of Undvik. 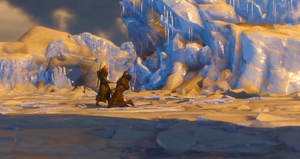 Caranthir killed by Geralt.
Add a photo to this gallery

Retrieved from "https://villains.fandom.com/wiki/Caranthir_(Witcher)?oldid=3556648"
Community content is available under CC-BY-SA unless otherwise noted.