The Carcer City Police Department are an antagonistic faction in the controversial stealth/horror game Manhunt.

After James Earl Cash flees from Darkwoods Penitentiary, Ramirez is sent out to hunt Cash down, only to fail and perish. Lionel Starkweather then contacts Gary Schaffer, the chief, to get his men to capture Cash and the Journalist. Thus, the officers swarm the streets to hunt for Cash, presuming he is a hobo.

After killing the patrol, they guard the subway while also putting snipers on the roofs. After this fails, they get assistance from the SWAT to further guard the subway. This fails at first as Cash takes the subway to the train yard, but the SWAT force corners him, Cerberus exterminate the SWAT, and take Cash to Starkweather.

After Cash escapes the city, it is likely that the few alive officers were arrested if any of them were alive, and then replaced by the city's new team of police officers.

The CCPD are Carcer City's police. However, the police force is corrupt to the core, allowing Starkweather to continue his deeds though bribes, selling drugs, and attacking the homeless. However, despite their corruption, the police officers are shown to care about each other. They will be angered if they discover the body of one of their fellow cops, and attempt to defy Lionel Starkweather's orders and kill Cash for killing so many of them. 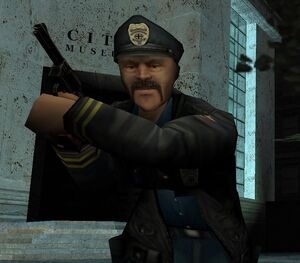 A CCPD Officer in Manhunt.