Being the brunt of the Queen's rage.

The Card Soldiers are the secondary antagonists of Disney's 13th full-length animated feature film Alice in Wonderland, which is based on the 1875 novel Alice's Adventures in Wonderland by the late Lewis Carroll. They are the loyal servants of the Queen of Hearts.

The Card Soldiers are loyal, cunning, serviceable and obedient servants who make up the Queen's military force and they always obey her orders. However, this is mostly due to the tremendous fear that they have of her rather than loyalty. They are first seen in the movie adaptation of "Alice in Wonderland" as they are depicted painting a rose tree red as the roses are red, which would easily infuriate the Queen. The cards can also live in fear, as it is evident where one card did not get to his designated spot during a game of croquet and thus was taken away to be beheaded.

The three card soldiers are seen painting the white roses red, while Alice makes her way into the garden of the Queen of Hearts. The cards explain that the white roses were planted by mistake and that they fear to behead if the mistake is unfixed. Seeing the seriousness of the situation, Alice offers to help them. However, the Queen soon appears and is shown to be extremely vituperative and cruel about the red paint instead of the white roses. When none of the cards confess to the "crime", she orders them to have their heads cut off. The three card soldiers are then dragged off by other cards.

Other cards act as croquet hoops when the Queen challenges Alice. The cards openly cheat to allow the Queen to win; they move, so that the Queen's ball can go through, but also make certain that Alice's ball cannot go through. One of the cards does not get to his spot in time, and so he is taken away to be beheaded.

During Alice's trial, anonymous card soldiers act as Alice's guards. They surround the defendant's box and stop Alice from escaping. Later, they chase after her as the Queen ordered them.

The cards are minor characters in the series and occasionally appear as contemptuous performers like Timon and Pumbaa. In Mickey's House of Villains, they locked all of the Disney heroes in the kitchen as the villains took over. However, they and the all of the other villains (except Jafar immediately scatter out the House before the House of Mouse is restored once again.

The card soldiers are present in the show with the Queen of Hearts and capturing the Evil Queen and the Mad Hatter when they visit Wonderland. However, they are non-anthropomorphic card soldiers. 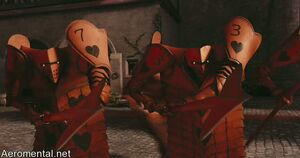 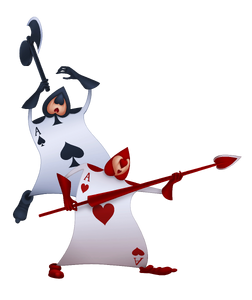 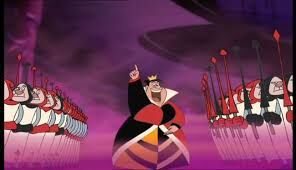 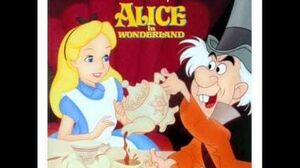 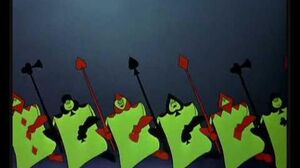