This article is about the version of the character in the RWBY Chibi spinoff comedy series. For the main series counterpart, see Cardin Winchester.

Beating up other students.

Learn how to become a better villain.

Cardin Winchester is a minor antagonist from the American animated comedy webseries RWBY Chibi, the non-canon spinoff to RWBY. In RWBY Chibi, he is portrayed as more outright evil, even to the point of trying to team up with Cinder Fall and Roman Torchwick.

He is voiced by Adam Ellis, who also voiced his canon counterpart.

In the episode "Evil Interview", Cardin goes in to interview with Cinder Fall, hoping to join in with her evil faction. She asks him for his qualifications, and he happily tells her about how he repeatedly beats up Jaune Arc and his friends, put pepper in Professor Port's mustache causing him to sneeze for a week, and will never pet dogs, no matter how cute they are. Cinder is impressed by how "evil" he is, but admits that they do not have an opening available at the moment. Just then, Mercury Black barges in, angry that he does all the work and is not treated well. He demands a raise and a cool hat like Roman Torchwick's. Cinder, however, simply lights Mercury on fire and sends him falling through a trap door. Cinder then offers Mercury's position to Cardin, who witnessed the event and is now afraid. He cowardly gets up and tells Cinder he will get back to her before fleeing. Cinder wonders why she can never find good help, then realizes it is because she keeps melting them.

In "Teenage Faunus Ninja Catgirl", Cardin approaches Roman about learning from him how to become a better bully and villain, to which Neo disapproves and thinks they should ditch him. Roman then robs a store and instructs Cardin to stand outside holding a bag of money while he and Neo escape, leading Cardin to get attacked by the angry store owner. Roman and Neo watch and laugh as Cardin takes the fall, oblivious to the fact he has been betrayed.

In "Cousins of Chaos", he is seen laughing at Jaune when his arm is bitten by a Beowolf.

In "Play With Penny", he is shown throwing and hitting rocks at animals such as squirrels and birds. He throws a rock at a crow, angering it. As he proclaims how dumb animals are, the crow reveals itself to be Qrow Branwen in his bird form, who rushes up and punches Cardin to the ground.

In "RWBY Dreams", he appears in Weiss' nightmare, where she dreams that she has learned all there is to learn and all of the other students tease her and call her a know-it-all.

Cardin's appearance is a cuter, more simplified ("Chibi") version of his canon appearance. He has short brown hair done up in a spike, pale skin, and purple eyes. He wears silver and gold armor consisting of boots, pants, and a chestplate with his emblem on it, with gray padding and a red cloth belt.

Though both versions of Cardin are sadists that like to cause pain to others, the Chibi version is more outright in his villainy. Even though his evil doings would be seen as minor in most situations, Cinder and the Chibi universe see them as wicked actions. Cardin likes to be evil and mischievous, and will perform his evil doings mostly for his own amusement. However, he is cowardly, as he is afraid of being betrayed by Cinder and unable to go all the way with his evil commitment.

It is also assumed that he is abusive and xenophobic towards the Faunus just like his canon counterpart. 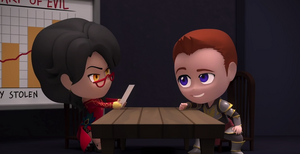 Cardin meeting Cinder for an interview. 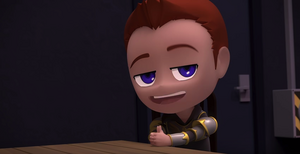 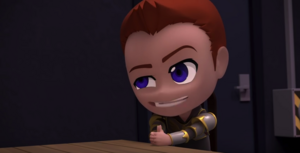 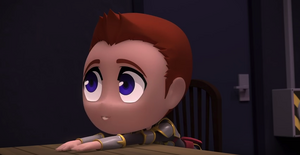 Cardin giving Cinder a history of his evil doings. 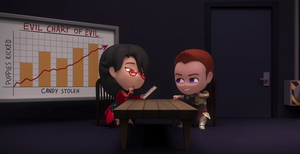 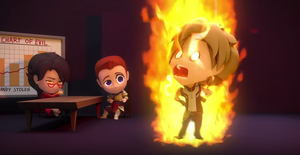 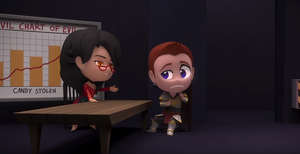 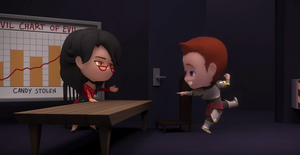 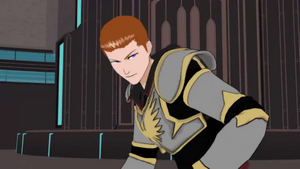 Cardin in the original show. 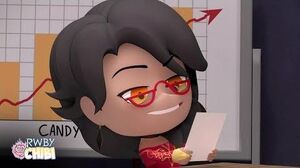