Cardinal of the Catholic Church

Questioning his faith (due to old age).

Aid Valek and the Masters in using the Black Cross in a reverse exorcism ceremony that will give vampires the power to survive against sunlight (all failed).

Cardinal Alba is one of the main antagonists in the hit 1998 horror film John Carpenter's Vampires, based on the 1990 novel Vampire$ by John Steakley.

He was portrayed by the late Maximilian Schell, who also played Dr. Hans Reinhardt in The Black Hole.

Cardinal Alba is an elderly Italian Roman Catholic cardinal of the Vatican. After Jack Crow, Anthony Montoya, and a prostitute named Katrina (who at that point is bitten) barely escape from Valek's surprise attack (where Crow's entire team is killed, along with numerous prostitutes), Jack meets up with Cardinal Alba. Jack reports that his entire team is dead (except Montoya) because of just one vampire, who somehow knew Jack's name. Alba introduces Jack to Father Adam Guiteau, and then shows a painting of a man who Jack recognizes as the master vampire who killed his team. This vampire is identified as Valek, a former Catholic priest who is the oldest known vampire and the first of his kind. Alba tells Jack to wait for a new team to arrive before trying to go after Valek, and that Guiteau will be the new priest for the new team.

Later, Jack gets tied to the end of his truck, Guiteau is cowering in a nearby store, and Montoya is severely wounded (including a bite in his neck). Numerous vampires, including Valek along with now 6 the 7 new Masters at his side, surround Jack. Cardinal Alba suddenly appears and tells Jack that his old age has caused him to question the existence of God, heaven, and hell, especially since he has never seen any miracles or visions. The thought of death was terrifying to him, so he decided to betray the Church and join forces with Valek and his people.

Cardinal Alba begins an ancient reverse exorcism involving the legendary Black Cross of Béziers which would give the vampire race the power to survive against the sunlight. Before Alba could finish the exorcism, Guiteau finds a shotgun in the store he was hiding in, and he then gets to the roof of the store to get a clear shot at Alba. The shotgun blast hits Cardinal Alba in the chest, killing him immediately. 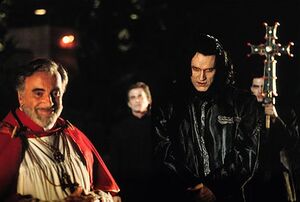 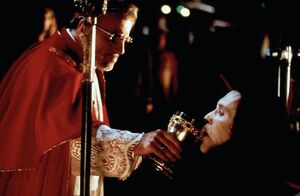 Add a photo to this gallery
Retrieved from "https://villains.fandom.com/wiki/Cardinal_Alba?oldid=3365227"
Community content is available under CC-BY-SA unless otherwise noted.