Ensure that no one will be able to change their class

Cardinal Sin is a minor antagonist in Dragon Quest VII.

Since Orgodemir understand the threats that the Alltrades Abbey is able to bring since it can create a hero, he ordered Cardinal Sin to take over the Abbey. Who ordered an army of monsters to attack it. Many guards are killed as the result. As for Jacqueline the high priestess, she was captured and imprisoned in a dungeon.

With his minions taken over Alltrades Abbey, Cardinal Sin came up with a villainous scheme.  Since he know that there will be travelers , who come to change their classes. He decided to steal their skills. He disguised as a high priest, and when travelers came to him for changing classes. After the travelers answered what classes they wanted to change to, Cardinal Sin will ask them to bathe in a pool behind him, which will steal their abilities. The powerless traveler is than sent to a town filled with tricked travelers. And the only way out of the town is through a long cave, however since it is guarded by Rasher and Stripes, who are monsters given the ability from travelers by Cardinal Sin, there is no way out since the duos are impossible to defeat.

To torture the people even more,  Cardinal Sin tells the people that the only way to reclaim their power is to use a weapon known as Soulstealer. The user can use this weapon to harvest the souls of other unlucky tricked travelers. Those who have their souls harvested will be taken to a settlement to guard the survivors from the battle of Alltrades Abbey.

He will give the powers back after the people harvested five souls. He than told than if they wanted freedom, they have to win in a arena fight for five times with other people that just got their power back. Cardinal Sin requires them to form a group of four. But since the people don't trust each other. They team up with monsters instead. As for those who have won for five times. They will meet Cardinal Sin, who explained the reason for his action is to strengthen Orgodemir. He will then kill the winner personally.

When the hero and his party arrived, they are tricked by Cardinal Sin and lost all of their power. However, they will soon get their power back and slain Rasher and Stripes. To their surprise, after winning for five times in the arena. They will see Cardinal Sin killing a warrior that has won in the last five battle. The party then enraged towards Cardinal Sin and destroyed him for good. The battle is so tough that after defeating Cardinal Sin, the party fall asleep for three days. Nevertheless, the people in Alltrades Abbey are freed once and for all.

Cardinal Sin is probably one of the cruelest minions of Orgodemir. He forced tricked travelers to harvest each others' soul and fight each other. 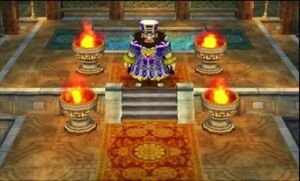 Cardinal Sin disguised as a human. 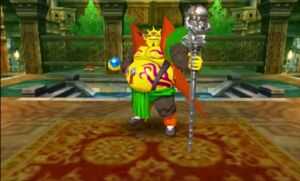 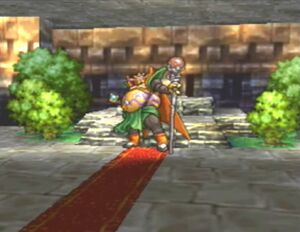 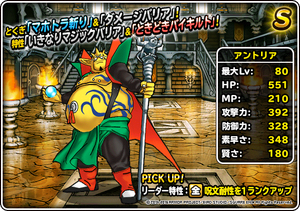