Very little is known about Carface's past apart from the fact that he and Charlie were once old friends as he tells Killer that the way to kill Charlie is "no way to treat an old friend."

Killer:Do you want me to squeeze his head with the pliers?

Carface:Killer. Killer. That is no way to treat an old friend.

He was once friends with Charlie but his greed as well as personal gain led to him going away from Charlie and wanting to kill him.

In All Dogs Go to Heaven

In the beginning of the film, Carface helps Charlie open up a casino and plans to kill Charlie because he finds him annoying and wants the casino to himself. So one night, they hold a celebration and he gets Charlie drunk. He then blindfolds him and tells him to wait for "a big surprise", starting up a car and putting it in drive causing it to hit Charlie, killing him and knocking his body into the sea.

Charlie's soul goes to Heaven where he learns Carface murdered him, and he vows revenge. He finds a way to escape from Heaven, but his guardian angel warns him that since he stole the watch he can never return. Charlie reunites with his partner Itchy and they decide to first upstage Carface with their own casino. Along the way, they stop at Carface's hideout and rescue a little girl named Anne Marie who can talk to animals. They decide to use her gift to make money and tells her that they will use her until they can find her a family. Meanwhile, Carface finds out that Charlie is alive and he took Anne Marie from him, so he plots revenge.

At one point, he tries to kill Charlie with a machine gun and Charlie survives because as long as he has the watch, nothing can kill him. Later, he attacks Itchy with his thugs and burns down Charlie's casino. Then he captures Anne Marie and Charlie comes to rescue her, fighting his way through the thugs. They eventually beat him up and begin to torture him. His howls of pain attract the attention of the flamboyant giant alligator, whom he and Anne Marie met earlier, who makes Carface's lair collapse. Carface falls into the water where he is eaten by the alligator.

At the end, Carface is seen in Heaven with Charlie, who had sacrificed himself to save Anne Marie and thus, was granted into heaven and Carface tries to escape.

In All Dogs Go to Heaven 2

In the sequel, Carface is more comic relief. He is now noticeably less evil, less intelligent and very cowardly which is very different than he was in the first one. He escapes from heaven with Gabriel's horn and encounters Red whom makes him his partner. He tricks and deceives Charlie and the gang many times. When Charlie asks Carface what he traded to Red for his collar, Carface assumes Red wanted the soles of his shoes, but he goes barefoot. It was then that Red reminds him it was his soul that he wanted, and he is eventually dragged to Hell by Red when he's defeated.

In All Dogs Go to Heaven: The Series

In the TV series, Carface is still a cowardly bumbling fool and he was portrayed more as a thief and antihero than anything. He runs a curio shop in the same building where he and Red ran their shady business in All Dogs Go to Heaven 2. His sidekick Killer also returns in the series.

In An All Dogs Christmas Carol

In the special, Carface is similar to Scrooge. Carface and Killer arrive at a Christmas party and start collecting debts from everyone. After Charlie refused to pay back Carface, he blows a mysterious hypnotic dog whistle that hypnotizes all the dogs and causes them to give Carface and Killer all of their bones. Before leaving, Carface and Killer make off with all the food, the presents, and their money which includes the operation money for a lame, limping (yet not complaining) puppy named Timmy (who belongs to a girl named Martha) and head off cackling. After failing several times to get the stolen goods from Carface, it is revealed that Carface is working for Annabelle's satanic cousin, Belladonna who plots to use a massive version of the gigantic hypnotic dog whistle to hypnotize every dog in the city into stealing the Christmas presents, making them be thrown out of their houses and abandoned, much in the same way Carface was when he was a puppy. Charlie plots to scare "the Dickens" out of Carface and asks Annabelle for some aid, resulting in them being transformed into characters from A Christmas Carol by Charles Dickens. Itchy becomes the Ghost of Christmas Past, Sasha becomes the Ghost of Christmas Present, and Charlie becomes the Ghost of Christmas Future (as a reference of The Mask). The three of them visit Carface and make him feel guilty about stealing the items, especially the operation money; Sasha tells Carface that without it Timmy will die, but Timmy's death will cause another his own, as the Ghost of Christmas Yet to Come shows him that because of his actions, he will cause his own death and he will be condemned to Hell for eternity. Carface, having seen himself in Timmy, stops the whistle just in time to prevent the dogs from stealing the gifts. Belladonna flies into a rage and is about to kill Carface and Killer when she is frozen solid by a massive amount of snow caused by Annabelle. Back at the party, Carface appears on a sled pulled by Killer, and gives the pups all the presents back, and more. He even gives them Timmy's money box back, which is filled up full. Carface turns to leave, and Sasha asks him to stay and join the party. Carface respectfully refuses, saying that he's going to visit his mom, but wishes everyone a merry Christmas.

Carface acts like a businessman saying that his victims must be dealt with in a "business-like way". In the first film he often tries to have his sidekick Killer killed but manages to convince himself not to each time. He is also a cruel villain. He often cares nothing for Killer and at one point tortures him by tying him in a sack and lowering him into the water upside down. When his henchmen also fail a mission when they are away he calls them "morons" and in the final battle, he viciously attacks Charlie and, at one point, tries to kill him by drowning him.

Like Judge Claude Frollo, he comes to fall in love with Anne Marie and tries to get her, even if it means killing Charlie.

In the second film Carface is now reduced to the secondary antagonist where he is now a comic relief character without the darker side in the first film. He is now less intelligent, less evil and is now very cowardly and nervous. Nonetheless his greed still remained when he told Red that when they got Gabriel's Horn they could open any safe or bank shop in the world and he still had his occasional evil laugh.

Carface is an obese American Pit Bull Terrier who usually walks on all fours. His stature suggests he has clubfoot because whilst other dogs walk with their fornt paws in front Carface's are turned in slightly as seen in a close up and a scene when he is about to kill Killer when he is sitting

Often Carface is seen wearing a purple (sometimes pink) shirt with it's sleeves always rolled up, a black waistcoat and a light green bow tie. In a scene in the first film  where he is shouting at Killer he accessorizes. In this scene he wears an old racing helmet with goggles and in a later scene with a ray gun he wears a dark green military helmet.

In All Dogs Go to Heaven 2 he still wears the same clothing but during "It Feels So Good to be Bad" his fur is cut off by a barber's knife and all he wears is his underwear which gets cut by a pair of scissors. Later on he gets dressed into a pink devil costume but later on gets his traditional suit as well his fur back. In the series his shirt changes to pink but in the christmas special it goes back to purple. 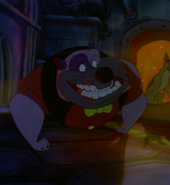 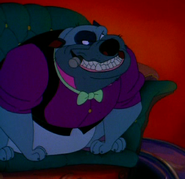 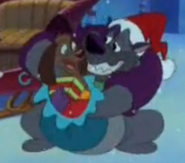 A now-reformed Carface smiling with Timmy

A drawing of Carface
Add a photo to this gallery

Retrieved from "https://villains.fandom.com/wiki/Carface_Carruthers?oldid=557396"
Community content is available under CC-BY-SA unless otherwise noted.