Leader of the Revolutionaries on one of Kaido's islands (formerly)

Kidnap Mermaids on Fishmen Island to sell them for profit (formerly).
Kidnap Shirahoshi (formerly).
Lead a rebellion against Kaido on one of his islands (formerly).

Caribou is a recurring antagonist in One Piece. He is a homicidal pirate who enjoys killing Marines. He first appeared in the Return to Saboady Arc. After his own cover story arc, Caribou appears as a prisoner in Udon Prison in Wano Country and is shown to work under the Beasts Pirates. He has since become an ally to Monkey D. Luffy.

He is voiced by Masaki Terasoma in the original Japanese version of the anime, and Andrew Kasten in the FUNimation English dubbed version.

Caribou is very sadistic and violent. He is known well for being very violent like his brother, Coribou. He dislikes the Marines and sees them as hypocrites. He feels justified for murdering them and thinks that his god will atone him for his actions. Caribou is manipulative and sees his opportunity to kill anyone and benefit from them like Demaro Black's pirate crew and the Straw Hat Pirates.

When he was left stranded on the Straw Hat's ship, Caribou pleaded for his safety and to spare him despite his previous intentions to destroy them. Even after staying with the crew, he still had the desire to murder them. However, they tend to realize that they are lying to them when he acts openly suspicious. He is also a greedy man, as he saw an opportunity to benefit from getting a lot of money by selling the mermaids on the black market.

Not much is known about Caribou's past but he was depressed when his grandmother passed away. She did tell him to always stay together and love one another. At some point, Caribou obtained the Numa Numa no Mi and formed a pirate crew by the name of the Caribou pirates. As a pirate, Caribou was responsible for killing many Marines and earned a bounty of 210,000,000 bellies.

Caribou first appeared on Sabaody Arc, he was planning on allying with Demaro Black's team. He spotted a Marine spying on them and stabbed him with a spear. He ordered his brother to bury him alive. Demaro began his speech about setting an example of Luffy for attacking him. He wanted Caribou make the captured Marine a hostage but the pirate ignored him. He also began attacking some of Demaro's crew members ruthlessly and ordered his men to bury them alive. As the Pacifista and Marines began storming the area and capturing the pirates, Caribou and his team manage to escape from the island.

They appeared underwater with the Straw Hat crew. Caribou wanted to kill them but his crew was overwhelmed by the Straw Hats and they were separated. Caribou was left stranded on the ship by himself with the Straw Hats and pleaded for his safety. Despite his pleas to stay clear of any danger, Caribou began scheming his plots to attack the crew which Franky noticed. The crew was split up before reaching the island and Caribou ended up in Fishman Island. He saw the Mermaids and wanted to capture them for profits. He later reappeared in the arc and he tried to capture Shirahoshi but he was stopped by the Straw Hats and Pekoms.

After the Straw Hats left, he tried to kidnap more Mermaids but he was caught by Jinbe. They left Fishman Island, Jinbe turned him into the Marines, and he was about to get executed. His Pirate team tried to save him but they got separated again. He ended up on one of Kaido's islands. He was rescued by an old woman who saw a resemblance as her son who was a Revolutionary by the name of Gaburu. After having his injuries treated, Caribou wanted to steal some of her belongings and leave. However, there was a house fire and he wanted to save her. Caribou stayed on the island longer and began helping the rebels fight off Kaido's forces. He was victorious at first but he was captured by X Drake.

Drake brought Caribou over to Wano Country where he was placed in prison in the Udon region. For some time, he was forced along with the other prisoners to do hard labor. He witnesses the prison guard, Dobon, getting angry at Luffy and Eustass Kid for eating too much food that he wants and saw them defeat the guard when he tried to punish them. A day after Luffy and Kid took down the prison guard, Dobon, Caribou is interested in becoming allied with Luffy. Luffy is not interested in joining forces with Caribou and suggests for him to join with Kid. Caribou disregards Kid as someone weak and for losing his arm to the Big Mom Pirates. Kid appears and frightens Caribou. Caribou witness Luffy and Kid arguing over taking down Kaido.

After Luffy and Hyogoro's battle against the Beasts Pirates at night time, Caribou appears with Raizo. It is revealed that Raizo had the keys to Caribou's cuffs and released him before the fights ended for the night. Caribou pleads with Luffy to forgive him for the bad things he did in the past and to let him onto his ship. Luffy agrees and decides to forgive Caribou much to his surprise. Caribou stands by and listens to Luffy, Hyogoro, and Raizo as they plan to get more allies within the prison. In the morning, Caribou and Raizo watches Luffy and Hyogoro as Queen and other Beasts Pirates are surprised at the amount of weight the two fighters gained from eating the O-shirukos. While helping Raizou, Caribou disabled the main snail responder in the prison causing Udon Prison to be cut off from communications in Wano. When the prisoners managed to take over the prison, Caribou tells Raizo that things went easy. 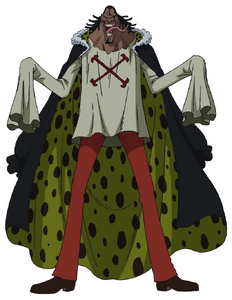 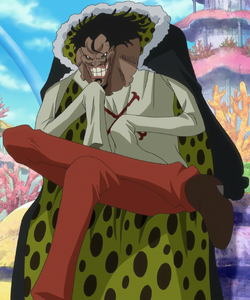 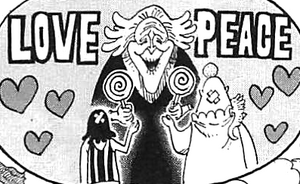 Caribou and Coribou with their grandmother. 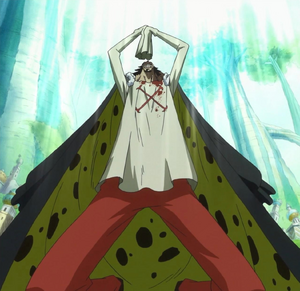 Caribou praying to a god to forgive the Marine that tried to shoot him. 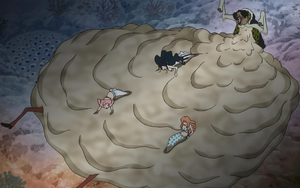 Caribou abducting some mermaids by absorbing them into his swamp. 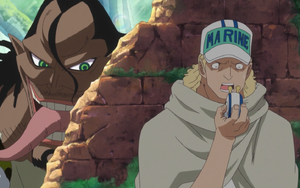 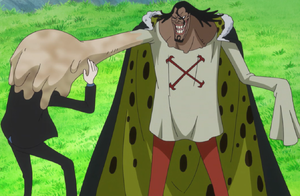 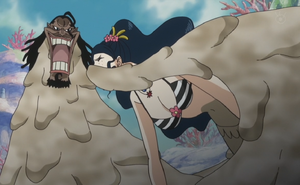 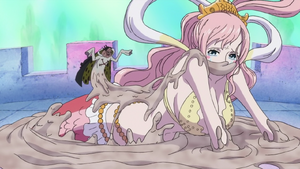 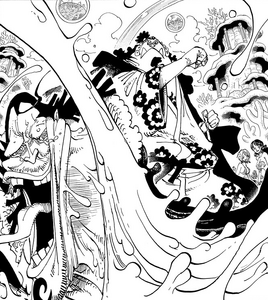