Middle School: The Worst Years of My Life

Bossing Rafe and Georgia around.

Washing and obsessing over his car.

Marry Jules Khatchadorian and get rid of her kids Rafe and Georgia (all failed).

Carl (also called "Bear") is a supporting antagonist in the 2016 live action film, Middle School: The Worst Years of My Life. He was the boyfriend and fiancé of Jules Khatchadorian and another one of Rafe's biggest enemies.

He was portrayed by Rob Riggle who also portrayed Mr. Walters, Aloysius O'Hare, Bela, and Mr. Dickers and Captain Lippencott and his twin brother Travis.

Carl was shown as a greedy, pompous, deceitful, manipulative, conniving, selfish, narcissistic, arrogant, and lazy man who thinks that he makes Jules' life better than her kids Rafe and Georgia. He constantly belittles Rafe and Georgia by always saying that Rafe is a messed up loser and Georgia is just a little girl, and cared more for his car (a red BMW) than anything else. He even hates Georgia's pet dog Calvin and tend to abuse him for his own pleasure, much to Georgia's disgust. However, this deplorable behavior incited a furious Jules to end her relationship with Carl in retaliation, leaving him very upset. Also, when Carl met a waitress in an arcade, he clearly showed a fondness towards her, implying that he may be adulterous (or at least, disloyal), as he was already dating Jules.

Carl was shown to be the boyfriend of Jules Khatchadorian. Despite his relationship with Jules, Carl despises her children Rafe and Georgia and their pet dog Calvin, believing that he is the only one who would and should make Jules happy. He gets really angry when they call him by the nickname they gave him, from which point on he was known by them as Bear. Rafe and Georgia even tried to explain to Jules how much of a jerk that Carl really is, only for her to brush it off, much to their dismay.

During dinner at a restaurant, Carl proposed to Jules and she accepts, much to Rafe and Georgia's dismay. Having no idea how Rafe feels about the engagement, Jules starts worrying about him. Carl then manipulates Jules by stating Rafe is messed up and soft and that he should see someone to help him. Carl then offers to research on some therapists, but when Jules exits the room, Carl starts researching some military schools. After Rafe got expelled from Hills Village Middle School for his pranks against the tyrannical principal Ken Dwight, Carl found a boarding school with some military aspects and Jules decides Rafe should be shipped there to straighten up his behavior, which leaves as the settled decision since there is nothing else left to do.

However, Rafe's classmates soon learned that Rafe's expulsion was nothing but a ruse to cover Dwight and Ida Stricker's crimes of banning the remedial class from taking the B.L.A.A.R. test to receive a bonus from the school district, so they team up with Rafe to expose Dwight and Stricker's crimes to Superintendent Hwang. To that end, Rafe gets Georgia to take Carl's car on a joyride as part of the plan. Upon seeing that her kids and the car are missing, Jules is purely outraged to hear that Carl cares more about his lost car rather than her kids. Realizing now that her kids were right about Carl being a self-centered jerk that he really is, Jules furiously storms off to search for her kids alone, much to Carl's confusion.

Eventually, Carl soon finds out that his car was partially damaged just as Jules learns that Rafe will be re-enrolled back into the school after Hwang fired both Dwight and Stricker for their crimes. Despite this turn of events, Carl angrily swears to punish both Rafe and Georgia for ruining his car, but Jules foils this by returning the expensive proposal ring to Carl to pay for the damages, telling him that their relationship is over as she has had enough of his behavior towards her children. Humiliated and enraged by this, Carl lashes out at Jules for being so soft towards her children and not being able to handle being with him before leaving with his car in a huff. 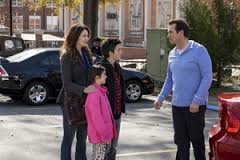 Carl lashing at Jules.
Add a photo to this gallery

Retrieved from "https://villains.fandom.com/wiki/Carl_(Middle_School:_The_Worst_Years_of_My_Life)?oldid=3787647"
Community content is available under CC-BY-SA unless otherwise noted.