Carl is a one-time villain from the FOX animated sitcom The Cleveland Show, only appearing in the episode "Pins, Spins, and Fins". He is an employee at Gutterball Bowling. He gets high off of shoe disinfectant spray, and hallucinates a bowling ball telling him to do evil things, acting as though they're good. Carl's obedience of the bowling ball has brought him to committing acts of pedophilia, theft, arson, and the abuse (and possible murder) of senior citizens.

Before his official debut, Carl made a silent cameo in "All You Can Eat", working the ticket booth at the arcade in the mall.

In "Pins, Spins, & Fins", Rallo and Donna were going bowling at the Gutterball Bowling Alley. Donna wanted to make bowling a fair game for Rallo, so she went up to Carl and asked him if he "had little kid balls". Shocked, Carl asked "Who told you!?", before realizing what she really meant and poorly tried hiding what he said. He told her where the kid's bowling balls were and even gave her the option of using bumpers, so that Rallo would never bowl a gutter ball. Donna thanked him and went off. Carl then inhaled some disinfectant spray, which got him to hallucinate the display bowling ball next to him, as a living, talking being.

The bowling ball told him that because he helped a kid out, he deserves to take $100 from the cash register, which he did. Later on, Donna winked at him, when Rallo won the game. The bowling ball told him that her winking was a way of signaling him to burn down the senior center. Another day at the bowling alley, Carl was seen walking by with a bunch of dynamite, a trigger, and a tank of gasoline. He planned on using this either to burn down the senior center, as mentioned before, or to enact another twisted action.

Carl is a Caucasian adult male with long, wavy, shoulder-length brown hair. He wears a pinkish red shirt with a tie on it that looks like the American flag.

Carl is an otherwise normal guy, whose reasons for being evil come from his drug addiction and his faith in following his drug-enduced hallucinations.

The hallucination of a talking bowling ball. 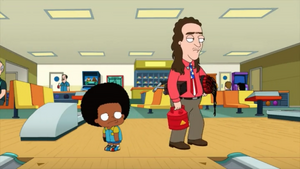