Torturing his victims and leading them to suicide.

Carl Anderson, also known as The Torturer, is one of the nine Metro City serial killers from 2005 survival horror game for Xbox 360 and PC, Condemned: Criminal Origins. The main protagonist of the game, FBI agent Ethan Thomas, never meets Carl in person, but has been investigating his case for a long time. His Modus Operandi is the cruelest among all serial killers terrorizing Metro City - he abducts his victims, tortures them through mutilating their bodies in horrible ways and releases them into the hallways of the abandoned St. Joseph's Secondary School for the Severely Troubled - his former school and current hideout. Carl continues to torment his victims by stalking them and not letting them escape from his lair until their sanity shatters, thus bringing them to committing suicide, which still counts as a murder. During the events of the game, Carl becomes a next target of the Serial Killer X Leland Vanhorn.

Little is known about his personal life. At the young age Carl was admitted to St. Joseph's Secondary School located in Metro City. The school has been established to educate and possibly house mentally ill people. It is unknown whether his relatives sent him to school, or he was an orphan. He later got occupied at the same school as a janitor. At the age of 17, he talks about his sadistic desires with PE teacher Samuel Tibbits under mysterious circumstances. After his school gets closed down and abandoned, Carl turns it into his "lair". After Carl's 8 years of criminal activity, Serial Killer X finally hunts him down while he pursues his last victim - Samuel Tibbits, who he possibly chose due to him revealing Carl's secret to the authorities. Leland Vanhorn (SKX) knocks him out unconscious moments before he discovers Tibbits hiding in a school locker. Leland then proceeds to mutilate his body and releases him into his own hideout - Apple Seed Orchard, in order to torture Carl more. Carl, led to the brink of death by Leland, impales himself with the fire poker that he possibly used for defense against SKX. His dead body will be later found and investigated by Ethan Thomas.

Judging by the fact that he was admitted to the St. Joseph's school for the Severely Troubled, Carl was a mentally disturbed youngster with violent tendencies.

He shows no comprehension of how atrocious his acts were, being clueless as to why  Leland is torturing him. It reveals him as an ultimate hypocrite, also making him seem pretty naive and even psychopathic, given the fact that he was okay with inflicting suffering upon others without any empathy or remorse. Same can be said about the fact that he described his twisted fantasies to his PE teacher Samuel Tibbits, which could potentially sabotage Carl's goals. Carl later paid Samuel back for revealing his secret by making him his last victim.

Carl is possibly a skilled stalker and has enough strength and weapon proficiency to grotesquely harm people of different sexes and ages, nevertheless he loses to Leland Vanhorn after being kidnapped, beaten and tortured by him. His hideout being the abandoned school implies he was most likely living in poverty.

Carl is suicidal as well, having enough will and courage to impale himself on a fire poker after not being able to endure the pain of Leland Vanhorn's torture. 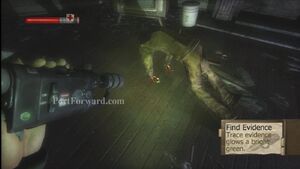 While Rosa is searching for some information about The Torturer, we can see his photo on the monitor. 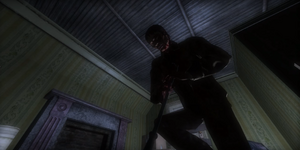 The Torturer moments before killing himself.

Newspaper article about The Torturer.
Add a photo to this gallery
Retrieved from "https://villains.fandom.com/wiki/Carl_Anderson?oldid=3895424"
Community content is available under CC-BY-SA unless otherwise noted.