Obtain four million dollars in a computer only his best friend Sam Wheat has the password to and open it so he can launder money for the drug dealers (almost succeeded).

Hire Willy Lopez to steal Sam's wallet that has his password to open the 4 million dollar account (succeeded).
Steal Molly Jensen away from Sam Wheat to be with him.
Kill Oda Mae Brown in order to prevent Sam Wheat from saving Molly and vindicating the money (both failed).

Carlos "Carl" Bruner is the main antagonist of the 1990 film Ghost. He is an accountant of a bank and Sam Wheat’s former best friend turned arch-nemesis.

He was portrayed by Tony Goldwyn, who also played Dean Sanderson in The Mechanic, Michael Drucker in The 6th Day, the Gentleman Caller in Kiss the Girls, Colonel Bagley in The Last Samurai, and Samuel Braithwhite in Lovecraft Country.

Carl was a good friend and colleague of a banker named Sam Wheat, until Sam discovered discrepancies in some of the bank accounts, which were the result of laundered money run by Carl on behalf of drug dealers. In order to steal Sam's security codes, Carl hired a lowlife criminal Willy Lopez to rob Sam, though this results in Willy panicking and killing Sam with a gunshot, much to Carl's anger as he only wanted Sam's wallet, not Sam dead. Carl sneaks into Molly's apartment and steals the codes once Willy fails in doing so. He plans to use them to access four million dollars from a laundered account and pay back his superiors. Upon realizing that Carl had a hand in his death, Sam (now a ghost) is now completely furious at Carl for his treachery, declaring he had a life.

Later, Carl himself begins to panic when he cannot access the fake bank account which is now closed. He learns that Oda Mae closed the account and declares that if the money is not returned, he will kill Sam's girlfriend, Molly. Sam catches both Carl and Willy trying to break into Oda Mae's apartment. Sam then physically attacks Willy, who attempts to escape from Sam but is killed in a traffic accident. Willy's ghost arises, only to be grabbed by a group of howling demons and pulled into Hell for his sins. Upon witnessing Willy's death, Carl flees from the scene.

Close to the end, Carl arrives back to Molly's apartment, but they flee. Sam is left momentarily weakened by having possessed Oda Mae in order to use her body to physically connect with Molly, leaving Molly and Oda Mae to fend for themselves against Carl. After evading him for a brief time, he seizes Ode Mae and threatens her at gunpoint for the money. Molly comes to Oda Mae's rescue and is knocked aside just as a fully recovered Sam arrives to help them by physically attacking Carl. Terror-stricken, Carl attempts to flee through a nearby window, but not before flinging a scaffolding hook in Sam's direction. The hook swings back and partially shatters the glass in the upper part of the window, which plummets down on Carl as he is climbing through, fatally impaling him through the chest. Carl becomes a ghost himself much to his astonishment and to Sam's grief. Sam then watches in silence as the shadowy demons arrive and drag a screaming Carl away to Hell for his sins.

Though he was initially Sam and Molly's good friend, Carl Bruner was a conniving and self-serving coward at heart. After Sam was killed, he was more concerned with saving his own skin (especially when it came to making sure that his money laundering scheme went smoothly, as the drug dealers he was working for would kill him if things went bad) than mourning his friend, which caused him to become increasingly unhinged as time went on.

As a further sign of how heartless and treacherous Carl was, he even tried to seduce Molly while she was still mourning Sam, deliberately spilling coffee on his shirt so he could have an excuse to take it off while he was alone in a room with her. He was also prepared to kill Molly and Oda Mae in order to further his plans, though this may have been out of desperation.

Despite his treachery, it is hinted that Carl still may have cared about Sam to a degree, given that after his death, when he saw Sam as a ghost, he smiled as if he was happy to see him. Unfortunately, in the end, he cared more about himself than anyone else, and his misdeeds are what led to his spirit ultimately being taken to Hell after his death. 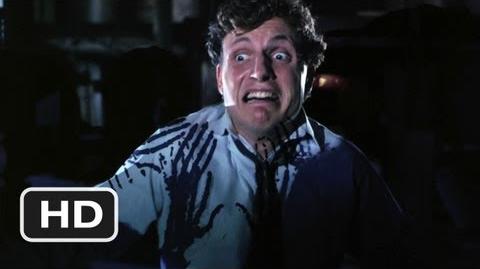