Owner of a youth center (formerly)

Get away with his crimes (failed).

Carl Buford (later changed name to Mohammed Alam) is the main antagonist of the Criminal Minds episode "Profiler Profiled", and a supporting antagonist in the later episode "Restoration". He is a pedophile and serial killer of young boys who frames FBI agent Derek Morgan, one of his former victims, for his crimes.

He was portrayed by Julius Tennon.

Buford worked at the Upward Youth Center in Chicago, Illinois, which earned him several awards due to his work with underprivileged children. Behind his friendly, altruistic demeanor, however, he was a pedophile who molested over 50 young boys, one of them being future Behavioral Analysis Unit (BAU) agent Derek Morgan. Like his other victims, Morgan would keep the abuse a secret for years afterward.

Buford kills a third boy named Damien Walters in 2006. Buford's close friend Detective Stan Gordinski, who had been antagonizing Morgan for years after arresting him during a brawl, arrests Morgan again, this time on suspicion of all three murders. Morgan's colleagues at the BAU rush to his side to prove his innocence. Morgan manages to escape police custody and, after talking with Buford's latest victim, goes to the center to confront him.

Morgan calls Buford out for the abuse he inflicted on him so many other children, but Buford tries to manipulate him into believing his memories of the abuse are not real; when that doesn't work, he says that the statute of limitations ran out too long ago for him to be criminally charged. He even blames Morgan for his actions, telling him that "you could have said no." Buford's luck finally runs out, however, when Gordinski arrives at the center just in time to hear him tacitly admitting to murder and years of child molestation, and puts him under arrest. Buford begs Morgan to help him, but Morgan simply replies, "You go to hell." Buford is found guilty of murder and sentenced to life in prison.

Six years later, Buford has converted to Islam and changed his name to Mohammed Alam. Because the statute of limitations for his sexual offenses had run out by the time he was arrested, he was only never charged with them, which keeps him safe from his fellow inmates.

When four-middle aged men are murdered with the phrase "Look up to the sky" left behind in at least two of the crime scenes, Morgan recognizes the phrase as something Buford said while abusing him. Believing the killer is one of Buford's former victims, Morgan reluctantly goes to visit him in prison. Morgan asks Buford for a list of his victims, threatening to out him to the other inmates as a child molester if he refuses. Buford gives him a list, but uses the opportunity to open Morgan's old wounds by telling him he was "always special".

The killer is identified as Buford's former victim Rodney Harris, whom Buford had left off the list. Buford and other inmates watch the news conference on the case, in which Morgan tells reporters that Buford had sexually abused Harris and several other boys, including him. Another inmate recognizes Buford's former name, and confronts him about what he did; Buford denies it, saying that he "loved" Morgan. The other inmates do not believe him, however, and later gang up on him and kill him. Upon hearing the news of Buford's death, Morgan looks out at the sky in his apartment, having finally found closure. 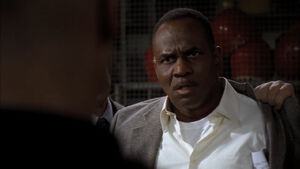