Carl Fogarty is the main antagonist in the film adaptation of the graphic novel A History of Violence. In the graphic novel, his name is Torrino. Carl is portrayed as a ruthless mobster from Philadelphia with a scarred face and a glass eye.

He was portrayed by Ed Harris - who also portrayed Blair Sullivan in Just Cause, General Hummel in The Rock, Mitch Wilkinson in National Treasure: Book of Secrets, The Man in Black in Westworld, Leonard Dekkom in Geostorm, Wilford in Snowpiercer, and Christof in The Truman Show - in the film adaptation.

In the film, after protagonist Tom Stall kills two criminals who tried to rob his diner, he becomes a local hero and is featured on the local news. This attracts Carl's attention, and he travels to the small town of Millbrook, Indiana, where Tom lives with his wife Edie and his children, Jack and Sarah.

Carl shows up at Tom's diner with two henchmen, claiming Tom's actual name is Joey Cusack and that he's from Philadelphia. Tom replies that Carl has confused him with soneone else, but Carl keeps goading him, making a veiled threat before he leaves. Edie calls the local sheriff Sam Carney, who advises Fogarty to leave town, and later informs the Stall family that the man in question is a mobster from the East Coast, who spent 15 years in prison on several charges of murder, assault and disappearances.

A few days later, he finds Edie in a shopping mall, and tells her that her husband is in fact a former mobster who has killed dozens of people, and who stabbed him in the eye. He dares her to ask "Tom" about it, and she warns him that she'll get for a restraining order against him if he doesn't leave her family alone.

One afternoon, as Tom chastises Jack for beating a bully up at school, Carl - accompanied by his two accomplices - shows up at his house demanding that he comes along with them. When Tom refuses, Fogarty uses Jack -who had walked away after the argument- as a hostage in exchange for his father. At first it seems to work, so they return Jack to his house, but Tom still doesn't want to go, so Carl asks his henchmen to force him to get in the car. Tom dispatches both of them, but Fogarty manages to shoot him in the shoulder, flooring him. He closes in and asks Tom if he has anything to say before he kills him; it is at this moment when Tom reveals that he is in fact Joey Cusack when he tells Carl he should have killed him back in Philadelphia; a smirking Carl replies, "Yeah, Joey, you should have". Just as he is about to kill Tom/Joey, however, Jack shoots him in the back with his father's shotgun, killing him. 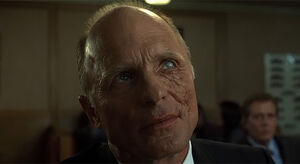 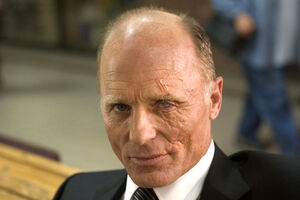 Add a photo to this gallery
Retrieved from "https://villains.fandom.com/wiki/Carl_Fogarty?oldid=3760114"
Community content is available under CC-BY-SA unless otherwise noted.