Kill Jack Napier as revenge for his affair with Alicia Hunt (both failed).

Carl Grissom is the overarching antagonist in the 1989 film Batman, the first installment of the Burton/Schumacher Batman film quadrilogy.

He was Gotham City's most powerful crime lord until he was betrayed and killed by his second-in-command Jack Napier, who survived an assassination attempt arranged by his boss and is now surfacing as the infamous supervillain Joker.

He was portrayed by the late Jack Palance, who also played Yves Perret In Tango & Cash, Rothbart in The Swan Princess, and Voltan in Hawk the Slayer.

Carl Grissom used to be the most powerful crime lord in Gotham City, as he got some or even most officers of the Gotham City Police Department (except Commissioner Gordon) on his payroll, including Lieutenant Max Eckhardt. When the recently-elected District Attorney Harvey Dent begins to make connections between Grissom and Axis Chemicals, Grissom panics, knowing that the evidence stored at the factory is enough to have him executed.

Grissom also finds out from Eckhardt that his mistress Alicia Hunt has been having an affair with Napier. So to take his revenge, Grissom sends Napier and his crew to Axis Chemicals to seize the evidence before Dent can. At the same time, he calls Lt. Eckhardt and orders him to lead a team of police officers to kill Napier. However, the plan goes wrong when Commissioner Gordon intervenes to take Napier in alive. Eckhardt then attempts to escape, but is shot in the chest and killed by a vengeful Napier. Napier is then confronted by Batman, but falls into a vat of chemicals, leaving Grissom to believe that Jack is dead, much to his delight.

The next day in the night, after a shower, Grissom has a visit from Napier, who survived the fall in the vat of chemicals and now wants revenge for setting him up. Grissom feigns relief in an attempt to grab his gun, but Napier scoffs him and plays wise to Grissom's moves by holding the crime lord at gunpoint. Grissom then pleads for his life by offering to cut a new deal with Napier, but Napier refuses and instead reveals his new identity as the Joker, with green hair, white skin, and a widened, permanent grin with red lips, much to Grissom's horror. At that point, the Joker shoots Grissom to his death and takes over his crime empire.

After Grissom died and his body was disposed of, the Joker told Grissom's associates that Grissom was in hiding and that he was standing in for him. Mobster Antoine Rotelli is electrocuted to death by the Joker for refusing to cooperate while mobster Vinnie Ricorso presents false documents to the city government that Grissom handed over all his properties. Ricorso is then executed by the Joker, who makes his first public appearance. As for Alicia, she would be tortured to insanity by the Joker since the Joker was enraged that Grissom only punished him and not her for the affair causing Alicia to die. The Joker uses Grissom's factory Axis Chemicals to manufacture toxins that cost lives until Batman and Vicki Vale informed the G.C.P.D. about the lethal combinations that the Joker was using. Grissom's death would finally be avenged when Batman allows the Joker to fall to his death from the top of the Gotham Cathedral when Joker was trying to make moves on Vicki due to wanting nothing to do with Alicia anymore. Grissom's actions led to the rise of lunacy in the criminal underworld which led to theatric criminals rising such as the Penguin, Catwoman, and Red Triangle Circus Gang. Max Shreck, a corrupt member of Gotham's elite, would try to take advantage of this lunacy by turning Selina Kyle, his secretary, into Catwoman after trying to kill her and in manipulating Penguin to running for mayor by terrorizing Gotham to approve of a power plant that Shreck planned to construct in order to drain Gotham of it's electrical power.

According to the novelization, Carl Grissom enjoyed the finer things in life such as Alicia and his penthouse. Grissom had no remorse for his murderous actions, but was willing to manipulate others for his own ends. For instance, when Grissom learned that Napier and Alicia were having an affair, Grissom sent Napier to Axis Chemicals to get assassinated by the G.C.P.D. and Napier only went to Axis Chemicals to retrieve documents from Grissom that would've had him executed if District Attorney Dent were to seize them. Grissom at first had guilt in setting Napier up, but decided otherwise since he knew he had to draw the line while reshuffling the entire organization. When Napier resurfaced to get revenge on Grissom, Grissom tried to manipulate Napier again by feigning relief and tried to bargain for his life only for the Joker to play wise to Grissom's motives.

Despite Grissom being a murderous gangster, he truly did love Alicia and would never have tortured her to insanity similar to what Napier did when Napier became the Joker. Prior to his transformation as the Joker, Napier was rude to Alicia while Grissom was always polite to her. Grissom was only motivated to set Napier up because of his affair with Alicia, Grissom was unaware that Napier was planning to kill him to take control of the organization. 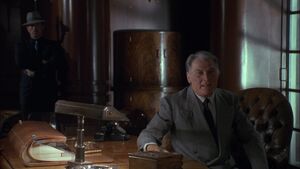 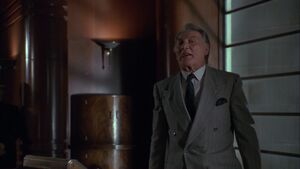 Grissom fearing he will be executed if the authorities recovers evidence of his empire's connections to Axis Chemicals. 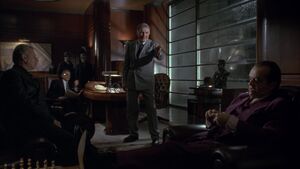 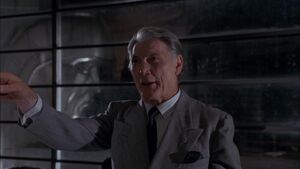 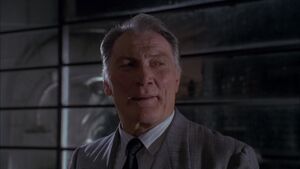 Grissom eyeing at Alicia and watching Jack's reaction, having discovered their affair. 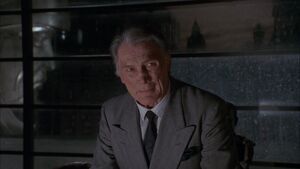 Grissom hearing Jack wanting to back out on the assignment. 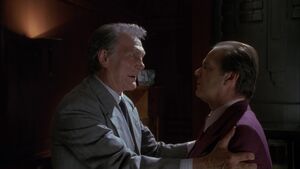 Grissom convincing Jack to do the assignment he tasked him to do. 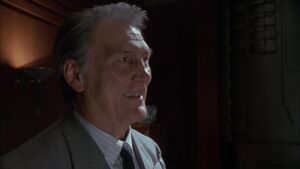 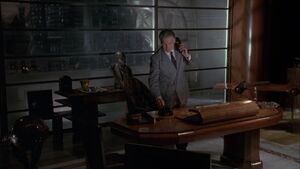 Grissom at his desk about to make a phone call. 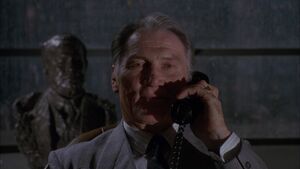 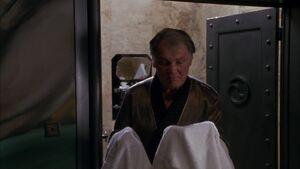 Grissom after taking a shower. 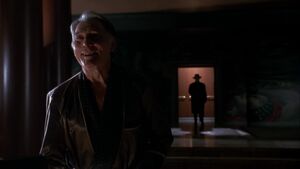 "Is that you, sugar bumps?" 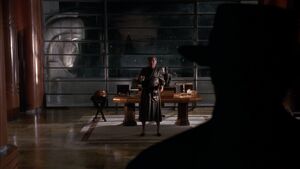 When Jack reveals himself to be alive, Grissom feigns relief, but Jack does not buy it. 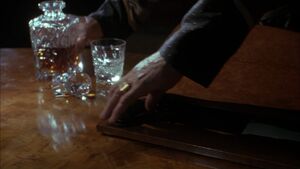 Grissom trying to get his gun, only for Jack to stop him, holding him at gunpoint. 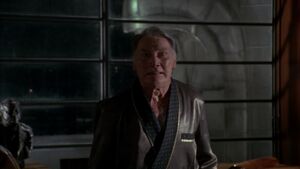 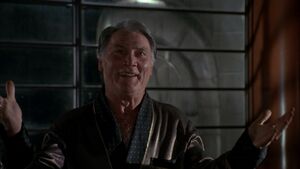 When Jack threatens him, Grissom tries cutting a deal with him. 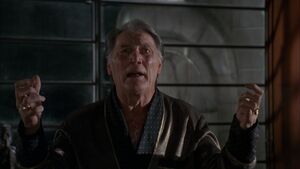 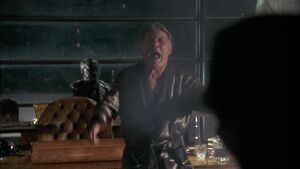 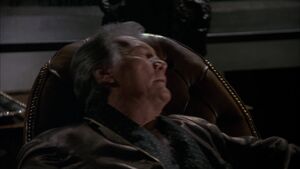