Running the German Garrison in Paris.

Prevent anything that will break the German occupation of Paris, as well as France.
Kill Rousseau.
Destroy the French Resistance (all failed).

SS-und Polizeifuhrer Carl Heinrich is the secondary antagonist of the 2017 video game Call Of Duty: WWII. He is the leader of the SS-Nazi Police force, head of Nazi garrison in Paris and the man responsible for the murder of Rousseau's family.

He was voiced by J. Paul Boehmer in motion capture.

Carl Heinrich was born in Germany as a the middle child of a cultured wealthy family, and suffered from polio at a young age. His mother refused to coddle him, and instead believed that he would overcome polio by being tough while he was being bullied by his classmates for his limp. Though he overcame his disability, the abuse he suffered from caused him to have a ruthless drive and lack of empathy for others. When his classmates spread rumors that his grandmother was Jewish, Heinrich was angered and started to hate the Jewish community, thus leading him to join the Freikorps.

After Germany lost the Great War, Heinrich's family lost their wealth and he joined the army to get recognition and a title for himself. Scheming his way to the top, Heinrich was still ridiculed his colleagues for his cultured mannerism, but he joined the Nazi Party and was recognized by Himmler. Tasked with creating the SS Intelligence Service, Heinrich became known for his brutality and ruthless behavior. He would murder the family of Camille Denis, which resulted in her leading the French resistance and wanting to get revenge on the general. After suffering from a scandal, Heinrich was transferred to Paris where he captured resistance fighters and looked through files on individuals.

In the game, Heinrich is mentioned to have discovered that resistance operative "Rousseau" is really Camille Denis and been unable to catch her, resulting in Heinrich executing her parents and husband, purging the resistance and sadistically killing her son.

In the game, Heinrich only appears on the mission "Liberation", where Rousseau goes to blow up the gates in order to create a diversion for the Americans to attack the Germans. She has to steal Heinrich's briefcase, causing her to impersonate Greda Schneider, a German agent sent to give Heinrich his travel papers (who was killed by privates Ronald Daniels and Robert Zussman in the previous level). When Rousseau enters the office, she finds a document stating that explosives have gone missing from the store (having been stolen by Rousseau's contact Karl Fischer for use in the plan) and that Fischer and Oberst Walter Gerber are suspected.

Heinrich then enters and asks Rousseau what she's doing. Her cover story appears to work and Heinrich proceeds to further interrogate Rousseau on her story before monologuing about how he loves gouging out birds eyes and drowning them. He then reveals that he knows she's Rousseau by telling her that "Watching your son flail as drowned under my boot gave me the greatest pleasure of all" and violently choking Rousseau. Fortunately, she manages to smash a wine glass that she dropped and stab Heinrich to death before stealing his briefcase and escaping through the window.

Heinrich was a sadistic and calculating person, scheming through the ranks of the Nazi Party despite being taunted by elite members. When restraining Rousseau, he gloats about his enjoyment of killing her son, stating it gave him the "greatest pleasure". In addition, Heinrich was intelligent and deductive, being able to tell it was Rousseau by interrogating her, and noticing that she looked serious. 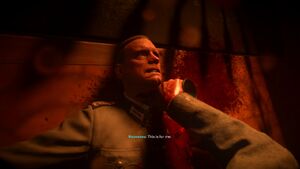 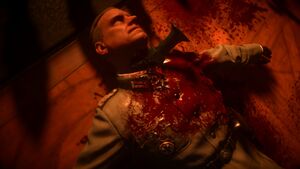