Mister Driver (by Ryder)
Mr. Right (by Ryder)
Playboy (by a GSF gang member)
Romeo (by Denise)
Carlito (by Catalina)
Mr. C-to-the-Jay (by Jizzy B.)
Benny (by Millie, mistakenly)

Avenge the death of his mother.

Destroy the Drug market and the Loco Syndicate.
Free his brother Sweet from prison.
Hunt down and kill Big Smoke and Ryder for their betrayal.
Kill Frank Tenpenny and Eddie Pulaski.
Destroy the CRASH (all succeeded).
Kill anyone who gets in his way (mostly succeeded).

He was voiced by the rapper Young Maylay, who sings the 1972 title song for the Grand Theft Auto game title and who is the cousin of Franklin's voice actor Shawn Fonteno.

Carl Johnson is a pragmatic and quite charismatic gang leader (though his charisma can be enhanced throughout the game). He can be extremely violent, ruthless and destructive when necessary. He manages his problems in a boss-like fashion, which often involves brutal shootings. That being said, most of his victims also tried to murder CJ as well. He has no problems hunting down or wiping out anyone that gets in his way - especially Ballas or cops, or committing petty crimes such as robbing houses and various places. The only characters he genuinely fears are those in a position of authority such as Frank Tenpenny, or utter psychopaths such as Catalina.

On the other hand, unlike his two predecessors (who were hardened criminals with no remorse), Carl Johnson displays much more decency and empathy. He is overprotective of his gang and his brother Sweet. He also displayed regrets immediately after defeating Big Smoke, despite the fact that Big Smoke coldly betrayed him and left him for dead somewhere in the countryside.

Some even question his intelligence, though Carl Johnson proved many times to be a skilled manager and strategist. Carl even uses manipulation and deception in order to gain what he wants, an example is when he successfully tricked Millie into giving him the access key necessary to organize the raid of the Caligula.

Unlike Ryder and Big Smoke, Carl Johnson is not interested in drugs and actually despises them. This is shown multiple times throughout the game, such as when he beat a crackhead attempting to give Sweet some PCP. Despite this, however, CJ seems to get along pretty well with the Truth, who is a drug-addict and dealer. He also holds a grudge against the C.R.A.S.H. - especially Tenpenny - and the cops in general, often nicknaming them "bribe-taking assholes" or "bitches".

Carl Johnson was born in the crime ridden Los Santos suburb of Ganton. He had three siblings, Sean "Sweet", Kendl and Brian. At some point, his father left the family. At some point Sweet, CJ and Brian befriended Lance 'Ryder' Wilson and Melvin 'Big Smoke' Harris and joined the gang known as the Grove Street Families. 2 decades later in the late 1980s, Brian was killed and Carl was blamed for his death. After that, he moved to Liberty City, doing petty crimes with Joey Leone until 1992, when his mother Beverly was killed in a drive-by shooting.

After arriving in Los Santos, Carl was kidnapped by members of the CRASH police force and was framed for the murder of officer Ralph Pendlebury. He returned to Grove Street and began to work for the Grove Street Families again, slowly regaining respect from his resentful brother and his other friends.

At one point, a concerned Sweet asks Carl to follow Kendl and find her love interest, who turns out to be Cesar Vialpando, a leader of the Varrios Los Aztecas. Although initially hostile, the two men eventually befriend each other, and would later work in their common interests against the narcotic infestation spawned by the Ballas and Vagos.

Betrayed by Big Smoke and Ryder and move to San Fierro

While on a mission to weaken the Ballas, Carl is contacted by Cesar to meet him at an area not far from a Ballas drug hideout in order to give more information on the drive-by shooting. During the meetup, they spy on the hideout and CJ is horrified upon seeing Big Smoke and Ryder along with Frank Tenpenny, the leader of CRASH, as well as Ballas gangsters. Cesar reveals that C.R.A.S.H. ordered the drive-by with the intent of killing Sweet, and have been working with the Ballas, Big Smoke, and Ryder to wipe out the Families and profit off the drug trade.

Suspecting that Sweet is heading to a trap, Carl tells Cesar to help Kendl flee. He then helped the injured Sweet fight off the Ballas Gangsters. Soon, LSPD reinforcements arrive, and Sweet was arrested, while Carl was taken to Angel Pine by C.R.A.S.H.

During his time in the wilderness, Tenpenny had CJ to continue working for them, first by taking out a witness protected by the FBI. Smoke, Ryder and the Ballas unleashes a wave of drugs onto the city. He befriends an aging hippie with a marijuana farm named the Truth and works with him for a while. In a rural race, he wins the respect of triad leader Wu Zi Mu. He also forms a partnership with Cesar's deranged cousin, Catalina and robs "soft targets" with her until she decides to ditch him for Claude. Carl wins a run-down San Fierro garage from Claude in another badlands race. When Tenpenny betrays The Truth and sends his henchmen on his weed farm, Carl helps The Truth to destroy all the crops and the pursing police helicopter before heading to San Fierro. He recruits helpers from The Truth to use the garage as a front for his machinations.

Carl begins working for Woozie in return for their assistance on the matter, and along with Cesar they identified members of the Loco Syndicate - Jizzy, Ryder, Mike Toreno and T-Bone Mendez. Infiltrating the organization, Carl eventually kills all four, though he is somewhat remorseful of Ryder's death.

Mike Toreno, who reveals his survival via a decoy, demands Carl to work for him in exchange to secure Sweet's release. To this end Carl took on perilous missions for him, purchased an aircraft graveyard and trained himself in aviation.

Later, Carl ventures to Las Venturas where he continues to run errands for Woozie and the Four Dragons Casino. He also assists in planning their heist on the Caliguila Casino jointly ran by three mafia families - the Leones, Sindaccos and Forellis. Using his previous connection with Joey Leone and distrust between the three syndicates, Carl gains the favor of don Salvatore Leone. He kills a hit squad targeting Salvatore, and later devastates the Forellis back at Liberty City while also helping Paul, Maccer and Ken Rosenberg to escape Salvatore's clutches.

Eventually, the triads and Carl perform a daring heist on the casino. After also saving disgraced Rapper Madd Dogg, whose career he helped to ruin, Carl agrees to become his manager.

After Carl returned to Los Santos, he helped Madd Dogg reclaim a mansion from the Vagos, then took on a final job for Toreno to steal a fighter jet and eliminate espionage ships, who in exchange had Sweet released from prison. Unable to convince his brother of his expansions around San Fierro and Las Venturas, he agrees to aid Sweet instead. He also helps Madd Dogg in reclaiming his career from OG Loc. When Tenpenny was announced innocent, riots began all over San Andreas. Carl then takes control over most of the streets of Los Santos with Sweet and helps Cesar as well. Eventually, they learn of Smoke's address and decide to exact their revenge. After telling Sweet to remain on the vehicle, Carl fights through Smoke's minions and eventually kills him.

Right after Smoke's death, Tenpenny appeared and reveals his malicious intentions, threatening Carl to hand him Smoke's drug money. Carl survives Tenpenny's attempt on his life by faking Sweet's presence, and subsequently escapes the burning crack den. Sweet hangs onto Tenpenny's fire truck as the latter attempts to flee Los Santos, forcing Carl to give pursuit. Retrieving his brother, Carl rides shotgun and kills hostile reinforcements while Sweet continues the chase. Eventually, Tenpenny loses control on the Ganton overpass and crashes, dying of his wounds. After everything is over, Carl and his friends celebrate in his house.

When Kendl asks Carl where he's going, he responds "Just going to hang out in the streets". He then gets a call from Catalina while having sex with Claude, much to his disgust.

Though Carl is one of the less ruthless protagonists (when compared to the likes of Claude, Trevor or Tommy), he still has villainous qualities, having connections with various gangs and syndicates such as the GSF, Triads and even Mike Toreno's clandestine operations, not to mention the optional crimes committed in free roam by the player.

All of these crimes are non-canon and only up to the player choice:

Just like Big Smoke, Carl has also appeared in the Internet-online memes. Carl's quote and scene from the beginning of the game, have been over-used as memes. The meme started to spread as a wildfire since 2019, when the famous YouTuber by the name FlyingKitty, released his parody-video about the quote, which gained three million views, making the meme blow up much more. 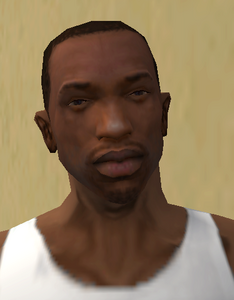 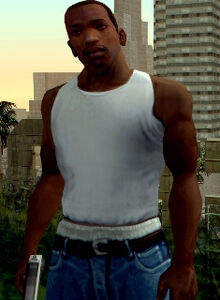