My Gym Partner's a Monkey

Natural Enemy
Carl Mongoose is a one-time villain from My Gym Partner's a Monkey, only appearing in "Mongoosed". He was the former friend of Slips Python, before hearing their species were natural enemies, putting them at war with each other. He is voiced by Tom Kenny.

In "Mongoosed", Carl and Slips originally started off as friends, who played tag and laughed at jokes together. One day in health class, they learned about natural enemies among animal species. One of which was the tree python and the mongoose, which happened to be their own species. Carl and Slips instantly started hating each other and completely forgot everything about their previously established friendship and now being hell bent on taking each other down.

Slips and Carl would fight back and forth with a series of Loony-Tunes style traps and pranks. Every one of them would fail to hit their target and blow up in Adam's face instead. First, Carl sent a Skunk-O-Gram to Slips at lunch, but Adam opened it instead, getting himself sprayed. Slips then stuffed Carl's locker with logs and coconuts, but Adam swung by and knocked Carl out of the way as he opened it. Carl then tampered with the vending machine, sending cans of swamp monster at Adam, instead of Slips.

Adam had finally had enough, so he kidnapped Slips and Carl, tied them up and forced them to make up. They both refused once more, saying that it went against their natural instincts. Just then, Principal Pixiefrog came in and announced that Carl was getting transferred to a private school, because his rich parents wanted to show off their moolah. When Carl realized he'd be leaving Slips forever, they suddenly burst into tears and became friends again, saying they'd miss each other deeply, now that they wouldn't be seeing each other again.

Carl left Charles Darwin Middle School and was never seen or heard from again, but his relationship with Slips had a happy ending, with the two of them leaving things off as the being the best of bros.

Carl is a brown, furry mongoose with big, puffy, curly, messy blond hair. He has thick-rimmed black round glasses. He wears a blue shirt with a lighter blue collar and sleeves, and no pants.

Carl is much like Slips Python. They are both laid back, jovical, and rather dim-witted. He enjoys rough housing, insulting people, and laughing at jokes that aren't funny. He comes from a wealthy family, though he doesn't exhibit any of the hoity-toity traits of his parents. When it comes to war, Carl is pretty incompetent, only attacking people with childish pranks and booby traps. He is, however, rather experienced with technology, proving the ability to hack a vending machine and repurpose it as a cannon, which he was able to operate with a remote control, sitting from a far distance away. 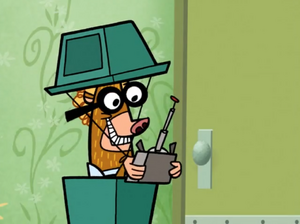 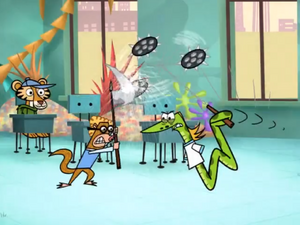 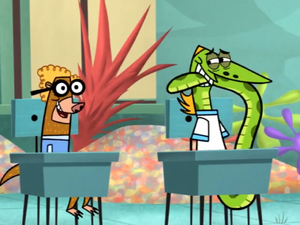 Carl and Slips being friends.
Add a photo to this gallery
Retrieved from "https://villains.fandom.com/wiki/Carl_Mongoose?oldid=3458868"
Community content is available under CC-BY-SA unless otherwise noted.