Carl Nesmith, also known as Captain Nemesis and later known as Overlord, is an antagonist in Ben 10: Ultimate Alien, and Ben 10: Omniverse. He is a former superhero who became a supervillain who tries to destroy Ben Tennyson so he can became famous again.

Carl Nesmith, despite being a superhero in his prime, is extremely arrogant, uncaring and self-absorbed. Unlike most superheros, he cares little about actually saving and helping people and only seeks to receive attention and fame even at the cost of others, specifically Ben Tennyson. Despite this, Captain Nemesis chose to portray Ben Tennyson as being misguided instead of a delinquent when his assistant labelled him as such.

Carl Nesmith is a superhero even before Ben 10. He uses his technology to build himself a supersuit to counter his enemies. However, he is revealed to be a fraud as he stage up incidents to get fame for his heroic actions. Some implied that he was a true hero in the past.

Captain Nemesis had second hero plan, He released Computron and his minions from Dimension 12, So he can defeated them and have the opportunity to prove that he is a better hero than Ben, Will Harangue was capture some the footage on film, but another news crew capture all as well, Ben Tennyson arrived as Jetray than transforms into Armodrillo and destroy Computron's Minions, and Captain Nemesis only destroy Computron leaving Ben who destroy most of the robots.

Nemesis attempts to be friendly toward Ben by challenging to a friendly hero comptition to prove who the better hero, but Nemesis was hiding his jealousy. The first challenge was about strength, Ben win the first challenge easily as Humungousaur by throwing a train further than Captain Nemesis. The second challenge was about speed, His men equipped jet boosters behind his armor, Ben selected Jetray, but instead he was transform into Rath, Nemesis win the second challenge, Rath got angry and attack Nemesis, Jennifer Nocturne ask Rath what he is doing, Rath than transform back into Ben and Ben say "Sorry Rath just get carry away sometime". Than there was tie breaker and the final round was a a tug-of-war that was held over a mud pit. Ben wins as Four Arms and Nemesis lost, Ben Tennyson was the winner of the hero comptition and Captain Nemesis was humiliated, but Ben as Four Arms respect and say that Nemesis put up a good fight, but Nemesis didn't appreciate Ben's kindness.

Later Captain Nemesis was jealous and rancorous toward Ben Tennyson and wanted revenge on him, Nemesis asks his men to remove the safeguards from his armor. One of his men was going to ware him about danger, but Nemesis didn't want to know about it and he says if he wants to defeat Ben Tennyson, he needs more power, His assistant Simons tells him not to do it, saying that this would be a mistake. Simons also says that working alongside with Captain Nemesis was the greatest honor of his life and begs him not to do it, but Nemesis refusea and yells at him to leave, upsetting Simons so much that he obeys his boss's orders and walks away. Nemesis tells his men to remove the safeguards of his armor. Nemesis kidnap Julie Yamamoto and Jennifer Nocturne, Ben Tennyson was in his car, He call Julie Yamamoto if want to go Mr. Smoothy with him, Nemesis answers Ben "come and get me" if he wants to see her again.

Ben Tennyson transform from Goop into Water Hazard (selected alien was Big Chill), Water Hazard shoot nice cold water at Nemesis' armor and his armor started to steam, then Water Hazard absorb the moisture from the air and cause Nemesis' armor to break making him powerless. Ben as Water Hazard was angry that Captain Nemesis was not a hero anymore so he defeated Nemesis by ruthlessly punching him several times, Water Hazard then transforms back into Ben, and Ben say to Nemesis that being hero isn't about fame, it about helping people. Captain Nemesis was then arrested by the police and was taken to prison for his actions, and his popularity was lost as well.

Carl Nesmith possesses no natural superpowers. Instead, he wears a battlesuit that he gains power from:

Carl Nesmith is useless without his armor. 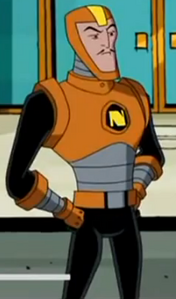 In the Omniverse flashbacks 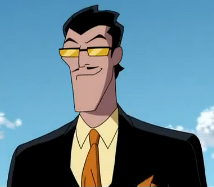 Without his armor on in Omniverse 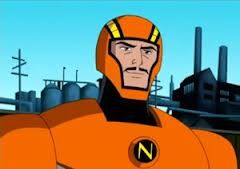 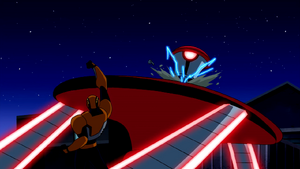