Get the money for Jerry Lundegaard by kidnapping his wife (failed to an extent).

Kill Wade Gustafson for refusing to hand over the money to his daughter (succeeded).
Get revenge on Shep Proudfoot for beating him under suspicision (failed).

Carl Showalter is one of the two main antagonists of the 1996 comedy crime-thriller film Fargo, the first installment of the Fargo universe that 18 years later would be continued by the TV series of the same name.

He was portrayed by Steve Buscemi, who also played Mr. Pink in Reservoir Dogs, Nucky Thompson in Boardwalk Empire, Garland Greene in Con Air, Randall Boggs in Disney/Pixar's Monsters Inc., Mr. Wesley in Disney's Home on the Range, Francis E. Francis in The Boss Baby, and Dwight Diddlehopper in The Simpsons episode "I Don't Wanna Know Why The Caged Bird Sings".

Showalter and his partner, Gaear Grimsrud, are two criminals who are hired by a Minneapolis, Minnesota car salesman named Jerry Lundegaard, to kidnap his wife, Jean, so he can use the ransom money to pay off the money he embezzled from the dealership he is employed at to cover his own debts, which are never clearly specified. Carl and Gaear travel to Minneapolis, Minnesota where they break into Lundegaard's home. Jean hides from them, but Gaear finds her and ties her up. They drive away, but a state trooper pulls them over outside Brainerd. Carl remembers that he forgot to put the temporary dealer plates on the vehicle, and attempts to bribe the trooper. When this fails, Jean squirms in the backseat and the trooper hears her. Gaear then grabs the trooper by the head, drags him into the car, pulls his gun from the glovebox, and shoots the trooper in the head, killing him. Grimsrud then calmly puts the pistol away and scoffs at Carl's "plan", telling him to get the trooper's body off the road. While Carl is doing so, two teenagers drive by and see this. They speed off, intending to tell the police, and Gaear pursues them, flicking his cigarette out the window. They lose control of their car and swerve off the road, and Gaear pulls over, shooting one in the back and the other in the head. They hide at a lakeside cabin, and Gaear eventually becomes annoyed with Jean, later beating her to death.

Eventually, Carl is beaten by a furious Shep Proudfoot (the man who told Jerry about Carl and Gaear and would later be interrogated by the police) for bringing him under suspicion. This enrages Carl and he angrily orders Jerry to deliver the ransom immediately. Gustafson (Jean's father) insists on making the money drop himself. At the drop point in a Minneapolis parking garage, he tells Carl he will not hand over the money without seeing Jean. Extremely furious, Carl shoots and kills Gustafson, but not before Gustafson shoots Carl in the jaw, Carl then repeatedly shoots Gustafson to dead. After fleeing the scene, Carl is astounded to discover that the briefcase contains $1 million. He removes $80,000 to split with Gaear, then buries the rest alongside the highway (it will later be found in the series by Stavros Milos).

When Carl arrives to the Cabin, he finds Jean's dead body and Gaear eating in front of the TV Carl says they must split up and leave the state immediately. Carl and Gaear get into a heated argument over who will keep the dealership car with Carl using his injury as justification, Carl exits the cabin enraged but Gaear follows him with an axe, Carl turns around just to get hit with the axe and killed, later Gaear tries to get rid of his body by putting it into a woodchipper but he is discovered by police officer Marge Gunderson (the police officer who was investigating the case) after she identifies the car, she then arrests Gaear.

Carl is a very talkative man and also someone who swears all the time, he is also shown to be short-tempered as well as Gaear, he gets very annoyed with Gaear's constant smoking and silence as he keeps talking about it, which also annoys Gaear. Despite his violence, he was still someone who tried to ensure the well-being of others. Instead of outright shooting the trooper, he attempted to bribe him without any harm.

Because of his short-temper and lack of common sense, Carl is easily the least effective of him and Gaear. An example of this is when shoots Wade rather than simply tell him where Jean is because of the latter's rude behavior. This makes him less ruthless but also less professional than his partner. Furthermore, while he was not as ruthless as Gaear he is still willing to kill people for minor slights. An example being the parking lot attendant. 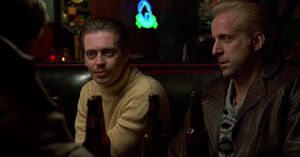 Carl and Gaear Grimsrud meeting Jerry Lundegaard in a bar. 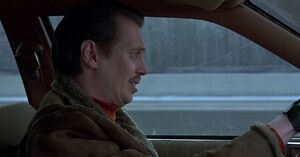 Carl driving in his car. 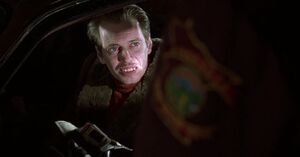 Carl is pulled over by a police officer. 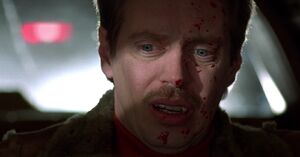 Carl is shocked when Gaear kills the police officer right in front of him. 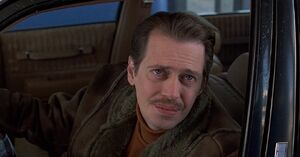 Carl arguing with a ticket officer at a car park. 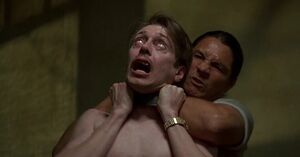 Carl being strangled and beaten by Shep after sleeping with a prostitute. 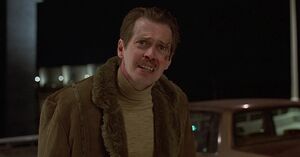 Carl surprised when Wade Gustafson meets with him instead of Jerry. 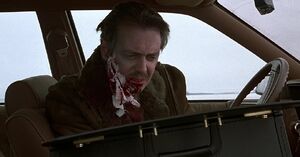 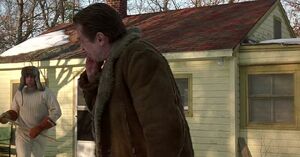 Carl about to be hacked to death by Gaear with an axe. 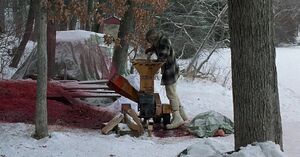 Carl's dismembered corpse is fed into a wood chipper by Gaear.