Have Nicholas Mendoza participate in a drug bust.

Sergeant Carlos "Carl" Stoddard is a corrupt police officer and the secondary antagonist in the 2015 video game Battlefield Hardline.

He is the right-hand man of Julian Dawes and the employer of Tony Alpert, who is a corrupt official in the Miami Police Department during the Miami drug war. In addition, he was Nicholas Mendoza's former partner, whom he framed alongside Dawes and Khai Minh Dao to cover their corruption.

He was voiced by and modeled after Travis Willingham, who also played Jūgo in the Naruto series, Jul 'Mdama in Halo 4 and Halo 5: Guardians, Buzz in Skylanders, Shane in InFamous: First Light, Paul "De Pleur" Harmon in Far Cry 4, Satan in Saints Row: Gat out of Hell, Scabrous Scrotus in Mad Max, Cameron Campbell in Camp Camp, Harvey Dent in Telltale's Batman, and Kingpin in Marvel's Spider-Man.

Stoddard was a former college football star, who later joined the force as an alternate to joining the US Army. He married and had two children, Decker and Mina who got a signed Tamu Tamu poster from Remy Neltz, though their official relationship remains unknown.

A severely corruptive Stoddard quickly coasted his way into Vice, with Captain Julian Dawes using him for various dealings with criminals such as Neil Roark and Henry Kang. In doing this, he became Dawes's number two, and joined his network of corrupted policeman, military contractors and mercenaries.

Stoddard became the partner of the Vice's new detective Nick Mendoza in 2012 and showed him the ropes of being on the force.

On their first field day as partners in 2012, Stoddard and Mendoza participated in a drug bust gone wrong when the two detectives were fired upon while arresting armed drug dealers. With no one left to interrogate, the last remaining drug dealers unknowingly walks onto the scene with lunch for his deceased companions. Seeing what has happened, the man proceeds to run, prompting Stoddard and Mendoza to chase him down, eventually leading to a car chase through Miami. During the chase, Stoddard was able to get close enough to the criminals car, allowing him to shoot out the tires, resulting in a subsequent crash and arrest of the suspect.

After the incident, Captain Dawes partnered Mendoza with Detective Khai Minh Dao and warned Stoddard that he would be on special detail.

Later, while Mendoza was trying to arrest drug dealer Remy Neltz and interrogate him about a deal he mentioned to have made with Stoddard, Stoddard moved in and shot Neltz dead, shocking Mendoza. Stoddard then offered to bribe Dao and Mendoza, but a disgusted Mendoza angrily left the scene. They would later inform Dawes about this who then encouraged them to find any evidence that links Stoddard to Neltz. Mendoza managed to find some conclusive evidence in the form of a tape recording by Neltz and later encountered Stoddard as he attempted to recover Neltz's cash.

Following a firefight with the remnants of Neltz's men, Mendoza held off arresting Stoddard as he need him to help rescue Khai from the rest of the men at the mall. Successful, the three managed to escape and presented the evidence to Dawes who then destroys it and reveals that Stoddard had been working on his behalf the entire time and that Khai and the rest of the police had been on it. Due to Nick's inability to become corrupt, they arrest him and frame him for stealing the last funds which Neltz was trying to transfer in his money laundering scheme.

3 years later, while being transported to prison, Mendoza is saved by Tap Milstein, Tyson Latchford, and Khai Dao who recruit him in taking down Stoddard and Dawes.

While investigating the house of Neil Roark, Khai and Nick witness a meeting between Stoddard, Roark, and other crime lords over making a deal to pay for Preferred Outcomes services. Afterwards, Khai leaves to try and apprehend Stoddard, but to no avail as Roark discovers Mendoza's presence on the property.

Mendoza and his crew formulate a plan to break into Dawes' vault to steal all his money and thereby ruin him. To do so, however, Marcus Boone suggests they pick up a special safe cracking device known as the Brute from Tony Alpert, to which everyone agrees. During their meeting with Alpert, however, they learn that Stoddard had put a $250,000 bounty on Nick's head alive, prompting Alpert to capture Nick for the bounty and Boomer out of shear hatred.

While Alpert had made arrangements with Stoddard for him to come get Nick himself, he later learned that his prisoners had escaped and was killed by them soon afterward. Despite this, Stoddard was able to track Mendoza back to his hideout and proceeded to raid it. Upon doing so, he took Tyson hostage before being struck in the head by Khai. After dealing with her, he found himself at gun point where he was then shot and killed by Nick.

Immediately after his death, Stoddard's phone received a call from Dawes who requested an update on the situation. In spite of his former Captain, Nick let the call go to voicemail and took a picture of Stoddard's corpse before sending it to Dawes to let him know his right hand man is dead and that they're coming for him.

Upon discovering Dawes' location, Nick proceeded to confront him alone due to the circumstances. While making his way toward Dawes, Nick overhead his men talking of Stoddard's death. Inside the compound, Dawes mentions Stoddard's death as an example of how ruthless Mendoza has become and offers him to be his new right-hand man in his organization and eventual successor. Despite this, Mendoza decides to enact his revenge against Dawes once and for all and fatally shoots him. 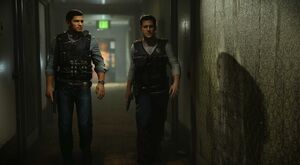 Stoddard and Mendoza in the prologue. 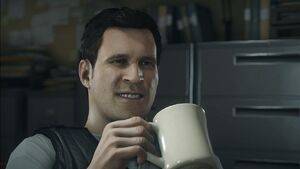 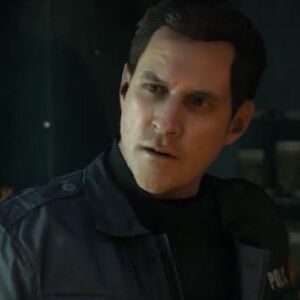 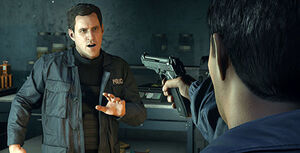 Stoddard being held at gunpoint by Mendoza. 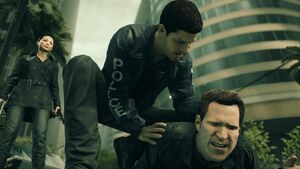 Stoddard being apprehended by Mendoza, moments before un-cuffed during the betrayal. 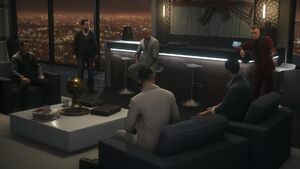 Stoddard and Neil Roark negotiating with criminals at the latter's estate. 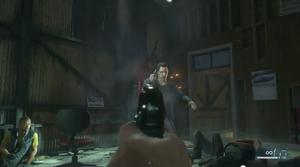 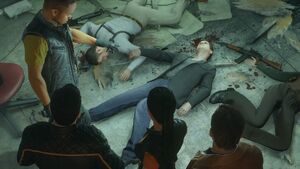