Get revenge on Sid for ruining their salad (failed).

Carl and Frank are two supporting antagonists in the first Ice Age film, as well as the Ice Age: Dawn of the Dinosaurs video game and the Ice Age: Scrat' s Nutty Adventure video game.

Carl and Frank are seen in the beginning of the film, about to dig into a leaf salad topped with one of their favorite foods, a dandelion. However, Sid the sloth approaches the pair, uses the salad to wipe off some doedicurus droppings he'd stepped in earlier, and eats the dandelion, all while rambling on about how rhinos have small brains. Carl and Frank are angered by this, and Sid realizes his mistake.  He tries to deescealate the situation by trying to feed the rhinos pinecones, but this only further antagonizes them. Realizing he can't calm them down, Sid turns and runs away, with Carl and Frank close behind.

However, Sid encounters Manny the mammoth, who sides against Carl and Frank beause he doesn't like animals that kill for pleasure. Manny tries to intimidate the rhinos into backing off, but they continue charging towards him and Sid. So, Manny uses his superior strength to lift and throw Carl and Frank to stop them from reaching Sid. Defeated, Carl and Frank decide to wait until later to retaliate against Sid.

Their opportunity for vengeance comes up later, when Sid mistakenly wanders into their mud pool. Still harboring a grudge against the sloth, Carl and Frank give chase and pursue Sid once more. However, Sid once again gets a lucky break when he runs into Diego the saber-toothed tiger and convinces him to hold Sid in his mouth as if he were going to eat him. Carl and Frank see Diego holding Sid in his mouth and assume he's been killed. Dismayed that their chance to kill Sid is gone, the rhinos sadly walk away, remarking that "carnivores have all the fun."

They aren't seen again through the rest of the film and even in the next chapters from the whole series. Thus, it's unknown if Carl and Frank survived the Last Glacial Period, the Pangaea or the Big Bang.

At the beginning of the story, Frank is seen in the cave paintings when he wanted to chase and ram Sid for disturbing him, omitting Carl from the event.

Frank, in solitary, will appear as a boss in which Manny and Roshan must face him by throwing nuts at him from another side of a cliff.

Carl and Frank appear in the Ice Age Dawn of The Dinosaurs video game, despite the fact that they're never seen in the actual Dawn of the Dinosaurs movie.  Early in the game, they break into Manny's playground to get revenge on Sid by pummeling him and wrecking the playground.  However, Sid defeats the rhinos by tricking them into ramming into some rocks that Manny wanted destroyed, forcing them to give up and leave the playground.

They return in this 2019 videogame where they bully Scrat by kicking him away. Then they attack him multiple times with Scrat fighting them, at the end they are both defeated when they bang their hands in the mural where Scrat was trying to go.

There appearance are almost similar to Kron and bruton from dinosaurs. Both intense and strict creatures who show no mercy. And both reveal their not the true antagonist. 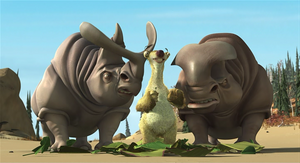 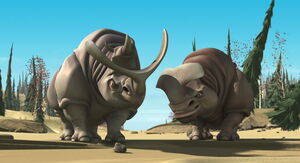 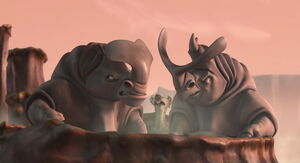 Carl and Frank Growling at Sid 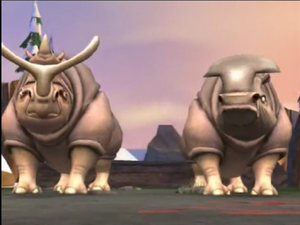 Carl and Frank in the Ice Age: Dawn of the Dinosaurs videogame 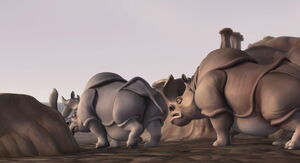 "Carnivores have all the fun" 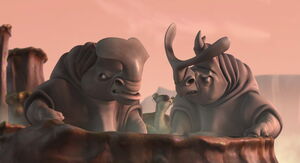 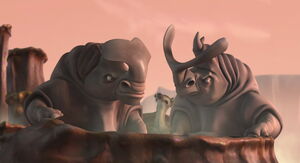 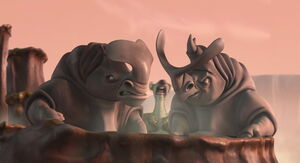 Carl and Frank Snarling at Sid 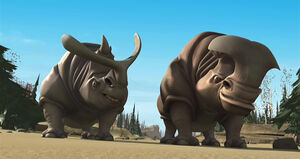 Want some pinecones to eat?