Carl the Llama is the villainous main antagonist of Llamas with Hats. In each episode, he is shown to have gruesomely and graphically murdered a human, or group of humans, and then has to explain it to his best friend named Paul, much to Paul's shock and horror.

He was voiced by Chris Alex.

In episode 1, Carl explains the murder of a man who walked into his home and how he ate his hands. Paul is shocked and horrified, as apparently Carl had never done this in the past.

In episode 2, as Carl and Paul watch the ship sink from a bloodied lifeboat, Paul reiterates how Carl fired a harpoon in the captain's face, headbutted children off the deck, and killed an elderly couple for taking the crescent rolls. Carl also put holes in all of the life boats, and there were no survivors.

In episode 3, Paul discovered his vacation was ruined as Carl toppled the South American government, killing the resistance leader and eating a bartender. He also mentions that he is collecting orphan meat in order to build a meat dragon, after which Paul accepts that this is the norm for Carl. Carl seems confused when Paul tells him his name, having been confused by his gender because of the hat.

In episode 4, Paul is seen complaining because Carl tracked mud on the carpet. However, he is interrupted by a massive explosion, followed by Carl (incorrectly) wishing him a happy birthday. Soon after, balloons attached to detached faces float by, disgusting Paul immensely. He demands an explanation, followed by Carl explaining that he is just a dangerous sociopath, not understanding how he keeps forgetting.

In episode 5, Paul is becoming ever suspicious of Carl, demanding he tell him about his day. He explained how he washes his car, made a donation to girl scouts, baked banana bread for their neighbor, and stepped on a ladybug by accident, forgetting to mention that he ripped the fabric of space-time to collect baby hands. Paul, expecting worse, was curious about why all the baby hands were white. Carl responded with "Whitie's gotta pay, and the payment is baby hands."

In episode 6, Paul threatens to move out when Carl installs a meat conveyor in their home, calling the meat grinder an "orphan stomper." He tells Paul about a surprise, but is not happy with his attitude and decides not to show him. At the end of the video, the meat dragon reveals itself, while Paul nonchalantly reacts by saying it is horrifying.

The Hand Chair Made of Faces

In episode 7, Paul has moved out and Carl is beginning to show signs of mental deterioration as a result. Carl has put a mask of Paul on what appears to be a sheep to try and replace him. The sheep appears to speak gibberish, but Carl is apparently able to understand it. Carl has taken up carpentry and has made a chair in the shape of a hand, but Carl "made his art more modern by using face parts of city council members," because he disagreed with the election results. Then the "Paul-Sheep" sits down, which deeply disturbs Carl. Carl presumably killed the sheep at the end of the episode.

In episode 8, Carl visits Paul's new apartment after burning down his house and spending all his savings on swans, asking if he received his apology piano, to which Paul replied that pianos weren't supposed to bleed and scream, and threatens to call the police. Paul puts on some music to shut Carl out, while Carl has a conversation with himself while imitating Paul, which further hints that Carl is going insane without his former friend's company. Soon after, Paul receives a swan piano, much to his displeasure.

The Mask Comes to Life

In episode 9, Carl has another conversation with his Paul mask after dismembering someone. After "the mask" tells Carl that he hates him, it becomes sentient and tells him that there is much to do. It soon asks what he is planning, to which Carl responds that he is just "taking things as they come". The mask tells him that he is better than that, emphasizing that he is actually Carl.

In episode 10, Carl falls into his Gore Pit filled with severed limbs. The mask goes to find a light and tells Carl that he is in great danger and that his work is not yet finished. The Paul mask mentions that they need to get out because something is down there with them, but Carl says that it is only the basilisk, adding that it will not bother them because it only eats Chipotle. While the Paul mask goes to find some rope, Carl reminisces about his first incident. The mask fails to find the rope, telling him he must escape on his own, and they have a conversation similar to the one from the first episode.

In episode 11, fifteen years have passed. Carl, now unshaven and having replaced one of his hooves with a wooden leg, has wiped out the entire population, but the mask still pushes him to "finish his work". Carl looks out over a wasteland and reflects on the many bloody deeds from his past, namely the blood vortex in Paris and an orb made of nerves that consumes human flesh. Carl then tells the mask he doesn't believe he is Paul, but it denies this. Carl threatens to set out to find the real Paul, saying he won't be very happy and will be even more angry with the mask. They then continue to shout the other's name at each other.

In episode 12, Carl walks into Paul's apartment, now nothing but a pile of rubble, and finds his skeletal remains. Carl is saddened as he realizes his friend's death, and the mask falls silent again, confirming that Carl had been hallucinating its sentience all along. Carl stands atop a wrecked bridge, shouting his own name and shedding a tear before jumping into the water below and drowning. 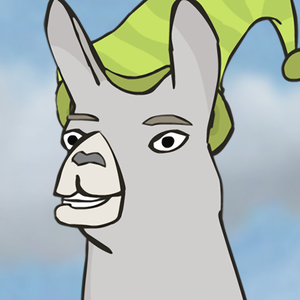 Carl
Add a photo to this gallery

Retrieved from "https://villains.fandom.com/wiki/Carl_the_Llama?oldid=4370364"
Community content is available under CC-BY-SA unless otherwise noted.