Plotting revenge against the United States.

Infect the United States of America with a zombie virus for revenge (partially succeeded).

Carlito Keyes is the central antagonist of the 2006 video game, Dead Rising, and a posthumous antagonist for the rest of the series.

He is a Central American terrorist and surviving victim of the Santa Cabeza zombie outbreak, who takes on the sole duty of retaliating against the US government for their part in the outbreak. He is also the one responsible for calling Dr. Russell Barnaby into visiting the small town of Willamette, Colorado. He was also Frank West's archenemy.

He was voiced by Alex Fernandez.

Carlito was born in a small village in Central America, known as Santa Cabeza, where he lived with his parents and his little sister, Isabela. Santa Cabeza was also the location of the American Livestock Research Facility, where a top secret US government facility that secretly conducted experiments on the effects of zombism on animals to make more meat for America´s citizens to eat.

One day, due to an escaped group of genetically infected wasps, Santa Cabeza was overrun with zombies, infecting most of the villagers, including Carlito and Isabela's parents, which then lead to the American military arriving and shooting everyone on sight, human or zombie. Carlito and Isabela soon developed a strong hatred for the US government for their failure to take responsibility for the outbreak and covering up the incident instead.

Carlito and Isabela survived and escaped the Santa Cabeza outbreak and the attempt to cover it up by the US government. They then went on to achieve higher knowledge in the fields of medical engineering and biology; as well as helping to re-establish the lives of other survivors of the Santa Cabeza incident (mainly children left orphaned by the event, much like themselves). Carlito and Isabela never forgot what happened at Santa Cabeza, and they never forgave the United States for their handling of the situation, leading to a deep-seated hatred for the government and Americans in general.

They found 50 orphaned children that Carlito infected with the parasites and then gave them a suppressor (Zombrex prototype) that prevented them from turning into zombies for an unknown period of time. They later put the children up for adoption, finding them homes in the United States in different locations, mainly in largely populated cities and states. The plan was to let these children become "zombie time bombs" to infect the whole country as a true act of revenge for the massacre in Santa Cabeza.

Most of the planned outbreaks were contained with minor losses. The larger outbreaks was not directly caused by Carlito's time bombs, but a company named Phenotrans that were starting outbreaks to have resources to Zombrex.

Carlito's hatred for America and their government finally culminated in his terroristic attack on the town of Willamette, Colorado, where he released salvaged genetically zombified wasps into the general public, infecting the entire town.

Carlito's game plan for getting revenge on the American Government was as follows:

The only flaw in Carlito's plan was the government's interference, blocking off all road entrances to the town, allowing only two reporters to make it inside the town, Kent Swanson and Frank West. Upon realizing this crucial failure in his plan, and that now the government would simply cover up the incident like before, he found no use in Frank or Kent, leaving the mission to carry out as an act of revenge.

Carlito is first met in game when he is encountered on the roof top of the Willamette Parkview Mall, where he meets Frank West, one of the only reporters who made it into the town.

Later, as Frank goes out to help Brad Garrison, a mysterious man Frank met earlier in the mall, he finds him in the food court where he is being shot at by Carlito. With the teamwork between the two, they defeat him and he escapes. Frank, now joined with Brad, who reveals himself to be a DHS agent, helps him and another agent Jessie find out the mystery behind the entire incident.

Carlito, now armed with a sniper rifle, is encountered again after taking Dr. Barnaby, a strange survivor, hostage in the Entrance Plaza. Once again Frank joins up with Brad and takes Carlito down. As Carlito retreats he is shot in the arm, and shoots Brad in the leg, leaving him seriously injured.

After confronting Isabela, Frank gets her to try and convince Carlito to surrender, leading to a disastrous result. Carlito, now beginning to lose his very sanity, shoots Isabela, leaving her running back to Frank for help. Isabela, now siding with Frank, Brad, and Jessie, tells them her and Carlito's backstory from Santa Cabeza, and that Dr. Barnaby was the lead scientist at the American Livestock Research Facility, responsible for the Santa Cabeza outbreak, thus finally revealing Carlito's motive and his lust for revenge.

After a brief period of laying low, Carlito's voice is heard over the mall's intercom announcing how he is sorry to Isabela, and that he is out of options, and that this is "the last resort." Isabela explains that if Carlito had ever gotten cornered, he would blow up the mall. This would thereby launch the wasps into the atmosphere, spreading them across the entire country. There are five bombs, located in the maintenance tunnels underneath the mall, which Carlito plans to flood with flammable gas right before they go off. With the fate of the world on the line, Frank and Brad have to stop the bombs themselves. In one last fight against Carlito, Frank takes down Carlito in the maintenance tunnels, where he tries to kill Frank with a truck.

After Frank disables his truck, Carlito flees, leaving Brad to chase him down while Frank handles the bombs. Frank successfully takes the bombs out of the maintenance tunnels, allowing them to blow up away from the gas. Brad, after a shoot out with Carlito, shoots him in the stomach and disarms him. As Brad approaches Carlito, ordering him to surrender, Carlito pulls a knife on him and pushes him out into the maintenance tunnels, where he's attacked, unarmed, by a horde of zombies.

With Brad dead, Isabela safe, and Carlito nowhere to be found, Frank and Isabela travel to Carlito's hideout. There they find that Carlito had set up a jamming device around the mall, preventing Brad and Jessie from calling for back up from DHS headquarters. In order to disable the device, Isabela must first log into his computer, but she doesn't know the password, leaving them unable to call for backup.

Frank suddenly gets a call from Jessie, telling him she's seen Carlito on the monitors. Frank travels back to the security room to see that it is Carlito, and he's being dragged by a large man through the maintenance tunnels. Frank travels there and comes across the mall's personal butcher room, where Carlito has been held captive by a deranged butcher, who plans to make Carlito into "fresh meat". Frank takes out the butcher and rescues Carlito, who is finally succumbing to all the wounds from their encounters. As Carlito dies, he gives Frank a final monologue about the zombies and what he's done, and hands Frank his necklace to give to Isabela. He never tells Frank the password.

Frank returns to Isabela and tells her that Carlito's dead. As she begins to mourn over him, Frank gives her his personal outlook on Carlito, stating how in the end he was never truly evil, only a man driven to madness by the love for his family and his sister, and that the military is the real villain. And that once they escape, the Santa Cabeza incident will be known, and the government would be held responsible for its involvement. As Frank gives Isabela the locket, which contains a picture of Carlito and Isabela with their parents, it reminds her of a word their parents said constantly "Pachamama" or "Mother Earth", which turns out to be the password, revealing this to be Carlito's intention when giving Frank the locket.

Carlito was mentioned by Stacey where she had a conversation with Chuck about Isabela's research for cure.

Carlito was was mentioned numerous times, first seen as a cutout where his actions were shown. Then mentioned by General Hemlock where he tells Marian that Carlito and Isabela made a whole cure thing to lie to her, and the last time is when Nick tells Hemlock that Carlito did create a cure that Nick has.

Carlito's voice (alongside other characters as well) was heard in Frank's nightmare saying "Aren't zombies great?", the quote that he told Frank in their last conversation.

Carlito, alongside Jessie, Brad and Frank appears as the protagonist of this version, it's unknown who caused the outbreak since Carlito is a good guy in this one. 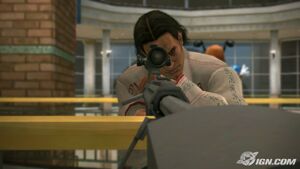 Carlito with a sniper rifle. 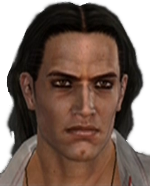