Legend of the Lost Tribe

To aid Blitzen with his theme park

Carlos is the secondary antagonist of the second Robbie the Reindeer film Legend of the Lost Tribe. He is a criminal hamster who is the controller of a robot master of disguise rabbit called Long Eared Jack and aids Blitzen with his theme park "Blitzen's Reindeer World". His cover is blown when Prancer pulls off all of Jack's masks revealing Carlos who says that his life in crime is over. He along with Blitzen and their Rabbit Thugs are then sent back to prison.

He is voiced by Alistair McGowan, who also voiced Dollmaker in Alice: Madness Returns, in both the original British version and it's American redub. 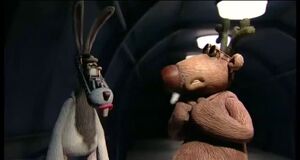 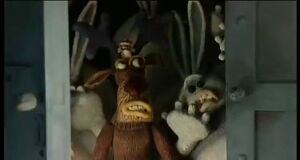 Retrieved from "https://villains.fandom.com/wiki/Carlos_(Robbie_the_Reindeer)?oldid=3882668"
Community content is available under CC-BY-SA unless otherwise noted.