Unite the world of the living and the dead to rule both realms (failed).

Before the events of the game, Carlos was a famed charro, who wanted to win the "La Gran Charreada". However, the night before the event, he broke his arm. Wanting to win, he made a literal deal with the devil to win. However, just as he won, he was taken to the World of The Dead. Furious at his defeat, he and X'tabay managed to trick the Devil into becoming a rooster. Taking control over his domain, he planned to merge both the living and dead worlds so everyone could obey his rule.

In the start of the game, he, along with Flame Face, Jaguar Javier, and El Trio De La Muerte, kidnap El Presidente's Daughter and kills Juan Agucate. However, Juan managed to come back to life through his luchador mask, making his way through his forces. At the Great Temple, Carlos does managed to complete his ritual and transform into a demonic like form, but ultimately loses again Juan, dying in his rematch.

In the game's Darkest Timeline, Carlos does manage to kill Juan, but also meets his end in this timeline as well, this time by the game's main antagonist, Salvador. 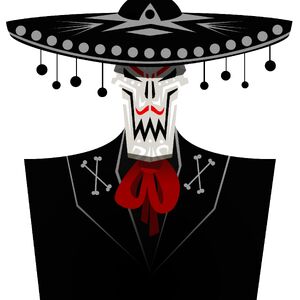 Add a photo to this gallery
Retrieved from "https://villains.fandom.com/wiki/Carlos_Calaca?oldid=3418489"
Community content is available under CC-BY-SA unless otherwise noted.