From Dusk Till Dawn

Carlos Madrigal is a major antagonist and an anti-villain in the horror TV series From Dusk Till Dawn and is a ruthless drug lord and a vampire. In the series, Carlos is the main antagonist in Season 1, one of the two main antagonists along with Amancio Malvado in Season 2, and an anti-hero in season 3. He was the boss of the Gecko brothers and helped them get into Mexico to fulfill the prophecy of freeing Carlos' love, Santánico Pandemónium.

He is portrayed by Wilmer Valderrama.

Carlos is an immortal culebra, a snake-like vampire, that's over 500 years old, from Spain. In the 1500's, he was a soldier in the Spanish army under the command of the famous conquistador, Hernán Cortés. As they arrive in Mexico, Carlos claims the land for Spain, with Cortes' blessing. Later, he expressed that he only cared about the gold in the country. Cortes advises him to have the natives (more likely Aztecs) give him a tour of the area. The natives guide him to a temple where he meets an immortal celubra, Santánico Pandemónium, whom some of the natives considered as a queen and worshiped as a goddess. They fall in love and she turns him into a celubra. Cortes' men find the temple and Carlos shows up and kills them. Afterward, he decides to stay with Santanico.

In the 1800's, Carlos is spending time with Santanico and complimenting on her, due to being abused and controlled by the Vampire Lord, Amancio Malvado. Malvado then shows up and mocks Carlos and sends him away.

In the 1900s, he meets Narciso Menendez, who was one of the Pancho Villa bank robbers and was the most handsome of them. Carlos offers him immortality which he accepts. Carlos then turns him into a vampire.

Sometime in the 21st century, Carlos meets Seth Gecko and visits him in prison. He offers Seth a job to work for him once he is released which Seth accepts along with his younger brother, Richie.

Carlos first appears when the criminal Seth Gecko is calling him for help for the former and his brother Richie to get to Mexico as half of the state of Texas is looking for them.

Carlos later murders Katie's boyfriend Kyle after he hitchhiked for a ride and chat about his girlfriend. As Kyle, Carlos reveals Jacob to be a minister who has lost his way. Carlos meets up with Narciso, who is now a lieutenant of the Nine Lords of the Night and some officials and he brings a truckload of people for them to snack on. When the Gecko brothers took the Fullers as hostages, Carlos takes the form of the chief border agent allowed the RV to go to Mexico. Sometime after the Gecko brothers and the Fullers arrived at the Titty Twister club, he took the Texas Ranger Freddie Gonzalez hostage as he was after the Geckos and later introduced the vampire Santanico to the crowd as she danced. However, after a fight and a bloodbath breaks out in the club, Santanico retreats and meets with some calubra officials and Narciso Menendez, which ended in the officials being slaughtered. Carlos is later ordered to fight and kill Ranger Gonzalez. During this time, It is revealed that Carlos had a relationship with Santanico and brought Richie as a progeny.  Narciso captures Carlos and has him reeducated by having him go through the labyrinth

While in the labyrinth, Carlos is walking out an entrance with a crazy look and shaggy, long hair, and is also humming.

He is later confronted by Amancio and asks about the bond. He is considered crazy as he has been in the labyrinth for awhile. He then makes another plan of his and has Scott accompany him.

Carlos is then seen walking into Seth's motel room and asking him where Richie and Santanico are. Seth tells him he doesn't know nor does he care, and he ends up shooting Carlos multiple times, but it does nothing. Seth runs and gets into the car with Sonja and drives off. Carlos is seen standing in the doorway of the motel room and looks with satisfaction.

Carlos goes to Amancio to ask him about finding Santanico and is brushed twice by him. He is then grabbed by the throat and slammed on a table, and that he is no use anymore. Afterwards, Carlos heads towards Nathan Blanchard's place and watches all the girls that are on the stage. He sees Paloma and notices she dances just like Santanico. He buys all the girls and takes Paloma to a secret room, with music playing and dances with her. He throws her on the bed and she tells him that the goddess protects her, which leads him to ask her what she just said. He tells her she is a goddess and that she will be his forever, and Santanico comes in still disguised as Madame Diana and then slaps Paloma and tells her to get to the truck. Carlos tells her he knows who she is and transforms back into her true self. They talk and she then vamps out, ready to attack him. Instead, he fires multiple bullets at her and then incapacitates her with a bullet wound to the head, and carries her off through a door.

He tries to convince Santanico to come back and be there for her people. But then theRegulator shows up and attacks bothe of them. They face off and Santanico gets away but Carlos is captured. Carlos tries to make a deal with the stone warrior but is declined.  The Regulator then takes him back to the Titty Twister and hands him over to Naciso.  Narciso interrogates Carlos about the remaining bonds, offering to let him run the club how he likes it. Carlos stalls and is then rescued by Scott whom killed Narciso's driver. They capture Narciso and offers to set him free if he lick his boot and submits to him.  Narciso refuses and the former conquitador beheads him, and orders Scott to put his head in the car. He then takes out a detonator and blows up the nightclub.

He and Scott head to Celestino Oculto's mansion and infiltrate it. He then takes Kate with them and uses her in one of the steps to find the blood well. He then gives her to Amancio in a deal. He then has Freddie incapacitated for a short while and he goes to the blood well with his team. He reveals that has a girlfriend named Maia and begins the process. He then shoots Kate twice and goes with Maia to deliver the truck to the culebras. He then fights against Santanico and begins a frenzy inside Jacknife Jed's. He is then dismembered by Scott as he reveals that since he was in the labyrinth, he was granted powers.

He is put back together by Santanico as she needs his help. She and him then face off against Tatuaje, and they kill him. He also reveals that he made a deal with Xibalba for power.

He joins the team in the final battle against Amaru  and tries to keep convincing Santanico to be there for their people. After Amaru's defeat, he goes with Santanico and leaves on somewhat good terms with the Geckos. 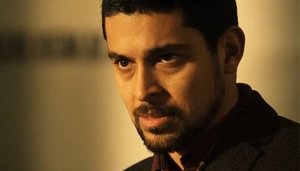 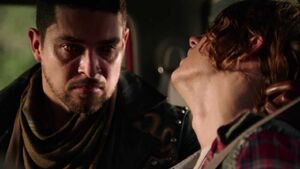 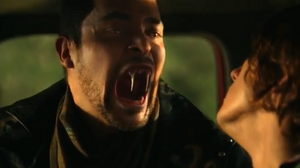 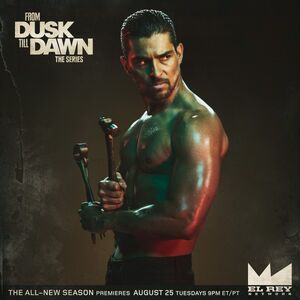 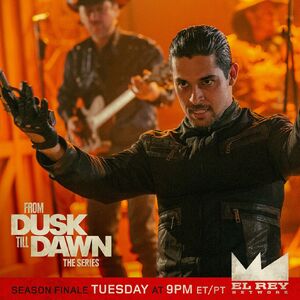 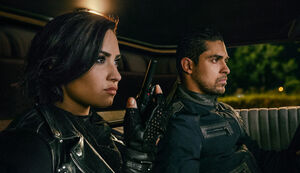 Retrieved from "https://villains.fandom.com/wiki/Carlos_Madrigal?oldid=3546309"
Community content is available under CC-BY-SA unless otherwise noted.