Greedy Terrorist
Carlos Nikolic is a minor antagonist of the 2006 James Bond film Casino Royale. He is a freelance weapons manufacturer who was in league with Le Chiffre of Quantum.

He was portrayed by Claudio Santamaria, who also played Carlo Sturni in The Card Player.

Following the death of Mollaka Danso in Madagascar, Le Chiffre hires Carlos to sabotage a aerospace company called Skyfleet by destroying its S570 prototype. To that end, Carlos met up with with Quantum financier Alex Dimitrios to speed up the process.

Posing as a police officer, Carlos awaits for Alex's arrival to the Miami International Airport, unaware that James Bond has already killed Alex. Using Alex's phone, Bond was able to trace down Carlos' location. Upon realizing that he has been spotted by Bond, Carlos runs out onto the runway where he commandeers a fuel truck before heading off towards the prototype, attaching a small bomb to the underside of the tanker.

Bond manages to board the tanker, but Carlos jumps off after a brief fight, forcing Bond to stop the tanker from crashing into the plane before he is arrested by airport security. Watching Bond being arrested, Carlos smugly activates the bomb, but realizes too late that Bond previously attached it to Carlos's belt. As such, Carlos dies in the resulting explosion.

Bond eventually learned that Quantum was nothing more than a front run by Ernst Stavro Blofeld of SPECTRE, and that Carlos, along with Le Chiffre and Dimitrios, were all pawns as part of Blofeld's true plot to wreak psychological pain on Bond. 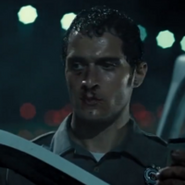