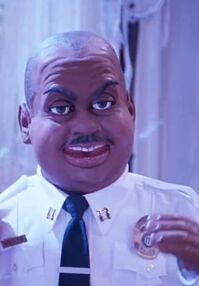 Carlsbad is the main antagonist of the television sitcom Family Matters. from the episode Stevil: This Time, He's Not Alone. he appears as a ventriloquist counterpart of Carl Winslow.

He was voiced by Ed Gale.

Stevil: This Time, He's Not Alone

Carl then goes to sleep in his bedroom, where this time it is he who is having the nightmare about Stevil who now has a sidekick of a dummy that looks like Carl called Carlsbad. Together they wanted both Steve and Carl's souls. Carl and Steve terrified run upstairs in the bedroom with which they used the dresser to block the door. The dummies break through but when the lightning flashes again and the lights go out Steve suddenly disappears and Carl assumes that they captured him. Carl goes downstairs to look for Steve and finds him in a blank coma sitting in the kitchen. The dummies appeared and Stevil talks with Steve's voice. Carlsbad proclaims "one soul down one to go" Carl enraged decides to fight the dummies but just as he is about to rescue to Steve the dummies attack him. Carl throws them both out the window and grabs Steve telling him that they must leave. But Steve yanks away Carl's hand and talks in Stevil's voice saying in a creepy way, "What's the rush?". Carl suddenly realizes that Stevil has possessed Steve's body and Stevil shoots green laser beams in Carl's eyes also trying to take his soul. Carl suddenly wakes up in bed revealing that the episode was his nightmare. He goes downstairs and apologizes to Steve for making fun of his nightmare after telling about his nightmare of Stevil. Carl tells Steve that if he ever has a problem with any of his nightmare he can always come to him for help. The duo leave the living room while Steve was trying to tell Carl all of his nightmares. 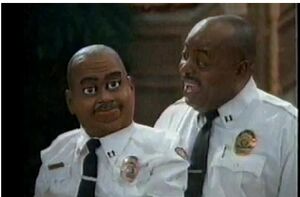 Carl Winslow holding Carlsbad.
Add a photo to this gallery 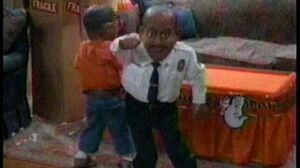 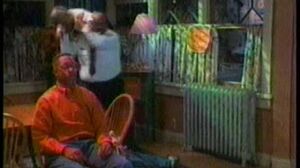 Family Matters Carl kills the Dummies!
Add a photo to this gallery
Retrieved from "https://villains.fandom.com/wiki/Carlsbad?oldid=3552082"
Community content is available under CC-BY-SA unless otherwise noted.