Kill Spider-Man and Venom so he can continue his experiments with the Symbiotes (all failed).

Complete the Arachnis Project to cure himself of his cancer (succeeded).

He is the leader of the hi-tech company called "Life Foundation" and is constantly at odds with Spider-Man and Venom. He transforms into a spider-monster hybrid named "Homo Arachnis" in the pages of Spider-Man: The Arachnis Project.

He hired Chance to steal European armaments. His men transport Chance to his survivalist facility "Sanctum Maximus", and demanded Chance's suit secrets. Spider-Man arrived to rescue Chance and the two destroy the facility while Drake escapes via helicopter.

Drake next teamed up with the foreign assassin Chakane in a plot to use the "Protectors" (enhanced, mindless mercenaries) for the assassination of Symkaria's king. The Protectors are defeated by Spider-Man, Paladin and Silver Sable but Drake's resources prevent any prosecution.

Afterwards, Carlton used the Tri-Sentinel for his clientele's protection. When deciding to do a "field test" against Spider-Man and Nova, the Tri-Sentinel is unresponsive to his controls and goes on a rampage. With nothing else to lose, Carlton has his men gather all the data and once again evaded capture.

Drake briefly teams up with Justin Hammer and Jonas Hale in an effort to steal superpowers for their own nefarious purposes, but are stopped by Spider-Man and the New Warriors.

Drake next went after Eddie Brock to use the Venom Symbiote to create five new Symbiote "children": Scream, Riot, Agony, Phage and Lasher. However, his symbiote enforcers are defeated by Spider-Man and Brock, forcing Drake to once again scrub the facility and escape while realizing that Spider-Man is more troublesome than he believed.

Carlton next funded his "Arachnis Project" in an attempt to create a race of arachnids and cure his cancer with Roland Treece and Orwell Taylor as co-conspirators. He forced Professor Toshiro Mikashi to use Spider-Man's blood for the project. Carlton is injected with his Arachnis serum (which should've been ingested to avoid an instant death), transforming himself into a Man-Spider like creature calling himself "Homo Arachnis". He lays waste to the entire facility, killing many of his former employees. However, the combined efforts of Spider-Man, Venom and The Jury send him falling beneath the facility. He later wakes up, a human but noticeably younger-looking, swearing revenge against the ones who defeated him. Despite this, he has not been seen since. 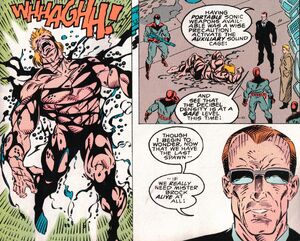 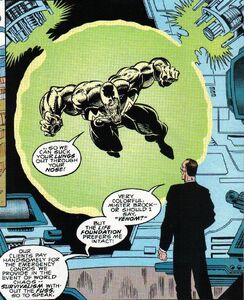 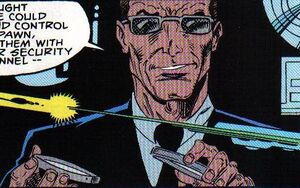 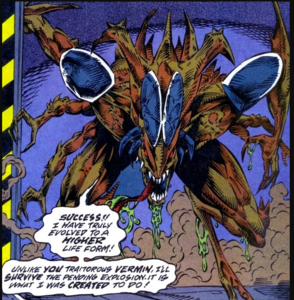 As Homo Arachnis
Add a photo to this gallery

Retrieved from "https://villains.fandom.com/wiki/Carlton_Drake?oldid=4255167"
Community content is available under CC-BY-SA unless otherwise noted.