Carlton Duquesne (pronounced Ducane) is a mob leader who worked with Bane, the Penguin and Rupert Thorne, and a supporting antagonist in Batman: Mystery of the Batwoman.

Carlton was a crime boss who lost his wife in attempted hit on him. This left him to be alone with his daughter Kathy. Years later, Carlton becomes a member and the muscles in Penguin's gang.

After Batman and Batwoman foiled their plans, Penguin replaces Carlton with Bane as the muscles of the group.

After Kathy was revealed to be Batwoman, Penguin believes that Carlton betrayed them and tries to kill him. He was saved Batman and reconciled with his daughter and agrees to testify against his former partners for a plea deal.

Afterwards, all four villains would be heard from no more. 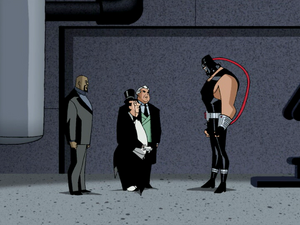 Retrieved from "https://villains.fandom.com/wiki/Carlton_Duquesne?oldid=3850733"
Community content is available under CC-BY-SA unless otherwise noted.