Where in The World is Carmen Sandiego?

Committing unusual crimes throughout the world and history

Carmen Isabella Sandiego is the titular main antagonist from the Where in the World is Carmem Sandiego series of games, as well as their cartoon and live action adaptations. She is the world's most wanted criminal, head of the criminal organization Villainous International League of Evil or V.I.L.E. for short, dedicated to commit the most impossible and/or inexplicable crimes. To her, committing crimes is just a game, a game which she plays very well.

Carmen Sandiego has nearly always been created through animation techniques in the games, either with various forms of computer graphics or traditional animation. The only instance where the character portrayed in live action (excluding photographs in early game manuals) is in the Where in Time Is Carmen Sandiego? game show.

Where in the World Is Carmen Sandiego?

The first time the character's voice was heard is in Where in the World Is Carmen Sandiego? Deluxe Edition during her trial after she is captured by the player. Her voice was featured regularly in the World game show though only during the phone tap skit.

In this show, her personality was slightly explored, other than being constantly exasperated by her crooks' incompetence and showing sarcasm. No voice artist was credited; however, later performers maintained the distinctive slightly dusky voice she was given on the said show.

In both Where in the World is Carmen Sandiego? Treasures of Knowledge and Carmen Sandiego: The Secret of the Stolen Drums, the character's voice was provided by Christiane Crawford.

Where in Time Is Carmen Sandiego?

In Where in Time Is Carmen Sandiego?, Carmen Sandiego had little personality like in deluxe edition of Where in the World Is Carmen Sandiego?, but here, she was generally portrayed as a straight villain. Furthermore, her face was never fully visible and all images of her were posterized, giving her a stylized, unreal look. Although the actress portraying Carmen in the show was not directly credited, it has been confirmed that she was played by Janine LaManna in the first season, and later Brenda Burke until the show's cancellation.

Sandiego appeared in the Netflix series protrayed by Gina Rodrigeuz, but more as a heroic character then a villain.

Little or nothing is known about Carmen's past. She is an ace detective for the ACME Detective Agency who found catching criminals too easy and decided that outsmarting ACME itself would make for greater challenges. She left ACME and founded the criminal organization V.I.L.E., recruiting the world's most wicked criminals to work for her. VILE seeks to commit the most unimaginable and impossible crimes.

Carmen steals only for the challenge of it, although some of her VILE minions seem to be more traditionally motivated. She often describes her schemes and the protagonists attempts to stop them as being a game, which they ironically are, regularly gloating that she is impossible to capture or that her plans are infallible and acting as though any efforts made against her are extremely trivial. Sometimes, she asserts that it is impossible for anyone to understand her or her motives and seems to revel at how difficult she can make it for anyone trying to figure her out.

When the computer games first debuted, Carmen was not given much of a character outside of mentioned hobbies and preferred activities (other than theft of geographical landmarks). During the time of the game shows, she was given a slightly better insight in terms of character, but still not given much of a personality other than being an "evil for evil's sake" villain.

The most personality that Carmen has shown in any of her media was in the "Where on Earth" cartoon series. With the more profound analysis of her backstory, her character was expanded and moreso changed into that of an anti-heroine, having become a thief not only because it was her ideal of a better life with more "fun", but also for the mental challenges and thrills the lifestyle provided. While she does still command V.I.L.E., she is mostly seen working by herself in a major heist, while her henchmen provide support in the background or simply make the way clear for entry.

Despite her major power over V.I.L.E., Carmen follows rules of her own regarding her crimes, the most important being that she doesn't kill or harm her rival ACME agents, with a special care taken towards siblings Zack and Ivy, her most active pursuers. She will actively aid them if something goes wrong during a chase and their lives are on the line because of it, or if a villain with the same power as hers tries to attack them outright. She will also never carry on with a heist if it involves putting someone else in danger (unless someone blackmails her into it), and while she doesn't show regret over putting someone in danger, said "danger" is often something that she is truly harmless towards the chaser, partially justifying her lack of worry.

Carmen has been also shown to be extremely hard to defeat in an emotional level, and rarely ever cracks under pressure, even though it can indeed happen. While she treats every new heist as a game, there are times when the case becomes personal enough to make it serious for her and anyone else involved, and while not a traditional and superstitious person, Carmen does not believe in exaggerated coincidences, or acts extremely disrespectful and vituperative towards other cultures, and might even use one of her crimes to solve personal problems involving these cases. 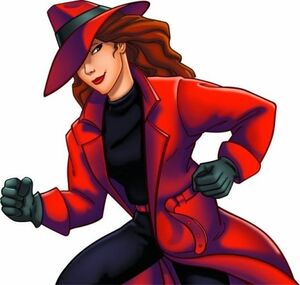 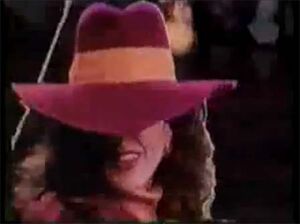 Carmen as she appeared in the "Where In Time" TV show, the only time she's been officially portrayed by a live actress 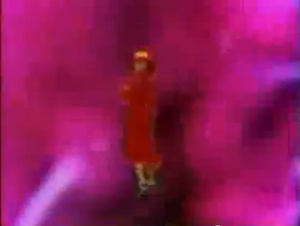 Carmen evades capture in season 1 of "Where In Time" 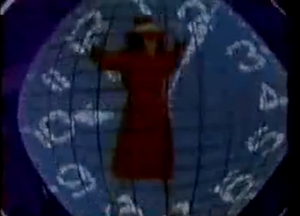 Carmen is captured in season 1 of "Where In Time" 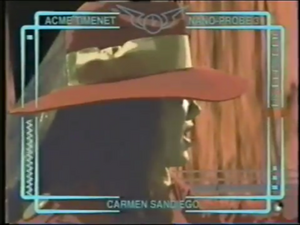 Carmen in season 2 of "Where In Time", the actress from season 1 having been replaced for unknown reasons 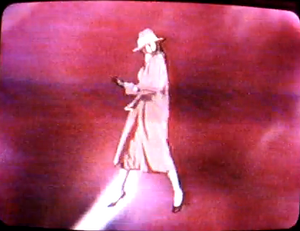 Season 2 "Where In Time" escape. 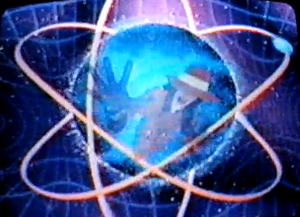 Season 2 "Where In Time" capture. 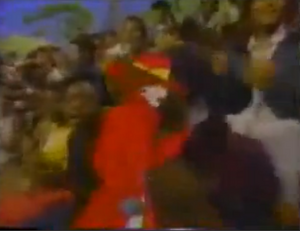 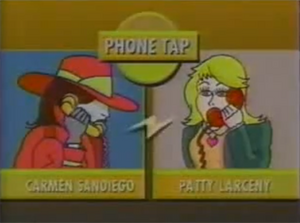 Carmen tells Patty Larceny where to go next 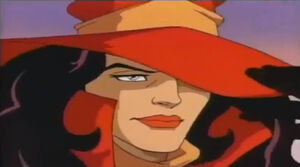 Carmen as she appeared in "Where On Earth Is Carmen Sandiego?" 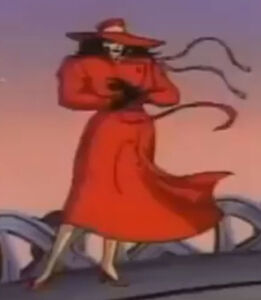 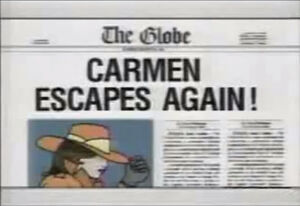 This would appear if the winning "gumshoe" (i.e. contestant) failed to capture Carmen in the bonus round of the PBS game show. 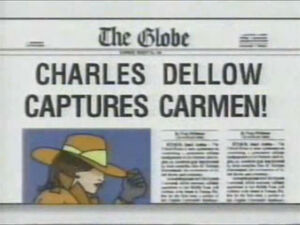 If the winner succeeded in the bonus round, the newspaper headline would feature his/her full name 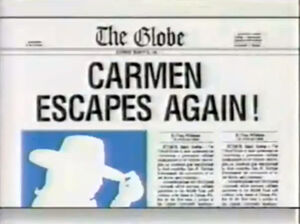 In the last two seasons, Carmen's image would disappear from the newspaper if she wasn't captured 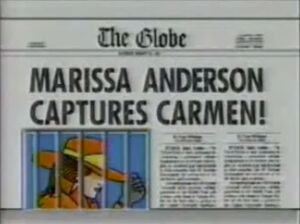 If Carmen was captured in the last two seasons, bars were added to her image in the newspaper 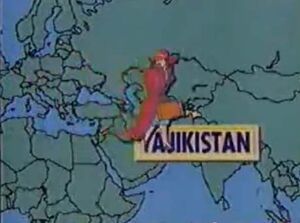 Retrieved from "https://villains.fandom.com/wiki/Carmen_Sandiego?oldid=3574798"
Community content is available under CC-BY-SA unless otherwise noted.