Queen of the Vampires

She was voiced by Sally Knyvette.

She is the former Queen of Vampires, the adopted mother of Laura and the second Lord of Shadow to be fought by Gabriel Belmont. She develops an obsession with Gabriel and upon first seeing him attempts to win him over to her side. However, he sees right through this and refuses. When she discovers that he's collecting the pieces of the God Mask to bring back his wife, she is enraged and attacks him. Gabriel defeats her and obtains the second piece of the God Mask.

As a human, Carmilla was a woman who loved life and could not stand to see vile experiments on the living like those that Frankenstein conducted, vowing to bring him to justice. She was also most likely religiously devoted to God as she spent her entire life fighting evil in his name with Cornell and Zobek.

As a vampire, most of her personality was twisted. She cares little for life as she killed most of the inhabitants of Bernhard castle, with the exception of Frankenstein. She is intelligent, manipulative, seductive and deceptive as she tricked Gabriel into drinking her blood and nearly tricked him a second time.

Despite this, she seems to still possess some humanity after turning into a vampire, as she tortured Frankenstein for centuries for his inhumane crimes, fulfilling the oath she made as a human to make sure he paid for his crimes. She also acts as a mother to Laura, suggesting she still has motherly instincts, despite that she had taken Laura from her real mother.

Carmilla also seems to be a seductress. She attempts to seduce Gabriel when he confronts her for the first time, and does so again nearly a thousand years later. While it is not proven, there are subtle hints that she may have had a romantic interest in Gabriel. She attempts to seduce him the first time they meet and offers for him to stay with her for eternity, saying that she can show him "many pleasures". Throughout their first fight, she also refers to him frequently as "my Gabriel". She also was visibly frustrated when she realized he was collecting the pieces of the God Mask to bring back Marie.

During her second encounter with Gabriel, she kisses him on the lips, and claims "I am yours now". She is angered further when Gabriel drinks Marie's blood a second time, and right before Carmilla is killed, she tries to kill Marie, probably out of spite since she couldn't have Gabriel. She seems to have wanted to keep Gabriel, as she was using her blood to make him loyal to her and her alone, showing a very dangerous obsession and abusive side.

Carmilla is the Queen of Vampires and one of the three eponymous Lords of Shadow. Three holy people who upon ascending to Heaven, left behind their dark half, who was reincarnated into demonic beings. Each Lord of Shadow ruling over one major Evil kind, the werewolves, the vampires and the necromancers.

Upon becoming the Queen of the Vampires, Carmilla turned Walter Bernhard's family castle into her own demonic Vampire Castle (a possible nod to the Demon Castle of the mainstream games). She summoned two powerful vampire-demons, Lieutenant Brauner and Commander Olrox to be her generals and bodyguards. She then plunged her entire country into an everlasting wintery night, so that daylight would never shine upon it and endanger her kind; and made the nearby Wygol Village as a "food supply" for her minions, who storm it on a regular basis. She also kidnapped a young girl named Laura whom she turned into a vampire.

The game's primary protagonist Gabriel Belmont sets out to kill the three Lords of Shadow, in order to assemble the powerful God Mask and resurrect his deceased wife. (Not knowing that he is but a pawn in Satan's plot.) After killing Cornell, the Werewolf King, he invades Carmilla's domain, killing her generals and storming her castle. Carmilla confronts him in her throne room and attempts to lure him by her side; (rightfully) claiming that he has no chance to fulfill his goal, even if he were to kill the three Lords.

At first, Carmilla flies over her Throne Room surrounded with a force-field protecting her against all attacks. Gabriel must avoid the continuous streams of lightning she unleashes towards him, and fight all her vampire minions to the last one. It is best to save Gabriel's magic for the second stage of the fight.

After a while, Carmilla starts destroying her Throne Room and reveals her true, bat-like form. She then starts to chase Gabriel to strike him with her claws, while still spawning vampires. Using a defensive force-field and Light Magic is quite useful against her. The more damages she takes, the bigger the chasm in the room becomes. She will also attack by summoning swarms of shadow bats, powerful lightning bolts, and lightning blasts that cause an electric explosion. In the end, it will cause a long cut scene during which Gabriel has to strike at the right time to impale her and kill her.

Carmilla returns in Lords of Shadow 2, in which she once again serves as an antagonist. Centuries after Gabriel Belmont destroyed the Forgotten One, became Dracula and all but wiped out the Brotherhood of Light, he fell into a slumber that lasted until modern times. He then sets out to regain his lost powers and weapons in order to defeat Satan once and for all and become mortal again. Moving between the present and the past, Dracula discovers that his Demon Castle itself is trying to keep him as the King of the Night, whom it needs to exist.

Carmilla manifests herself under her human aspect within some sort of dream and tricks Dracula into drinking her blood, which is poisonous to him. She intends to deplete his strength until she becomes able to take over his body and his kingdom, while proclaiming that she "loves" him and that they are bound by destiny. Dracula avoids its effect by drinking blood from his "resurrected" wife Marie, and tracks down Carmilla throughout the library onto the rooftop. There, Carmilla shape-shifts into Marie to trick him, but he recognizes his real wife despite Carmilla's deceit and drinks from her. Furious, Carmilla creates a jail around Marie and engages a long boss battle that can prove very challenging.

The first stage of the battle is very similar to that in the first game. Carmilla surrounds herself with a force-field and calls forth vampire warriors, while conjuring lightning bolts upon herself to cause a lightning shockwave or charging at him. Dracula must defeat her minions and strike her repeatedly with fire based spells, until her force-field breaks.

Carmilla then starts turning into black mist to warp through the arena and charge at Dracula, while and conjuring lightning bolts that run along the ground, while still calling forth vampires. This time, Dracula must wait until she turns back to normal and use ice spells to freeze her solid before striking.

For the third stage, Carmilla surrounds Dracula with afterimages of herself and conjures rings of lightning that close upon him, that must be jumped over. Dracula must destroy all the afterimages before attacking her, and gains from her the power to turn into mist.

Carmilla then conjures an ethereal guardian entity that strikes Dracula or tries and squeezes him, conjures gusts of wind to push him away, or hurls devastating lightning blasts. Dracula must first turn into black mist to enter Marie's jail and drink from her. Once again, Dracula must use ice spells to freeze her and pummel her. When defeated, she tears the jail open and attempts to kill Marie, only to get killed by Dracula. 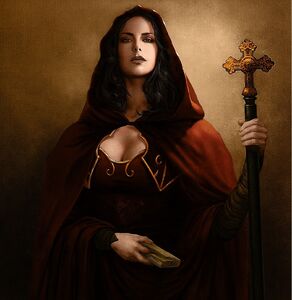 Carmilla during her youth. 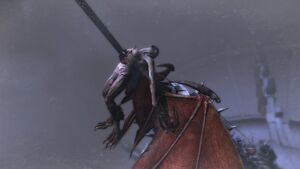 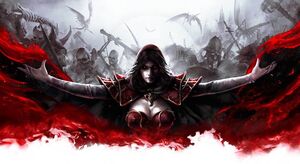 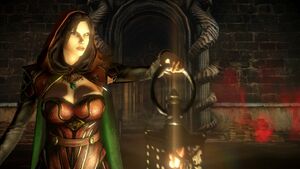 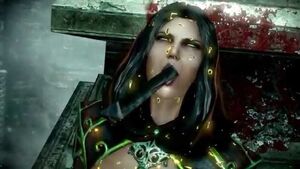 Carmilla's final death.
Add a photo to this gallery

Retrieved from "https://villains.fandom.com/wiki/Carmilla_(Lords_of_Shadow)?oldid=3906598"
Community content is available under CC-BY-SA unless otherwise noted.