Usurp rule over all vampires.

Make vampires the dominant species.
Herd humans in an enclave for her people to feed (all failed).

Carmilla is the secondary antagonist of Netflix's cartoon adaptation of Castlevania. She is a highly powerful Vampire Lady, loosely based off of the character of the same name from the video games.

She serves as the secondary antagonist of both the second and the fourth seasons and the main antagonist of the third season. Contrasting her devotion to Count Dracula in the games, she seeks to usurp him and take over the world. She develops a staunch enmity with Dracula's loyalist Isaac, who eventually proves able to let go of the past while she is consumed by bitterness.

She is voiced by Jaime Murray.

Carmilla is a tall, slender and beautiful female Vampire with pale white skin, crimson lips, icy blue eyes, and long, straight white hair. Although her face is mostly round, she has a rather pointy chin. She also has long, sharp, claw-like fingernails.

Carmilla is suave, poised and regal, but misanthropic and misandrist to the point of obsession. She is lascivious and domineering, enjoying to break men, as well as selfish, greedy, smug and cowardly.

She only fights with all odds in her favour and/or when cornered. While she is very cunning and manipulative, she overestimates herself, she is utterly incapable of accepting to be wrong, and is too ambitious even for her own good. Yet, she sincerely loves her "sisters" and is very close to them.

Carmilla is cruel, violent, sadistic and hateful, gleefully beating up helpless targets and fighting with rage. She only regards humans as food or pets, and wants vampires to rule Earth, under her control. She covets Dracula's throne for she deems him unfit to rule, and cannot fathom that he could love with his wife, instead of using her as a pet and sex-slave like she would have.

All in all, she is broken by ambition and hateful desire for retribution against "unworthy" men, showing every flaw she accuses them of. Her fixation on the idea of conquest rather than stability, as well as her inflexibility and unrealizable plans drive a wedge between her and her sisters, without whom her rule crumbles apart. Her inability to shed hatred proves her downfall, in stark contrast to Isaac who could focus on the future. Still, she remains unyielding to the very end.

Carmilla lacks the abilities of her game counterpart, but remains immensely powerful. She displays tremendous speed, agility, and strength, second only to Dracula himself. Instead of riding a giant demonic skull, she wields a blood-red scimitar with supreme skill, and can infuse herself with surges of lightning to boost her speed and might. She can easily fight and defeat several opponents at the same time. Yet, she can be worn out by too long battles.

Carmilla's past is only revealed through her own words. She sought the knowledge of her sire and became one of his brides, until he "went mad and cruel" and reduced her to an abused sex slave, prompting her to kill him. She took over the Austrian province of Styria (where the novel Carmilla takes place). She was curious to meet Dracula, being hinted to expect an inspiring conqueror worthy of fealty, but felt utter disdain to the broken shell she saw.

Carmilla is one of the Vampire Nobles selected by Dracula to form his War Council. She arrives late, announcing that the demon forces were defeated in the city of Gresit. She openly defies Dracula by asking why he did not turn his wife Lisa to a vampire, which would have kept her away from the corrupt and fanatical Bishop who burned her at the stake.

With the Vampire Nobles infighting due to Dracula trusting Isaac and Hector more than them and planning a genocide that would leave them unable to feed and doomed in turn, she increases tensions to further her goals. Upon learning that Trevor Belmont, Sypha Belnades and Alucard, Dracula’s son, have teamed up to destroy Dracula, Carmilla freaks out, knowing how powerful they are, but no-one heeds her warnings to take immediate action.

Dracula orders Carmilla to work with Hector and Isaac, and she takes profit of it to talk the undecisive Hector into attacking the Belmont Estate, and then the city of Braila which is not yet on Dracula's list, with the monsters he forged. Doing so, she plants doubt in his mind about Dracula's sanity.

With the vampires away sacking Braila, Carmilla has Hector raise the fanatical Bishop as an undead, to make him bless the water of the Danube River, and uses her army of vampires to ambush Dracula’s forces and make them fall into the holy water, destroying them. Right after, she drags Hector and has her troops attack the Castlevania.

As Dracula is about to kill all of Carmilla's forces by himself, Sypha's spell teleports the Castlevania away, displacing the blessed water that destroys Carmilla's troops, her and Hector barely escaping. After Dracula is destroyed, Hector has had enough of Carmilla and tries to get away, calling her twisted, but she viciously beats him up and chains him, claiming him as her slave whose demon will rebuild her forces.

Carmilla returns to her domain of Styria, her own Castle and her Council of Sisters. She plans to take profit of the chaos spread by Dracula's rampage and the power vacuum left by his death in a second bid for power.

Carmilla decides to seize Braila, which has yet to recover from Dracula’s attack, and to make it her enclaved food reserve. Her sisters point out the huge logistic difficulties of such a project, and that Hector will never obey after having been mistreated. But Carmilla refuses to listen to their objection, and she orders Lenore to gain his trust.

Lenore sets out to gain Hector’s trust, providing him with luxury, books, and false niceness, while instilling doubt in his beliefs and loyalties. She eventually tricks him into forging an army, before putting a magic ring on his finger to bind him and his creations to the Council, reducing him to a pampered sex-slave. He is forced to build an army for the Council, but Lenore obtains him the right to roam the castle as he pleases from the reluctant Carmilla.

As time goes by, Carmilla’s grip to sanity starts to loosens as her ambition grows boundless, much to her sisters’ dismay, now coveting the entire world. As Morana and Striga are fighting away for her, Lenore tries vainly to reason with her.

She retorts that she spent her entire unlife killing people to steal what she wanted from them, taking power back from "evil" men who did nothing but scorn and try to subjugate them. Carmilla complains that Hector is taking too long forging himself a new alchemic hammer, which Lenore tells him, but he retorts that quality takes time.

A few weeks later, Hector has provided them with an army of monsters, but Isaac teleports over their castle and invades it with his own forces. He reaches Hector, who seizes the opportunity to enact his long-planned rebellion, trapping Lenore in a cage of energy and sealing Carmilla in her throne room with a force-field. He then severs his fingers to get rid of the ring of enslavement and makes peace with Isaac, granting him his monsters.

Knowing that Carmilla is too powerful for him, Isaac has her harassed endlessly by his monsters, whom she all viciously slay, in a state of berserker frenzy. However, this gradually exhausts her, enabling him to barge in for the kill with his very best monsters in tow.

Carmilla scornfully greets him, asking him whether he is here to avenge Dracula. To which he replies that he forsook revenge, but admits that she is too much of a blight to the world to allow her to live. Maddened with rage, Carmilla attacks him but her best moves are countered by his monsters, who eventually overwhelm her.

Realizing that she is doomed no matter what, she chooses to die by her own terms and defiantly stabs herself with her scimitar, unleashing her power in a tremendous explosion that blasts the tower. But Isaac's familiar Abel managed to shield him.

Sensing Carmilla's demise, her sisters mourn her but admit that she had it coming. While Lenor bids farewell to Hector and commits suicide by exposing herself to sunlight, Morana and Striga leave Styria to build their future. In the end, Isaac seizes power in Styria and resolves to give it a brighter future, while Hector starts writing books. 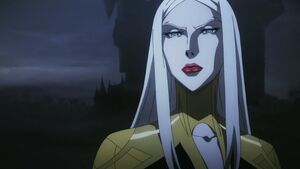