Rattlesnake of the Sands

Carmine Esclados is a major antagonist of the RWBY novel series, serving as the central antagonist of 2019's RWBY: After the Fall and the secondary antagonist of 2020's RWBY: Before the Dawn. She is a corrupt Huntress and a member of The Crown.

Carmine hails from Atlas, but trained to become a Huntress from Shade Academy in Vacuo, partially due to her distaste for the "unfashionable" school uniforms in Atlas. She was partnered with Bertilak Celadon. While at Shade Academy, she became familiar with the twins Jax and Gillian Asturias. The twins were convinced that they were the descendants of the former king of Vacuo, and despised that Vacuo had become a democracy. They additionally blamed the other kingdoms for Vacuo's fall, and sought to stage a coup and retake the kingdom. Carmine agreed with their viewpoints, and agreed to aid them when she and Bertilak eventually graduated. Even after Jax and Gillian were expelled and dropped out respectively, Carmine finished her training for the sole purpose of joining their new terrorist force, the Crown.

Carmine, along with Bertilak, were tasked with finding people with powerful or useful Semblances, then trafficking them to the Crown, where Jax would use his Mind Control Semblance on them to turn them into agents of the Crown and members of their secret army. While the money was good, Carmine's true intentions were to aid her friends in the fall of Vacuo, though Bertilak focused more on the money.

She and Bertilak were assigned the Caspians: the elderly, retired Huntsman Edward Caspian and his grandson, August "Gus" Caspian. One of them (they believed Edward) had the Semblance to amplify people's emotions, which, in times of crisis, made the threat of the attraction and attack of Grimm much higher. Carmine and Bertilak found the two, and posed as bodyguards for hire. Edward hired the two to take them from Vale to the settlement of Gossan in Vacuo, which was in the direction Carmine and Bertilak were planning to take them anyway. While Bertilak maintained a rude, snobbish attitude, Carmine did her best to feign a friendship with the targets to lull them into a false sense of security. They escorted the two to Gossan, but were plagued with Grimm attacks that wiped out whole settlements due to what they believed was Edward's malfunctioning Semblance. After the evacuations, they often took much of the credit for holding off the Grimm in order to boost their reputations. Even when they reached Gossan, they had to relocate when the settlement was destroyed by Grimm, making their way to the settlement of Feldspar.

RWBY: After the Fall

While in Feldspar, Carmine and Bertilak end up meeting Team CFVY, consisting of Coco Adel, Fox Alistair, Velvet Scarlatina, and Yatsuhashi Daichi, who escaped the Fall of Beacon and had spent the last year studying at Shade Academy. Carmine feigned kindness and hospitality with the students, even allowing them to go on guard duty with her to further trick them. However, both she and Bertilak were eager to get Edward away from the settlement so they could apprehend him, but he insisted on staying with the people.

When a sudden surge of emotion caught the surviving evacuees off-guard, Ravagers and a King Taijitu were drawn to the settlement, and Carmine aided the others in taking the Ravagers down. When the settlement leader Slate offers to have the people spread out a bit, Carmine enthusiastically agrees with her, seeing it as her and Bertilak's opportunity. However, Edward refuses, much to her disappointment. That night, Bertilak tries to get Edward away from the others, but they are tracked down by Fox and Velvet, and Bertilak uses the old man's memory loss and tenancy to sleepwalk as an excuse, with Carmine feigning relief that they got him back safely.

Edward and Gus, in an attempt to try and ease tensions, reveal that they are responsible for the "mood bombs" that have been attracting Grimm, but in an attempt to protect Gus from an angry mob, Edward lies and says that his Semblance is to amplify emotions, while Gus' is a Semblance that blocks other Semblances, and that he is trying to block his grandfather's. Bertilak pretends to lash out out, and Carmine pretends to calm him, though CFVY have their suspicions and feel that Carmine and Bertilak already knew of the Caspians' Semblances. Carmine and Bertilak they guilt trip Edward and Gus, and suggest they leave the others to "protect them", even grabbing Gus and Edward and trying to forcefully remove him from the settlement. This causes another mood bomb, which attracts Grimm. Carmine maintains the ruse by helping people evacuate, and uses the attack as a cover to let Bertilak kidnap Edward.

Bertilak escapes with Edward, and Fox goes after him. After finding Edward, Edward confesses to Fox that Gus has the emotional amplification Semblance, and that he has the Semblance to block other Semblances. When Bertilak hears this, he messages Carmine and attacks Fox, beating him.

Carmine receives the message, and sticks with Gus, pretending to be looking out for him when she is really looking for an opportunity to kidnap him. This opportunity comes when a sandstorm hits, and the fleeing tribe have to get on the shell of a massive sand turtle to escape the storm. Carmine kidnaps Gus and takes him away, and uses her own Semblance to kick up a second sandstorm to cover their tracks and kill off any potential witnesses.

Fox eventually defeats Bertilak with help from Edward, and Yatsuhashi uses his memory erasing Semblance to make Bertilak forget about kidnapping Edward or fighting Fox. Yatsuhashi and Edward track Carmine escaping with Gus and attack her, and Edward does his best to block her Semblance, but has to block Yatsuhashi's Semblance as well. Carmine fights off Yatsuhashi, stealing his sword and burying him in the sand. Bertilak wakes up, and with help from Gus, is led to believe that Carmine betrayed him, so he turns on her.

Carmine is infuriated at Bertilak's apparent betrayal and fights both him and Yatsuhasi off. She hurls sand at him, but he uses his heat manipulation Semblance to turn it into a wall of glass. The rest of Team CVFY arrive to help, and Coco fires her minigun at Carmine. However, Carmine uses her telekinetic Semblance to redirect the bullets at Velvet, and uses her weapons to stab Fox in the thighs. Coco hits Carmine in the face with her weapon, and Yatsuhasi and Velvet topple the glass wall on top of her. However, Carmine tunnels below them, and tries to drag Gus down to suffocate or escape with him. When Velvet tries to save him, Carmine grabs her too and tries to suffocate her in the sand. She then creates a series of sinkholes, trying to bury everyone. Edward manages to block only her Semblance, and Velvet manages to blast the sand away to reveal her, where she is captured by Yatsuhashi. Before Bertilak regains his memories, Team CFVY tie the two of them up, and the two are handed over to the authorities upon reaching the settlement of Coquina and subsequently imprisoned.

RWBY: Before the Dawn

A few months later, Carmine and Bertilak escape captivity and return to the Crown. Carmine blamed the failure of their mission on Bertilak, who was punished by being constantly drained of his Aura by Gillian's Aura Siphon Semblance; nothing more than a living battery.

Carmine was tasked with handling Shade Academy's growing suspicions and activity about the Crown. When Carmine discovered that Shade professor Xanthe Rumpole was investigating the Crown, she lured the teacher to the street fight club the Mirage. The two fought, and Rumpole was even able to destroy one of Carmine's sais, though Carmine triumphed. Rumpole was put under Jax's mind control, and forced to try and destroy Shade from the inside.

Gillian amplified Carmine's Aura for a following unknown mission. Upon her return through the Vacuo Wastelands, Carmine was attacked by several Jackalopes, and accidentally tripped a perimeter alarm in the fight. Coco, who is patrolling the area with her temporary team, Team ROSC, goes and fights the Grimm off before Carmine turns on her and nearly succeeds in suffocating her in the sand before the rest of her team intervene. As Death Stalkers close in, Carmine escapes.

Carmine makes her way back to the Mirage, where Velvet, Yatsuhashi, and Sun Wukong are investigating. Yatsuhashi is forced into the arena, and Carmine recognizes him and volunteers to be his opponent. She soundly defeats him with aid from her bladed heels, to which her cohort Umber Gorgoneion remarks that he will be the third person Carmine has killed in the arena.

Carmine instead delivers Yatsuhashi alive to Jax, who puts him under mind control. She is then tasked with being Gillian's bodyguard, as the Crown are ready to strike. As she attempts to carve a pathway for Gillian to join the battle, she is confronted by Velvet, Sun, and Octavia Ember. As Carmine and Velvet fight, Velvet questions why Carmine allied herself with the Asturias twins, to which Carmine reveals that she believes in their goals to destroy the kingdom and start anew. In a final effort to stop Carmine and Gillian, Octavia ignites a vein of Fire Dust. Carmine telekenetically throws Gillian to safety before the Dust explodes, collapsing the cave on top of all of them. While Velvet, Sun, and Octavia are able to survive, Carmine's fate is unknown.

However, Bertilak (freed from Gillian and renouncing the Crown), is adamant that the explosion and subsequent cave-in were not enough to kill Carmine, and that she escaped and fled. He goes off into the Vacuo desert, intent on finding her and taking revenge for her betrayal.

Carmine appears as a unit in RWBY: Amity Arena, being the only character that originated from After the Fall to be included in the game. When deployed, she uses her Semblance and Dust to create ranged storms that displace enemies.

Carmine's Semblance is telekinesis, which allows her to manipulate objects with her mind. However, her power is limited to small items. She mainly does this with the sand of the desert, creating sandstorms and sand projectiles to fight with. She also uses it on her weapons, an expanding pair of sais, to make them fight alongside her. She can also use her Semblance for defense, stopping projectiles and incoming attacks, as well as redirecting them. However, when her Aura is boosted by Gillain's Semblance, she is able to move things as large as people or large pieces of earth.

Like all other living creatures possessing a soul, Carmine has an Aura, an extension of her soul that serves as a defensive shield around her body that can heal minor wounds, though enough damage can deplete and eventually break it.

Carmine is exceptionally strong, able to endure multiple attacks as well as lift large objects like Yatsuhashi's sword with one hand. She is also a cunning and manipulative strategist as well as a convincing actress, fooling people into believing she is benevolent and kind when she is really ruthless.

Carmine acts kind, supportive, and chipper, but is in actuality ruthless, cunning, and sadistic. She is extremely manipulative, acting well to fool others into believing her false nature while keeping her true nature hidden. When she is revealed for what she really is, she is shown to be arrogant and petty, thinking highly of herself and mocking others for not being as powerful as she is. However, a constant in her personality is that she prides herself in her sense of style and flamboyance. 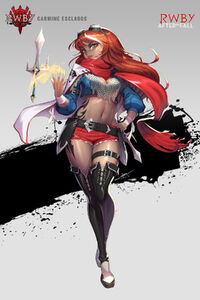 Carmine as she appears in RWBY: Amity Arena. 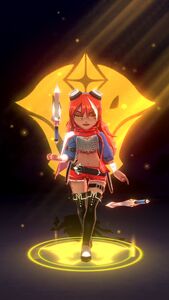 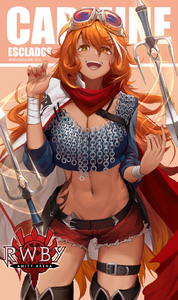 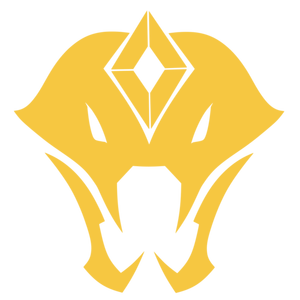 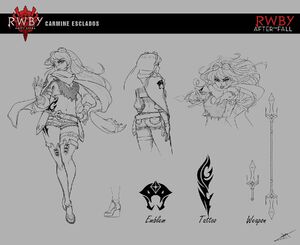 Retrieved from "https://villains.fandom.com/wiki/Carmine_Esclados?oldid=4134494"
Community content is available under CC-BY-SA unless otherwise noted.