Head of the Falcone crime family

Carmine "The Roman" Falcone is a DC Comics villain most prominently featured in the Batman comics and media, who is one of the overarching antagonists and controls much of the Gotham City criminal underworld, which is referred to as "The Roman Empire".

During the events of Batman: Year One, Falcone virtually runs Gotham City, with the mayor, city council, and Police Commissioner Gillian B. Loeb in his pocket. However, his power base comes under attack with the arrival of the mysterious vigilante, Batman, who quickly destabalizes much of Falcone's holdings and threatening his hold over the criminal underworld.

During the events of The Long Halloween, one of Falcone's private warehouses, containing millions of dollars in stolen cash, is found and destroyed by Batman and District Attorney Harvey Dent. Falcone convinces his longstanding rival, Sal Maroni, to kill Dent during the trial against him. Maroni throws a vial of acid at Dent, disfiguring the entire left side of his face, but not killing him. Dent goes insane and becomes Two-Face. At the end of the novel, Two-Face breaks into Falcone's mansion and murders him.

Carmine Falcone was eventually revived in The New 52 continuity and has returned to Gotham City years after being "run out of town" by Batman and Jim Gordon. He intents to rebuild his criminal empire and restore how crime in the city used to be run, before costumed vigilantes appeared in Gotham.

Falcone appears in Christopher Nolan's film Batman Begins as a major antagonist, portrayed by Tom Wilkinson. As in Batman: Year One, which a great deal of the movie's plot is based on, Falcone controls the criminal underworld and much of Gotham City; he is effectively above the law as most government officials are either on his payroll or afraid of him. He is briefly imprisoned and shares a prison cell with Joe Chill, the murderer of Bruce Wayne's parents. years later, Chill makes a deal with Gotham D.A. to testify against Falcone in return for an early release, but Falcone has him killed before he can reveal anything about Falcone's operations.

Bruce confronts Falcone at an underground establishment and tells him that not everyone in Gotham is afraid of him. Falcone dismisses the young billionaire as a harmless nuisance and tells him that real power comes from being feared. He then insults Bruce's father, saying that Chill told him that the elder Wayne "begged like a dog" before Chill shot him. Falcone finally has Bruce beaten up and thrown out.

Years later, Falcone goes into business with Dr. Jonathan Crane and Ra's al Ghul, smuggling a fear toxin into Gotham. Crane, who runs Arkham Asylum, diagnoses Falcone's henchmen as insane when they are arrested so they can avoid prison. Bruce, who by now has become Batman, foils the plot and leaves Falcone unconscious on the scene. While in prison, Falcone tries to blackmail Crane into allowing him a part in the upcoming fear toxin project. Crane instead gasses him with the fear toxin, literally scaring him out of his mind. He is left in a permanent catatonic state, muttering "Scarecrow..." over and over.

In the sequel, The Dark Knight, Harvey Dent mentions that Falcone is still institutionalized in Arkham Asylum, and that Sal Maroni has taken over the Falcone crime family in his absence.

In the beginning of the game, the Joker has the player assist Falcone's men in fighting the police, giving them weapons, and freeing prisoners. It is also mentioned that Joker is helping them in a turf war with the Penguin. When Bane comes to Gotham with his gang selling venom in the Falcone's turf, they hire Killer Croc and the player to take him down. Some other Falcone's later cameo in Penguin's cut scene.

Falcone makes an appearance in the animated film adaptation of the graphic novel as the main antagonist he is Gotham's most prominent crime boss. Batman attacks him and leaves him tied up naked to a bed in order to make him an example to all the other Gotham crime bosses. He also goes by the nickname "The Roman".  In this film, he was voiced by the late Alex Rocco (who was also known for portraying Moe Greene in The Godfather).

Although not appearing physically in the Batman Arkham video game series, Carmine Falcone is mentioned quite a through times through character dialogue and easter eggs.

In the prequel Batman Arkham Origins, Penguin kidnaps Falcone's son Alberto in order to convince him to tell his father to back out of the arms dealing trade, which Penguin is a part of. Alberto complied until he was rescued by the masked vigilante Batman, who had been causing trouble for Carmine's operations.

Carmine was mentioned to have been involved in Harvey Dent being scarred and his transformation into Two-Face, although Carmine remained a free man regardless of his involvement. Despite Carmine's hatred for the super-criminals of Gotham, he had himself unintentionally created one. It is mentioned in Batman Arkham Knight that the reason he targeted Dent was to get to Batman, who Dent had been a close ally to in the crusade in cleaning up Gotham's corrupt system and bringing down the criminal underworld.

In Arkham City, it is mentioned that Falcone's family had attacked a restaurant owned by the Maroni crime family, which left many members dead. Falcone and his family then fled to Bludhaven to get away from Gotham City. During the same game, it is hinted that Falcone had provided Scarecrow with a boat to use as his base of operations.

In a conversation with Calendar Man, it is implied that Carmine is the biological father of Selina Kyle/ Catwoman.

Falcone appears as the main antagonist of the first episode.

Batman: The Long Halloween, Part One

Carmine Falcone will appear in the upcoming 2022 superhero film The Batman. He will be portrayed by John Turturro, who also played Jesus Quintana in The Big Lebowski, Monkeybone in the film of the same name, John Shooter in Secret Window, the Rat King in The Nutcracker in 3D and the Goat in Green Eggs and Ham. 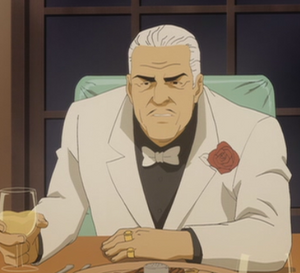 Carmine Falcone in Batman: Year One. 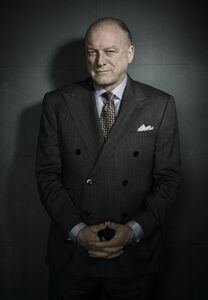 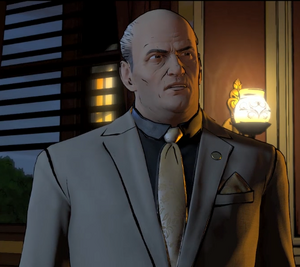