Take over Mary Jane (all failed).

Carnage is an enhanced version of the Venom symbiote created by Green Goblin and later perfected by the HYDRA scientist, Michael Morbius. Carnage is firstly a supporting antagonist of Season 2 of Ultimate Spider-Man but then returns as the main antagonist of Symbiote Saga turned major character in Season 4: Ultimate Spider-Man vs The Sinister 6.  Unlike its predecessors Venom and Anti-Venom, Carnage does not need a host in order to cause mayhem and acts as a Symbiote bomb that can spread itself over an entire city, creating spores of its symbiote to infect other people.

He was voiced by Dee Bradley Baker, who previously voiced the character in the 2000 video game, and has also voiced The Delightful Children From Down The Lane, Toiletnator, Commander Cody, Gravemind, General RAAM, Letz Shake, Death, and Ra's al Ghul.

Carnage has big white eyes, a tongue, mostly red with some black lines around its body that is similar to Venom symbiote except his hulking form and his body more red.

Like his mainstream counterpart, this version of Carnage has a crazed personality. It enjoys causing destruction and chaos to everything, always laughing psychotically while doing it.

As the S.H.I.E.L.D. Helicarrier was sinking, Green Goblin sampled Venom and left Harry Osborn and Spider-Man to die. With the Venom sample in hand, he sought to find the perfect host for it after his son Harry's failure of partaking the role. He chooses Peter Parker and captures him, injecting the enhanced Venom symbiote into Peter and due to his powers and intelligence, he was transformed into an entity that the Goblin named Carnage. Immediately breaking out of his chains, the Goblin then sent him to destroy Spider-Man and S.H.I.E.L.D., unaware that Peter himself was Spider-Man. Ambushing the S.H.I.E.L.D. team investigating at Harry's house, Carnage fought and defeated White Tiger, Power Man, Iron Fist and Nova. However, there was still part of the Venom symbiote inside Carnage that had a deep bond with Harry, allowing Harry to remove Carnage from Peter and take him instead, transforming him back to venom. Afterwards, Green Goblin takes the symbiote back to find the perfect host and a small piece is left behind, which is recovered by S.H.I.E.L.D.

Later in the series, Hydra scientist Michael Morbius attacked Agent Venom to collect a sample of his symbiote. After he succeeded, he head to a research facility and mixed the symbiote with Carnage and Anti-Venom with Dr. Octopus’ help, whom was forced to work for Hydra after his betrayal. As soon as Morbius was finished, he then summoned Hydra soldiers to subdue Doctor Octopus. Just then, Spider-Man and Agent Venom appeared. Doctor Octopus took out the Hydra soldiers and injected bat DNA into Morbius, transforming him into a humanoid bat, but not before the latter unleashed the symbiote upon Doc Ock. Once Morbius transformed, he escaped building while Carnage, as Doc Ock, fought Spider-Man and Agent Venom. However, Flash had problems controlling his symbiote as it completely disappeared from his body while Spider-Man was overwhelmed by Carnage. Flash tried to take on Carnage on his own, but is then assaulted by it. Spider-Man managed to remove it from Doc Ock with a device he made that emits sonic waves. However, Carnage then reappeared in human form, no longer needing a host and continued to fight them head on. This time, Carnage was more advanced and malicious as it began to laugh maniacally and was able to withstand Spider-Man’s attacks. Carnage then focused his attention outside and planned to infect people. As Spider-Man chased after him, it was actually a ruse to lure Spider-Man and attack him with ease. Just then, Flash managed to control his symbiote and became Agent Venom, who helped Spider-Man fight Carnage while Spider-Man fetched his device. This time, he and Agent Venom each used a sonic emitter on Carnage, causing him to explode. However, Spider-Man and Agent Venom soon noticed Carnage’s entrails infecting the people below, now realizing that Carnage was designed to be a bomb to infect people.

During the Carnage infestation, all of the Avengers were infected except for Captain America, whom he and Spider-Man fought a Carnage infected Hulk. The two of them struggle to fight him until Iron Fist, Cloak, Dagger and Agent Venom aided and helped save Hulk from Carnage. Meanwhile, an army of Carnage invaded Oscorp to destroy Harry. Suddenly, Harry transformed into Anti-Venom and jumped outside of the building, where he approached Spider-Man and his team mates. Instead of attacking Spider-Man, however, Anti-Venom used his powers to cure some of Carnage’s hosts. However, he then noticed Agent-Venom and intended to purge him from his symbiote. Spider-Man came up with a plan to lure Anti-Venom to a Carnage infected building, where it was producing Carnage symbiotes upon the city. His team mates stayed behind to fight off Carnage before being overwhelmed and infected by them while Spider-Man continued his way to the building with an unconscious Agent Venom luring Anti-Venom. Once Anti-Venom made it there, he headed over to the heart and prepared to cure it. Suddenly, the heart began to overwhelm him until Spider-Man managed to free Harry from Anti-Venom, who now knew Spider-Man's identity as Peter Parker. Once Harry removed his symbiote, however, it did not move as the symbiote required a host to destroy Carnage. Harry donned Anti-Venom again and went into Carnage's heart, causing it to explode and cure everyone in the city.

Large amounts of Carnage's heart spread across the city that began to move together to reform Carnage as a giant. It then made its move to Midtown High where Mary Jane is. As Spider-Man and Agent Venom tried to stop it again, it exploded and covered the entire school. As Spider-Man and Agent Venom entered the school and saw Carnage everywhere, they find Mary Jane, now infected as the Carnage Queen. Morbius then appeared and placed a device on the Carnage Queen, allowing him to take full control of her. Spider-Man took the controller from Morbius and tried to use it on the Carnage Queen to force Carnage to leave Mary Jane, but failed as Morbius told him that she is paired to Carnage for life. Carnage Queen then knocked Spider-Man unconscious. As soon as he regained consciousness, he found himself at the Shield Triskelion, where Crossbones forced him to grant them access to the confiscated Hydra rockets armed with Carnage symbiotes. Morbius then ordered Carnage Queen to destroy Spider-Man, but Spider-Man managed to free her by destroying the device on her head. Crossbones and the Hydra agents retreated while Morbius tried to drain life from Carnage Queen, but failed to do so and had his life drained from her. Carnage Queen was then about to destroy Spider-Man, Agent Venom and Iron Patriot for trying to control her until they revealed their true identities to Mary Jane to help her break free. They succeeded, but Carnage was still connected to Mary Jane. Fortunately, due to an experiment by Dr. Curt Connors, Mary Jane managed to gain control over the symbiote and use it to become Spider-Woman.

Carnage takes on the powers and abilities of his host organism. The symbiote grants the following powers:

Season 4: Ultimate Spider-Man vs The Sinister 6 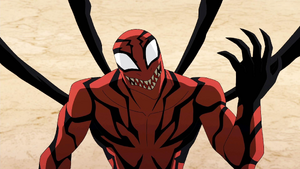 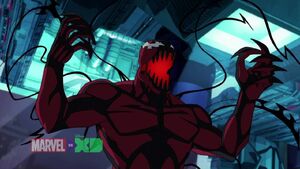 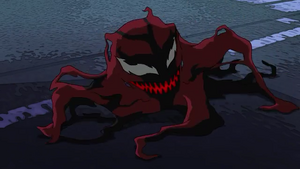 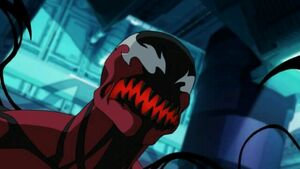 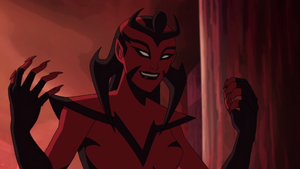 The Carnage Queen (featured in The Symbiote Saga, Part 3 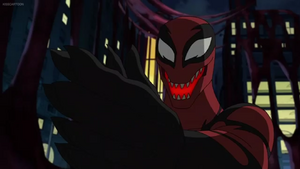 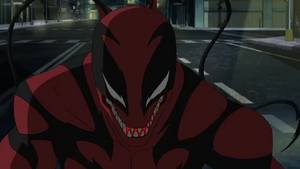 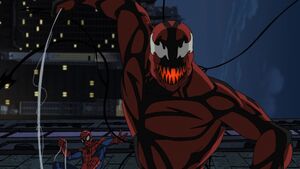