Kill everyone it can.
Destroy the Triskelion (all failed).

Carnage is an antagonist from the 2010 Marvel video game Spider-Man: Shattered Dimensions. It is a monstrous creature born from Peter Parker's blood and experimented on by S.H.E.I.L.D., which breaks out and causes mass murder and destruction. It is from the Ultimate dimension and appears in the Triskelion stage, which serves as the penultimate stage.

Its vocal sound effects were provided by Fred Tatasciore, who also voiced 8 in 9, and Poseidon in God of War.

Carnage was created after Dr. Curtis Connors combined a blood sample from Peter Parker/Spider-Man with chemicals from the Venom Symbiote. Carnage, driven by pure, violent instinct, began draining life from humans. Spider-Man stopped it with help from S.H.E.I.L.D., and allowed them to imprison the monster. However, S.H.I.E.L.D experimented on Carnage, creating symbiotic clones and eventually causing it to break out.

After the Tablet of Order and Chaos is broken in a battle between Spider-Man and Mysterio, the pieces are scattered across dimensions, with Carnage obtaining one. In the Ultimate Universe, Spider-Man goes to the S.H.E.I.L.D. base the Triskelion for help, only to find it destroyed. As he investigates, he finds the drained corpses of hundreds of S.H.I.E.L.D. agents, which zombify and are wrecking havoc. Spider-Man chases after Carnage, battling through hundreds of corpses as he pursues the villain.

Spider-Man eventually comes across a containment chamber, where clone versions of Carnage are held. They break out and attack, and Spider-Man has to fight them off. Spider-Man makes it outside to see that Carnage has crashed an entire Helicarrier. Carnage attacks with claws and spikes, but Spider-Man fights it off by kicking it into flaming reactors. Carnage flees and Spider-Man pursues, but has to escape another Helicarrier crashing from Carnage's clones. Spider-Man follows Carnage up the central tower.

Carnage is malicious and feral. It acts on pure violent instinct and subjects hundreds of people to agonizing death as it spreads as much chaos and destruction as it can. It is wrathful and monstrous, not backing down during fights and uncaring of any of its atrocious actions. 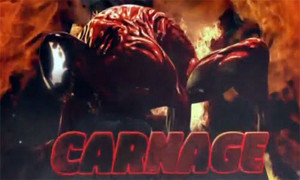 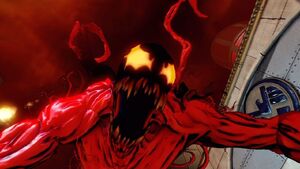 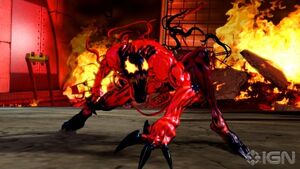 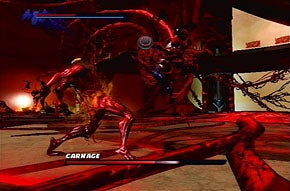 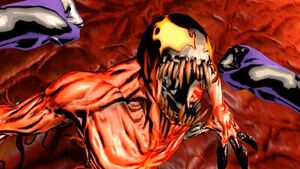 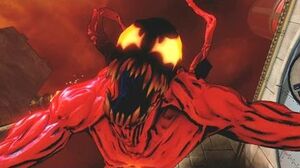