Note: This page is only about the incarnation within Spider-Man: The Animated series. For his mainstream version, see here.

Cletus Kasady, also known as Carnage, is a secondary antagonist in season 3 of Spider-Man: The Animated Series. He was an infamous criminal before Dormammu recruited and gave him his symbiote.

He was voiced by Scott Cleverdon.

Cletus Kasady was an infamous and mentally unstable criminal who apparently committed several atrocities that nobody would put on newspaper. He gets swarmed by the NYPD in his apartment building, attacking Lieutenant Terri Lee and then nearly exploding an entire city block before Spider-Man intervened and saved the day. Kasady was arrested and sent to the Ravencroft Institute for the Criminally Insane. After Eddie Brock re-bonded with his symbiote and thus became Venom again, Kasady was visited by Baron Mordo, who made him swear permanent allegiance to Dormammu in exchange for Venom's offspring, the Carnage symbiote. This was the same deal he made with Brock after he had brought the symbiotes back, in his plan to release Dormammu from his dimension. Kasady accepted, saying Dormammu "sounds like [his] kind of guy", and bonds with the symbiote becoming Carnage.

Carnage then meets up with Venom at Stark Industries, defeating Spider-Man and War Machine before stealing a portal device and retreating to Mordo's lair. Venom leaves Dormammu, who assigns Carnage with stealing human souls in order for him to exit his home dimension. Carnage manages to drain enough people (including Dr. Ashley Kafka and Lieutenant Terri Lee), but Spider-Man, Iron Man and Venom go to their lair and stop Dormammu from entering their world, thus returning the souls back into their bodies.

However, Dormammu's portal was still open because he linked himself and Carnage together, thus leading Venom to sacrifice himself by throwing himself into said portal to stop Carnage from pulling his lover Ashley in there with him. Carnage's fate after that is left unknown. 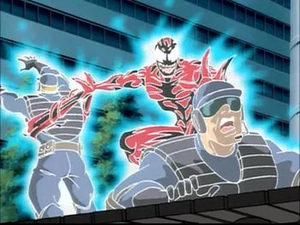 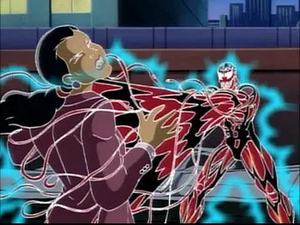