Unstable Monster
Carnage Kabuto is a minor antagonist from One Punch Man, serving as the secondary antagonist of The House of Evolution Arc. The ultimate creation of the House of Evolution, Carnage Beetle is a large beetle-like humanoid and their strongest warrior. Despite this, Dr. Genus considers him a failure due to his instability and unwillingness to follow orders, and because of this he was kept locked away in their basement.

Carnage Kabuto is a massive being, towering over the likes of Saitama and Genos. His appearance greatly resembles a horned beetle, with thick brown armor and spikes all over his body. He also has large, thin wings hidden under his armor.

Carnage Kabuto appears to be an insane individual, craving a massive desire for bloodshed. He is also very boastful about himself, calling himself to be far superior than the humans. Despite this, he is a very intelligent being, but also quick to anger.

Dr. Genus decides to release Carnage Kabuto once he learns all of his strongest warriors were defeated by Saitama and Genos, which his clones immediately freak out and disapprove. After Carnage Kabuto kills some of the clones, Dr. Genus convinces him to fight Saitama. He attacks Genos and invites Saitama to their training room, which was a large empty room where they could fight with their full power. Genos tries to intervene and attacks Carnage Kabuto, launching a powerful blast which Carnage Kabuto blows back at him by just using his breath. He proceeds to attack Saitama, but stops at the last minute and files away from him, cowering in fear as he senses Saitama's immense power.

Saitama, seeing how everyone was surprised at his power, decides to tell everyone how he obtained his power. After he tells he got his powers from a regular training routine, Carnage Kabuto feels insulted and decides to go all out on him, unleashing his Carnage Mode and transforming into a large purple form, which makes him go into a rampage for an entire week. Saitama receives all of his attacks but freaks out when he realizes it is Saturday already and he's missing a discount sale, punching Carnage Kabuto and killing him instantly.

During the Audio Book Genos, Training a virtual version of Kabuto effortlessly defeats Genos, Sneck and Metal Bat without his fighting spirit. However Zombieman is able to wear out and kill him due to his regeneration and Superalloy Darkshine is able to kill him in 15 minutes at full power. 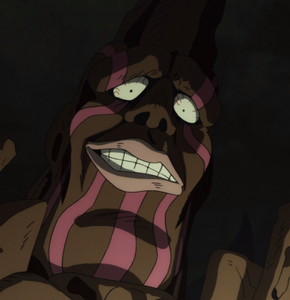 Carnage Kabuto's angry stare.
Add a photo to this gallery

Retrieved from "https://villains.fandom.com/wiki/Carnage_Kabuto?oldid=3890519"
Community content is available under CC-BY-SA unless otherwise noted.