Founder and chairwoman and majority shareholder of MomCorp

Carol Miller, better known as Mom, is the main antagonist of Futurama.

She is voiced by Tress MacNeille.

Mom owns and manages 99.7% of MomCorp, a large, multi-billion dollar industrial complex with numerous subsidiaries and a monopoly on robot production. Publicly, she retains the corporate image of a sweet, bustling old woman who often slips into the stereotype of a hapless grandmother (she wears antiquated clothes that greatly accentuate her bust and general figure, while using rustic similes and metaphors such as "squeaking like an old screen door"). However, behind the scenes, she is very malevolent, foul-mouthed, uncompromising, manipulative, chain-smoking, slanderous, cold-hearted, argumentative, and narcissistic. She routinely abuses her sons into submission, treating them like gofers. In the episode "Mother's Day", it is revealed that some of her vituperative bitterness originates from an ill-fated romance with Professor Farnsworth 70 years earlier, who, while reformatting the basic robot design, terminated their affair following savage rows about his work. According to Bender's Game, this has happened at least three consecutive times. Due to Farnsworth's increasing senility, he would forget why they originally broke up or that they had even broken up in the first place. In most/some episodes, she is shown to be successful, such as in "Attack Of The Killer", Mom as come out with the eyePhone to get the people of New New York into buying new phones that are inserted into their heads, recording everything they see. Mom also created Twitcher, so she can use information against consumers, as well as a virus to make followers zombies, so they will buy the eyePhone 2.0.

Despite her overall malevolence, Mom seems to hold Dr. John Zoidberg in high regard. She greets him like an old friend when he comes to ask for her help in saving Professor Farnsworth.

She occasionally attends charity functions as a way of boosting her public image, but really has no empathy for any of the people that she is supposed to be supporting and corroborative (in "A Fishful of Dollars", she describes one such gathering as "some charity BS for knocked up teenage sluts"). In the episode "The Tip of the Zoidberg", it is revealed by Dr. Zoidberg that her first name is Carol.

Mom has appeared in all of the four Futurama movies her role is only expanded in the third; in the others she appears only briefly. In Bender's Big Score, she is briefly seen hiring inter-galactic hit men to fight for her in the final battle. In the following film The Beast with a Billion Backs she is seen dancing with Yivo and later is briefly seen in the audience of Fry's church sermon to Yivo.

Mom serves as the main antagonist in Bender's Game. She tries to use one of two dark crystals to monopolize the dark matter industry. The Professor tries to prevent this, using the second crystal as a counterbalance to Mom's crystal and rendering the dark matter unusable as a fuel supply. During the ensuing events, the characters are transported into a Middle-earth-like dimension. In this universe, Mom is known as "Momon", a sorceress with a Medusa-like head of snakes. The crystal in this reality is a mystical twelve-sided die Momon created in a set of five that she lost and desires to get back. At the film's climax, Momon retrieves the magic die and uses it to obliterate the fantasy world as well as sending everyone back to the proper reality. Upon returning to the correct dimension, Mom is defeated when Igner and Professor Farnsworth cause the crystals to react, rendering her dark matter fuel useless.

She is also briefly seen at the end of Into The Wild Green Yonder when Fry reads her thoughts; she is silently gloating about how much money she has.

In Futurama: The Game, Mom appears as the main antagonist where she buys out Planet Express, which results in her owning 50% of the Earth, effectively making her Earth's ruler. She then plans to make Earth into a warship, but needs Farnsworth in order to help with the giant engine. Her plan succeeds, however, the crew of the planet express, that managed to escape earlier, travel back in time before the takeover of the planet express, foiling Mom's scheme (the crew dies in the process). Angry at the fact that Mom killed his crew, the professor refuses to sell Planet Express. This prompts Mom to bribe him with a sombrero, after which the senile professor does sell, again setting in motion the events that started the game.

Mom was included in the 2007 Forbes list of the richest fictional characters. She was ranked at #4 with an estimated net worth of $15.7 billion. MomCorp was also included in the list of "The 25 Largest Fictional Companies" which estimated its sales at $291.8 billion. Time named her one of the top ten worst moms ever. 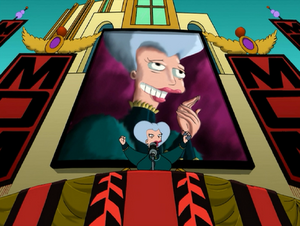 Mom calls for her robots to overthrow humanity. 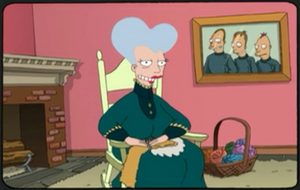 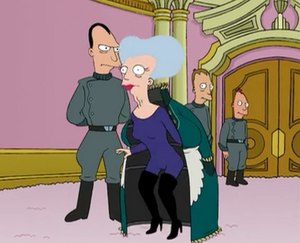 Mom slips out of her fatsuit. 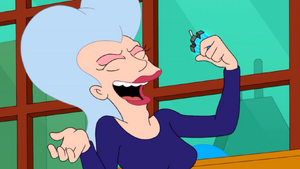 Mom in her youth. 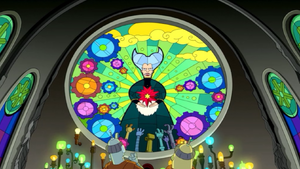 Mom is viewed not just as the robots' mother but their goddess. 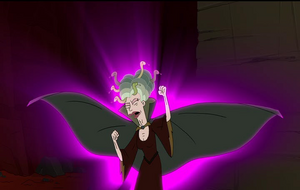 Mom in her Momon form, as she appears in Bender's Game.
Add a photo to this gallery

Retrieved from "https://villains.fandom.com/wiki/Carol_Miller?oldid=3375122"
Community content is available under CC-BY-SA unless otherwise noted.