The Real Boss (by Villanelle)

Head of the MI6 Russian Desk

High-level clearance in the MI6

Having sex with her "old friends".

Meeting with colleagues in public places.
Living her hobbies casually.

Assist Eve Polastri in tracking down Villanelle so she can lead them to the Twelve (failed).

Prevent Aaron Peel from selling his cyber-weapon (succeeded).
Manipulate Villanelle into killing Aaron so that the Twelve can kill her afterwards (failed, even though Villanelle did kill Aaron).
Ensure that Eve and Villanelle's relationship is severed (possibly succeeded).

Carolyn Martens is a major antagonist in the TV series Killing Eve, the live-action adaptation on BBC America of the Villanelle novel series written by Luke Jennings, being the deuteragonist of Series 1 and the overarching antagonist of Series 2. She will return in Series 3.

She is initially introduced as a well-respected high-ranking MI6 officer, who teams up with Eve Polastri in her pursuit for Villanelle and the Twelve. However, throughout the series, she is ultimately revealed as an immoral, cunning, ruthless, hypocritical and sociopathic manipulator who doesn’t care who she uses and betrays to achieving national security.

She is portrayed by Fiona Shaw, who also portrayed Ramona Linscott in The Black Dahlia, Lena in the 1993 Super Mario Bros film, Mombi in Emerald City, Marnie Stonebrook in True Blood and Father in the 1998 film The Avengers.

At some point in her early life, Carolyn joined MI6 and rose to become one of the agency's best high-ranking operatives, earning herself a reputation. One time in Russia, she had an "illicit" relationship with a Russian Intelligence agent named Vladimir Betkin. However, the relationship ended in the 1970s when she framed him for providing a lead on a plot involving plutonium sales. She has been said to have married a few times, where one of them eventually led to the birth of her son Kenny Stowton, who now still lives with her. At some point, she became aware of the existence of a dangerous yet highly skilled female assassin operating across Europe and Russia, and planned to find her.

In 2018, she is first seen meeting with MI5 members Frank Haleton, Eve Polastri, Bill Pargrave and Elena Felton about the assassination of controversial Russian politician Victor Kedrin, whose girlfriend survived and was under protection so she could make a witness statement. However, it doesn't go to plan after she is assassinated on Eve's watch, thus causing her and Bill to get fired. However, Carolyn meets with Eve and offers her a chance to find the assassin responsible, whom Eve rightfully confirmed to be female.

She then meets with Eve the next day and then brings her to her new office, revealing that she has been looking for the particular assassin for several years. She then allows her to bring a team together to find her, including Bill, Eve and Kenny, who became a computer expert. Eventually, Eve remembered meeting the assassin and this meant they could find her. However, they then learn that she wants Eve's attention after she uses the agent's name when assassinating Chinese colonel Zhang Wu in Berlin. Eve and Bill go to investigate, but it disastrously ends with her killing Bill.

Eve continues leading the search for the assassin, whose name was now revealed as Villanelle, and she discovers that Frank is a mole, which doesn't surprise Carolyn considering that he does look like a rat. She sends her and Eve to find him and bring him in for interrogation. They succeed by the skin of their teeth as Villanelle was sent to kill him. They bring him to a safehouse, where he reveals to Eve and Carolyn that he worked for the Twelve, who provided him with money for his children's well-being in exchange for information on everything, including MI5's activities and knowledge. That night, Eve visited Carolyn while she was having dinner with guests, saying that Villanelle came into her home and took her phone, wanting to kill Frank. They arrive at his safehouse too late as he was left castrated.

After gaining a lead in Russia, Carolyn and Eve head over to to country to interrogate Nadia Kadomtseya, who was one of the assassins trying to kill Frank and was now in a woman's prison. In Moscow, they meet up with her contact Vladimir Betkin and Konstantin Vasiliev, an "old friend" of hers. She makes a deal with Vlad: a meeting with Nadia in exchange for him knowing everything Frank told them before he died. The next day, they arrive at the interview room and talk to Nadia, offering her protection. Carolyn asks Vladimir for immunity and safe passageway for Nadia, but he refuses even after Eve tells him what they are investigating. That night, Carolyn reveals his relationship with Vladimir to Eve, and that the source for the plot was Konstantin.

Later on, she returns to the hotel and informs Eve that Vladimir had a change of heart and will give them Nadia. However, she then receives a call that Nadia was killed, apparently by another inmate named "Natalie" but Konstantin laughed off Eve's wish to meet her. Kenny is later revealed to be in Moscow, Eve theorizes that "Natalie" is Villanelle, but Carolyn refuses to allow them to investigate, ordering them to go back to London. In secret, she was trying to help Konstantin get Villanelle out. She later has a meeting with the assassin for unknown reasons, just after she had killed another inmate.

The next day, Carolyn was approached by Konstantin, who was being hunted by the Twelve for betraying them, and that Villanelle had escaped and kidnapped his daughter. Eve and Kenny arrive to confront her, but Carolyn and Konstantin explain the situation to them both. After breakfast and both Eve and Konstantin go to find Anna, Carolyn sends Kenny to pack up the equipment and threatened to fire him if he didn't while she went to meet up with Vladimir to get Anna protection. However, she learnt that Eve gave Vlad the love letters she exchanged with Konstantin. At the airport, Carolyn learnt that Konstantin survived being shot by Villanelle but didn't tell Kenny and Eve. As she and Kenny leave for London, she reveals what she learnt from Vlad and fires the both of them.

A few days afterwards, Carolyn set up a meeting with Eve in England, wanting to discuss what happened in Paris. Eve tells her that she only found Villanelle's apartment, claiming that it was "chic as shit", and that the Twelve are after the assassin now, but she doesn't know where she's going. After explaining that circumstances have changed and that she wants to rehire her, Carolyn then takes Eve to a morgue that had the body of tech businessman Alister Peel, whose name was written by Nadia before her death. Realizing that Peel may have in fact been murdered and that Villanelle is the primary suspect, Eve reluctantly agrees to investigate, secretly unable to trust Carolyn's intentions.

Carolyn assembles Kenny, wealthy Oxford graduate Hugo and MI6 agent Jess to help Eve investigate Peel's murder and she later introduces her to them. To investigate Alister's death, the two meet with his children Aaron and Amber, in which they inform them that he had been murdered. They ask them about a woman he had met with before his "heart attack" and if she resembled a Villanelle using a photo, to which they denied, much to Eve's happiness as it is someone new and would make Villanelle furious, thus would draw her attention. Carolyn later informs Eve that they found Villanelle and when they arrive at the location, she was already gone and had left her latest victim with a toilet brush down his throat.

Needing to get Eve protection, Carolyn brings her to see Konstantin in her house, revealing that he survived his wound but is unable to see his family, although MI6 are protecting them. Carolyn is later having dinner with Konstantin, exchanging funny stories with him. She refuses to tell him where his family are, knowing that it would compromise their safety, but she claims she would fine if she would never see Kenny again, only if she knows he would be alright. Later, Carolyn is disappointed with Eve making a deal with Konstantin behind her back to get Villanelle, only for Konstantin to betray her and escape with her. She tells Eve to stick with her side, saying that the two had chosen theirs and told her to find the assassin known as Ghost. She then meets with her angry superior at MI6, assuring her that everything is going to plan.

Later, after Villanelle sent a letter to Eve from Amsterdam, Carolyn made sure that she didn't receive it, and after Villanelle killed there, she sent Jess to investigate. After the Ghost was finally caught, Carolyn oversaw the interrogation, but she refused to reveal . However, after she displayed her fear of Villanelle, Eve suggested that they put a hit on herself and hire Villanelle to "kill" her so they can get her to interrogate Ghost, to which Carolyn approves. She has a psychologist assess the team, who says that Eve is too close to it, making the mission a no-go. Carolyn ignores it and goes ahead with the operation. As Eve later brings Villanelle to interrogate the Ghost, Carolyn and Konstantin are in a car watching from a distance. The plan works and Ghost reveals that Aaron hired her, wanting to sell a weapon of some sort.

Wanting to play the long game, Carolyn orders that they get close to Aaron to find out what the weapon is. Eve hires Villanelle to do so and to also not kill anyone, to which she agrees. Carolyn meets with Villanelle and Eve, explaining that the operation must involve no contact of any sort on the assumption that Aaron is monitoring everything, including his sister, whom Villanelle must get close to. During the mission, Carolyn is fencing while being updated of the progress. Eventually, Villanelle gets Aaron's invite to his auction in Rome, where he would be selling the weapon. Carolyn instructs Eve to make sure that Villanelle does not kill Aaron, needing to get to the weapon, which is later revealed to be a cyber-weapon that can access any form of existing information.

However, Carolyn told Eve this because she knew Villanelle would kill him anyway. After the Twelve displayed interest in the weapon and sent Raymond Algaron to meet with Aaron, she made a deal with him: if Villanelle killed Aaron Peel, he could kill her. Unsurprisingly, Villanelle does kill him, thus giving Raymond the green light. After Eve heads to her hotel to get the data, Carolyn meets with her, confessing that she arranged what happened and claimed that she was offering to take a noose off her neck, much to Eve's disgust, who refuses to leave Villanelle with her. After Eve threatened to tell Kenny what she did, Carolyn arrogantly revealed that he was part of the cleanup crew. She then meets up with Konstantin, who was in on the plot and gives him an address so he can see his family. Neither did they know, Villanelle survived her encounter with Raymond and was presumably out to get revenge on them. 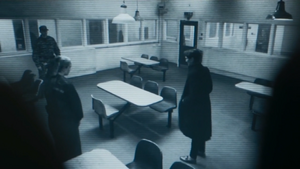 Carolyn meeting with Villanelle in the prison.
Add a photo to this gallery

Retrieved from "https://villains.fandom.com/wiki/Carolyn_Martens?oldid=3565434"
Community content is available under CC-BY-SA unless otherwise noted.