Get rid of the ghosts inside the Whipstaff Manor so she could collect the treasure for herself (failed).

Carrigan Crittenden is the main antagonist of the 1995 live-action movie adaptation of Casper. She is a glamorous, treacherous, and greedy heiress who discovers that Whipstaff Manor contains treasure, and seeks to obtain it so that she can become rich, while also planning to get rid of Casper and the other ghosts that are inside the house, which is theirs.

She was both portrayed and voiced (in her ghost form) by Cathy Moriarty.

Carrigan is quite furious to learn from her late father's lawyer Mr. Rugg that she has only inherited Whipstaff Manor in her father's will, rather than anything of significant value. Infuriated, she tosses the will and deed into a fireplace but it is rescued by her attorney and close associate Paul "Dibs" Plutzker. Dibs discovers one of the will's pages has an inscription on it describing treasure hidden in the manor.

Carrigan and Dibs visit the old manor, but find it is haunted by four ghosts: Casper, a friendly but lonely young ghost, and his three obnoxious uncles known as the Ghostly Trio: Fatso, Stretch, and Stinky.

The two make several attempts to remove the spirits, such as hiring both amateur exorcist Father Guido Sarducci, and Ghostbuster Ray Stanz (cameo appearance of Dan Aykroyd), and even a demolition team to demolish the manor altogether, but all are unsuccessful.

Later on, while she is a resting at a nearby hotel, Casper uses his ghostly powers to play the news report to Carrigan about of an afterlife therapist named Dr. James Harvey who explains that ghosts are simply spirits with unfinished business. Looking at the news report, Carrigan decides to contact Dr. Harvey.

After Dr. Harvey and his daughter Kat arrive at the manor, Carrigan and Dibs arrive shortly afterwards and meet them. Carrigan then orders Dr. Harvey to remove the ghosts as quickly as possible, and makes it clear he will not be paid until the job is done. However, things are complicated when Kat and her father meet the ghosts face-to-face; despite Casper's best efforts to befriend them, the two are terrified by both his appearance and the antics of the Ghostly Trio. They choose not to leave, however, and they stay for the night.

Carrigan and Dibs return to the manor a few days later, and see Dr. Harvey in the library with the Ghostly Trio. They decide to have a "happy hour" with him and drag him out of the manor. This allows the two to enter the house and they start looking around for the treasure. They follow Casper and Kat (who are now friends), to Casper's father's laboratory hidden under the floorboards of the library. There they learn that a special capsule containing an equally special potion is used to run a machine called the Lazurus. This has the power to bring ghosts back to life, but now there is only enough for one. They also see the vault at the end of the laboratory when Kat points in its direction while talking with Casper. While Casper and Kat explore the Lazarus, Carrigan and Dibs, believing the treasure is inside the vault, decide to get inside to see for sure. Dibs tries to open the vault, but cannot, so in a scoff, Carrigan tries her hand at it, but she has no better luck.

Realizing his one opportunity to come back to life, Casper with Kat's help, turns on the Lazarus and steps inside. Unfortunately, the capsule is stolen by Carrigan and Dibs before the revival process is completed, and Casper is left disappointed when he turns into an egg yolk. With the capsule in hand, Carrigan and Dibs realize that, as ghosts, they would be able to fly through thick solid walls like the vault to retrieve the treasure, and then use the Lazarus to come back to life. However, having no intention to die herself, Carrigan quickly grabs an ax and attempts (and fails) to kill Dibs with it.

After a few moments of satirical back-and-forth attempts to kill each other, Carrigan drives her car at Dibs in an attempt to run him over. Dibs, however, tosses a statue head at her car, damaging the windshield, before dodging her vehicular assault. She tries to turn around for another attempt at Dibs, but the loose gravel driveway coupled with her vehicle's speed provide little traction for her to turn, causing her to go zooming into the nearby woods instead. After a couple frantic seconds driving through the woods and being unable to see, Carrigan crashes her car into a tree. Her airbag immediately inflates, disorienting and frustrating her. As Carrigan fights to deflate the airbag and remove her seatbelt, she does not notice that her car, particularly the driver's side, is hanging over the edge of a large cliff. She opens the door, steps out of the vehicle without looking at where she's going, and falls screaming down the cliff to her death.

Moments later, Dibs makes his way out to the car to see what happened to Carrigan. He screams her name out over the cliff trying to see if she has revived as a ghost. After a few seconds of no answer, he assumes she did not become a ghost and is dead forever. He only seems to be sad that she had a favorite pair of sunglasses of his with her when she fell and turns and starts to walk away.

At that moment, she suddenly rises back up as a monstrous ghost to a shocked Dibs and then proclaims, "Not so fast, little man! The bitch is back!"

Back at the laboratory, Kat uses a dust bellow to reinflate Casper. Just as Kat finishes, Carrigan suddenly appears as a monstrous ghost, flies into the laboratory and grabs the treasure chest inside the vault. Casper, in shock, claims that it's his treasure. but Carrigan bellows, "You mean MY treasure!" Kat is shocked to see Carrigan as a ghost, and she replies, "In the flesh. . . . Well, in a couple of minutes, anyway," and unleashes an evil laugh. Dibs soon reappears and shows Carrigan the capsule to help her remember. Kat realizes that Dibs stole the capsule and claims that it's Casper's. Carrigan laughs and tells them to just sue her, and she orders Dibs to bring the capsule to the Lazarus to revive her. Just as he approaches, Casper steals the capsule back from Dibs, knocks him into the moat of the laboratory, and takes Kat back upstairs, where she greets the high school kids who have arrived for her Halloween party.

Casper and Kat return back to the laboratory, where Kat stops Casper from confronting Dibs for opening his treasure. They install the potion into the Lazarus, only to find Carrigan inside the machine, telling Casper that it's her turn in the oven. She orders Dibs to turn her human again, but he, having finally become fed up of her abuse and disrespect of him, turns on her, saying that they are through and motions his arm as if to throw and break the capsule, which would force Carrigan to remain a ghost forever. Seeing this, Carrigan gasps in shock, and tells him that she will never forget this betrayal. Unbothered by her threats, he declares that he will use the treasure to buy a great, big expensive house with lovely, purple wallpaper and great, big, green carpets, and adopt a little dog called Carrigan, saying she'd be "a bitch just like you!" He proclaims that he's got the power and he's got the treasure, which prompts her to angrily fling him out of a window to his presumed death.

With Dibs handled, only Carrigan remains. Casper and Kat then deal with her by sneakily pointing out that people only become ghosts because they have "unfinished business" and ask Carrigan what hers is. Carrigan arrogantly declares that she has no unfinished business, saying that she has her treasure, her mansion, and the potion that she intends to use to return herself to life. ("I have everything. I'm just perfect!") She laughs again, but her declaration suddenly causes her to start to cross over to the afterlife against her will. Realizing that she's been tricked, she desperately tries to take back her declaration before she berates Casper and Kat by calling them "rotten little brats" before she finally disintegrates and explodes, vanishing from the world of the living and into the afterlife forever.

Casper and Kat then open the treasure chest and discover that it contains an autographed baseball and a mitt, meaning that Carrigan got herself killed and crossed over for the rest of eternity all for nothing.

Carrigan was a nasty, greedy, spoiled, selfish, and cruel woman. She was tall, in her mid-thirties, with fair skin, and blonde hair. She dressed in expensive black clothing the entire movie; even after she dies, her ghost wears a skintight black body suit. Her late father had a huge fortune, but he didn't leave any of it to her, which deeply angered her; it was implied at the beginning of the film that this was due to their relationship being strained for some time prior to his passing, likely due to her spoiled, greedy behavior. Therefore, upon discovering that Whipstaff Manor the old mansion that he did leave to her may contain treasure, she became obsessed with possessing the treasure for herself.

She often treated the people she met with degradation, as shown in her behavior with Dibs, and when she berated Dr. Harvey for suggesting that it could take years to get Whipstaff's ghosts to cross over, topping it off with shoving a bouquet of obviously fake flowers into his hands.

Carrigan was also very persistent and demanding in her goals, shown as when she and Dibs continuously tried to kill each other to try to make each other a ghost. This was also displayed in how she seemed unbothered by her own death (despite it not being her intention) as she uses her powers to get the treasure, assuming the whole time she will be able to come back to life, and when she very rudely demanded that Dibs return her to life, the latter of which finally caused him to turn against her. 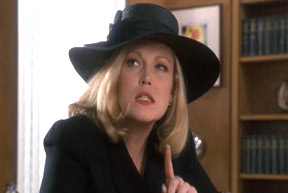 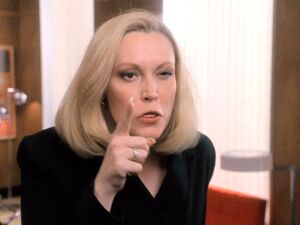 Carrigan threatens to sue the law office. "I'll contest it, then I'm gonna drag you and every one of those damn dolphins into court!" 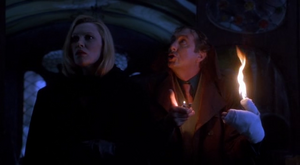 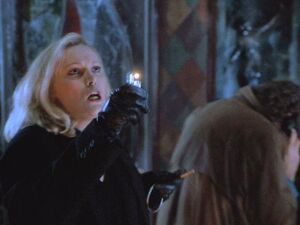 Carrigan demands an answer from a mysterious inhabitant inside the mansion. 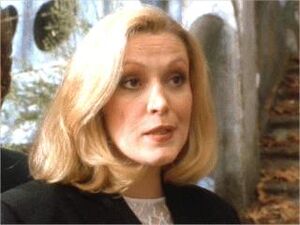 "What do I usually do when something stands in my way?" 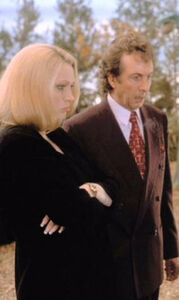 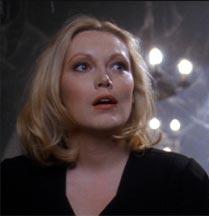 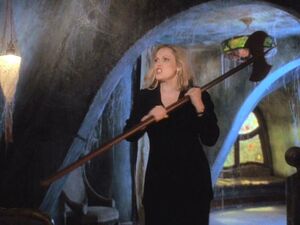 Carrigan tries to kill Dibs in order to have his ghost to retrieve the mansion's treasure. "Damn it, Dibs! This won't hurt a bit! Stop bein' such a weenie! It's just business! COME ON!" 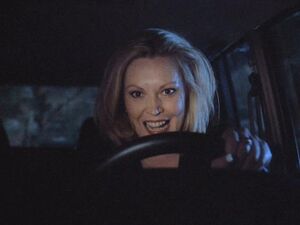 Carrigan's Evil Grin while she tries to run over Dibs... 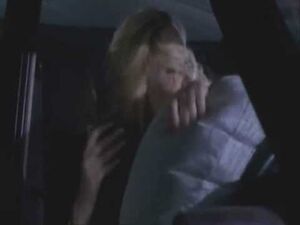 ...only to get a face full of airbag after ramming into a tree. 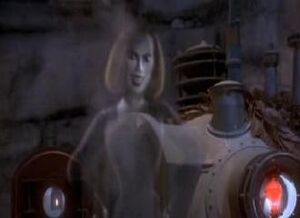 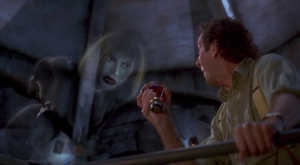 Dibs betrays Carrigan. "I am not gonna forget this, you ungrateful, lousy little worm you!"

Carrigan disappearing into nothingness while refusing to enter the other side. 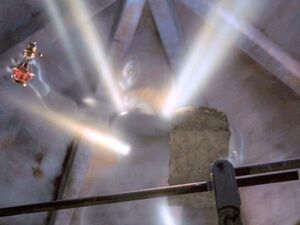 Carrigan in her arrogance, is unknowingly crossing over. 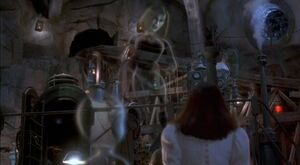 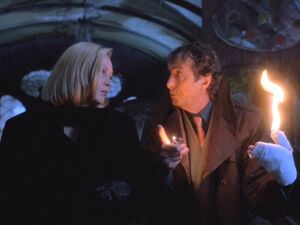 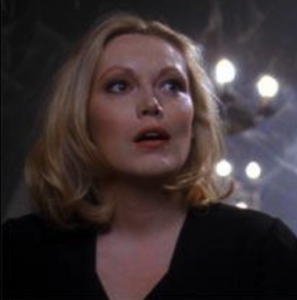 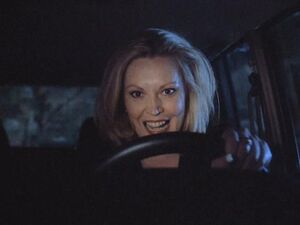 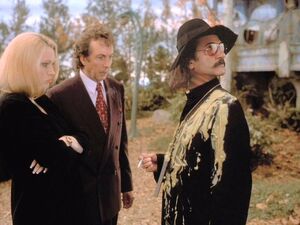 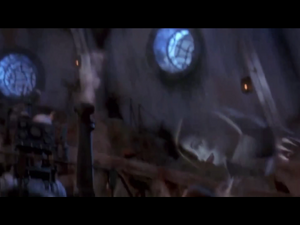 Carrigan zooms into the dungeon surprising everyone in her pale new ghostly form. 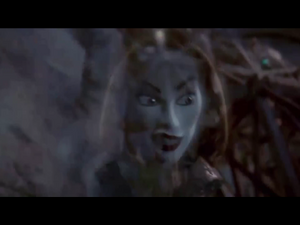 Retrieved from "https://villains.fandom.com/wiki/Carrigan_Crittenden?oldid=3611361"
Community content is available under CC-BY-SA unless otherwise noted.