Member of the Issue Family

Carta Issue is the commander of the Gjallarhorn Outer Earth Orbit Regulatory Joint Fleet and a major antagonist in Season 1 of Mobile Suit Gundam IRON-BLOODED ORPHANS.

She was voiced by Kikuko Inoue in the original Japanese version and by Carrie Keranen in the English dub.

Born to the Issue Family, the strongest of the Seven Stars of Gjallarhorn, as a child, Carta Issue grew up alongside Gaelio Bauduin of the Bauduin Familiy and McGillis Fareed of the McGillis Family and the three frequently played together.

When the Tekkadan arrived at the Earth Sphere, Carta rallied her Outer Earth Orbit Regulatory Joint Fleet to block Earth's perimeter and prevent Tekkadan from getting to Earth. However, by using a former Brewers ship to create a nanomachine smokescreen, Tekkadan's ship was able to slip past Carta's forces and land on Earth.

Determined to avenge her failure and redeem her honor, Carta descended to Earth with her elite guard to launch an attack on Tekkadan. Carta and her men attacked the Tekkadan forces and, in her Graze Ritter, Carta engaged Mikazuki in Gundam Barbatos. Carta diverted her attention however when she noticed Orga riding in a Mobile Worker driven by Biscuit Griffon and attacked it. Orga was wounded and Biscuit was critically injured, but before she could do anything more an angry Mikazuki assaulted her and damaged her mobile suit, only stopping to check on Orga. Taking the chance, Carta's men rescued her and retreated.

Saddened from having lost twice and feeling she had forsaken her family's honor, Carta received encouragement from her childhood friend McGillis to go out and face Tekkadan again. Unbeknownst to her, McGillis was secretly manipulating her to get her killed off so he could put an end to the Issue Family line and tilt the balance of power in the Seven Stars of Gjallarhorn.

Accompanied by two of her elite guard, Carta confronted Tekkadan again as they were traveling via train and challenged three of their fighters to face her and two of her men. However, determined to avenge Biscuit, a furious Mikazuki went out in Gundam Barbatos to face them alone. After swiftly destroying Carta's two men, Mikazuki faced Carta and brutally beat her mobile suit down. Despite her injuries, Carta refused to give up and continued to attack Mikazuki out of determination to avenge her family's honor. After her Mobile Suit was too damaged to continue functioning, Gaelio swooped in in his Mobile Suit to rescue Carta and flew off with her. Though she was critically injured, Carta demanded to be brought back so she could continue fighting Mikazuki but Gaelio refused. Hazily assuming it was McGillis who had saved her, Carta thanked "McGillis" for rescuing her before passing away. 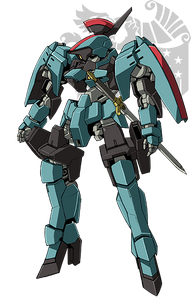 Retrieved from "https://villains.fandom.com/wiki/Carta_Issue?oldid=3816318"
Community content is available under CC-BY-SA unless otherwise noted.