Save Cynthia from the Speedway (failed)

Carter Daniels is a character from the movie The Final Destination, serving as a minor antagonist in the film.

He is one of the survivors of the McKinley Speedway and one of the people being stalked by death to bring his soul to the afterlife.

Carter Daniels is not shy about expressing his own racist ideology in public humiliation or hurting someone with a different skin color than him. His most common victims are African american males.

After the McKinley Speedway accident Carter Daniels becomes angry and vengeful towards to other survivors Nick O'Bannon and the security guard George Lanter since they both prevented him from saving his wife Cynthia Daniels who was still didn't make it outside in the safe zone. Carter Daniels targeted George Lanter first to do him being African american Carter attempts to get his revenge by setting a cross on fire on his lawn to he will come outside, giving Carter the opportunity to kill George and get his revenge, but death intervenes by making Carter tow truck drive on it's own and play the song "Why can't we be Friends" and Death locked the doors so Carter can't open the tow truck, Carter runs towards his truck to stop his truck and to turn off the music but a chain joined to his truck wraps around his foot and it makes him fall down fall resulting in Carter dragging in the road as the truck is moving skinning Carter's back as he is moving, the chain struck the ground and created a spark it begins to set on fire leading to Carter being burned alive while being dragged on the road screaming in pain, Carters pain is put to an end when the truck explodes killing Carter in a instant.

Carter with his wife 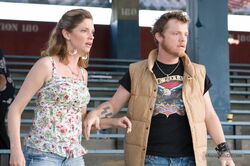 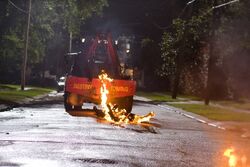 Carter's death
Add a photo to this gallery

Final Destination 4 - Carter's Death
Add a photo to this gallery
Retrieved from "https://villains.fandom.com/wiki/Carter_Daniels?oldid=3733067"
Community content is available under CC-BY-SA unless otherwise noted.