Conning people out of their money.

Stay in Drake Goodman and Patty Palmer's apartment for as long as possible without paying any rent.

Ruin their lives and destroy their apartment simply because he can.

He was portrayed by Michael Keaton, who also played the title character in Beetlejuice, Peter McCabe in Desperate Measures, Trip Larsen in King of the Hill, Chick Hicks in Cars, Ken in Toy Story 3, Raymond Sellars in the 2014 RoboCop remake, the Vulture in Spider-Man: Homecoming and Morbius and V.A. Vandevere in the live-action Dumbo remake.

Hayes is a con man who decides to rent an apartment owned by an unmarried couple, named Drake Goodman and Patty Palmer. Thereafter Hayes visits to view the vacant unit and immediately expresses a desire to move in. Hayes drives an expensive Porsche and carries large amounts of cash on his person, but is reluctant to undergo a credit check. He convinces Drake to waive the credit check in exchange for a list of personal references and an upfront payment of the first six months' rent, to be paid by wire transfer.

Before any of this money is paid, however, Hayes arrives unannounced one morning and shuts himself into the apartment. As days pass, Drake and Patty grow increasingly impatient when Hayes' wire transfer fails to materialize. From inside the apartment, sounds of loud hammering and drilling are heard at all hours of the day and night - though the door is seldom answered. When Drake ultimately makes an attempt to enter Hayes' apartment, he finds that the locks have been changed. Drake attempts to put an end to the constant noise and drive out Hayes by cutting the electricity and heat to the apartment, but Hayes summons the police and they side with Hayes by warning Drake that his actions are unlawful and could result in a civil suit.

Drake and Patty hire a lawyer, Stephanie MacDonald, to help with their case against Hayes. However, their efforts to convict Hayes are virtually undone by Drake's earlier attempt to disconnect the utilities. Hayes, safe from eviction for the time being, deliberately infests the house with cockroaches - which prompts the Watanabes to move out and plunges both Drake and Patty further into debt. The heavy stress takes its toll on the couple; Drake starts drinking heavily, and Patty has a miscarriage. Hayes visits the couple to offer his condolences, but an infuriated Drake attacks him and is arrested by the police - as Hayes had already called to the scene in anticipation of an assault.

The assault allows Hayes to file a civil lawsuit against Drake and assume control of Drake's possessions and identity (although the couple are not immediately aware of this). Hayes also files a restraining order, which forces Drake from the building. Once Drake is gone, Hayes begins stalking and harassing Patty, in a ploy to lure Drake back to the building in violation of the restraining order. The ploy succeeds, as Drake becomes increasingly leery and enters the building one night to check on Patty. Hayes confronts Drake in the hallway and shoots him, then plants a crowbar at the scene to prevent any criminal charges.

While Drake is recuperating in the hospital, the eviction is finally handed down and authorities force entry into Hayes' apartment. By this time however, Hayes has vanished without a trace, and the apartment has been completely destroyed and stripped bare of all its appliances, light fixtures, wood paneling and even the toilet.

Some days later, while cleaning out the apartment, Patty finds an important clue: an old photograph of Hayes as a young boy. Written on the back of the photograph is the name "James Danforth", which Patty correctly surmises is Hayes' real name. She phones Bennett Fidlow, the Texas attorney whom Danforth had provided as a reference when he first moved in (albeit under his Hayes alias). Fidlow tells her that he merely represents a trust established for Danforth and his brother, that Danforth has a long criminal record, and that he has been disowned by his wealthy family.

Patty travels to Danforth's last-known address, a condominium in Desert Spring. There she finds Ann, his girlfriend and previous co-conspirator who had earlier come looking for him in San Francisco. Ann tells Patty that Carter Hayes is the name of the property's former landlord, and that Danforth assumed Hayes' identity and took possession of the condominium after Hayes hired two thugs to carry out the assault shown in the film's opening scene. Ann also shows Patty a postcard from Danforth, written on the letterhead of a hotel in Century City, which had arrived in the mail just the day before.

Patty tracks down Danforth at the hotel, where he has checked in under Drake's name. Patty bluffs her way into his suite by posing as his wife, and while rummaging through his personal effects she discovers he is using legal and financial documents in Drake's name. She calls Drake and tells him to cancel all of his credit cards and freeze the couple's joint bank account. She then places an exorbitant order for room service, which leads to Danforth being arrested.

Danforth is bailed out of prison by a wealthy widow, Florence Peters, whom he was apparently vetting to be his next victim. Once out on bail, Danforth returns to San Francisco to seek revenge against Patty and Drake. Upstairs, he bludgeons Drake with a golf club, then attacks Patty in the downstairs apartment where she is busy making repairs. A struggle ensues between Patty and Danforth, and a badly wounded Drake makes his way into the crawl space between the basement and the first-floor apartment. He reaches through a hole in the floor and grabs Danforth by the ankle, causing him to fall backward onto a broken water supply pipe, which fatally impales him. 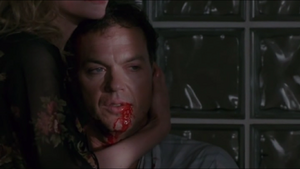 Hayes after being beaten by two men for fiddling several people 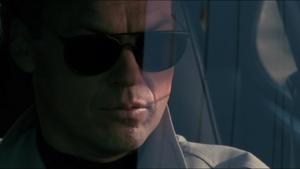 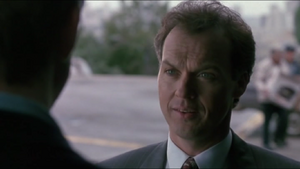 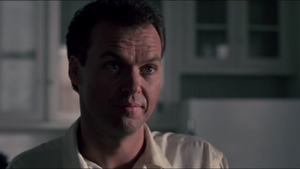 Hayes unexpectedly invites himself into the rented room, to Patty's surprise 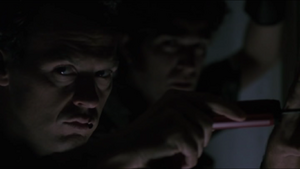 Hayes begins hammering and drilling through all hours of the night, infuriating Drake 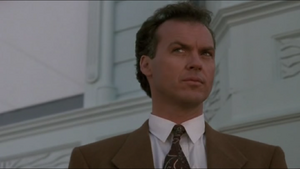 Hayes contacts the police after Drake attempts to disconnect his utilities 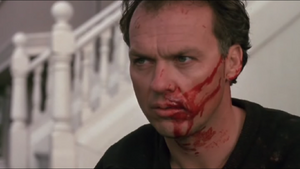 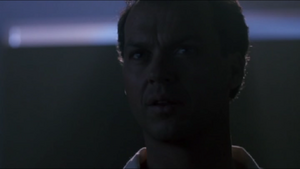 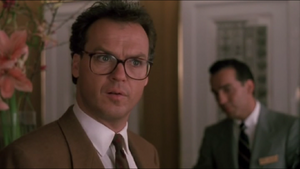 Danforth becomes suspicious that Patty is spying on him, after she tracks him to his hotel 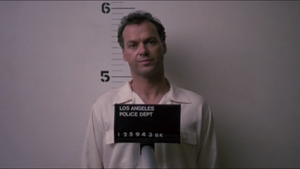 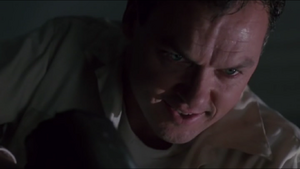